Paul Atkinson on his All Ireland Cup RD1 victory 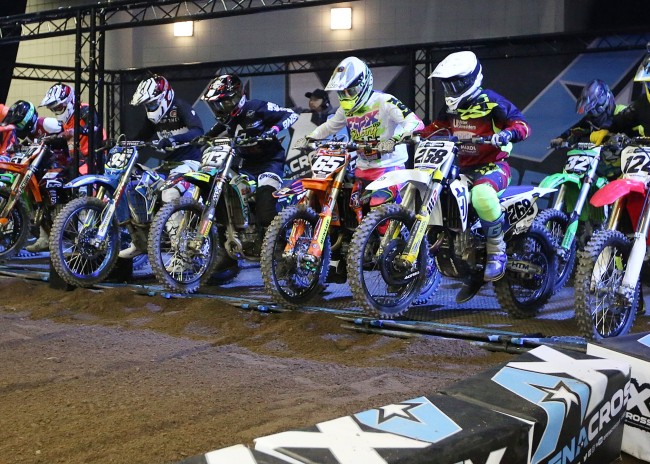 There was a surprise winner during the first round of the All Ireland Cup at Belfast Arenacross as Paul Atkinson won the first night of racing.

It came after four riders jumped despite a yellow and it led to all four of them being disqualified from the race – it promoted Atkinson to the top step of the podium.

“It was a big surprise to get the win with some of the other guys getting disqualified for jumping on the yellow flag but the rules are the rules and thankfully it fell in my favour. It’s not really how I would like to win but a win is a win and I’ll take it for sure! I couldn’t stop laughing when they told me I had won. I couldn’t believe it, it was an awesome experience all the same and one I’ll never forget”, Atkinson told GateDrop.com.

Atkinson rides the Ulster and Irish Motocross Championships so isn’t used to the intensity of Arenacross but is happy to come away from the weekend with a round victory and finishing second in the series after both nights of racing.

“The Arenacross is really deceiving as when your up in the stands watching everything looks like it flows so well especially when you watch the pros but when you actually get down on the track it’s completely different and a bit nerve racking! It was a last minute decision for me to enter so I had no preparation and was running a completely stock suspension. It can be hard to get your head around it as its completely different to Motocross and takes a lot of commitment to get it right, here we have no facility to practice anything close to Arenacross and its the only time we get to ride whoops and rhythm sections so it’s all new to us. It’s a big learning curve even with the bike setup and surviving the weekend without getting hurt and it can be hard enough on its own”, added Atkinson.

“I really enjoyed the weekend,  its an awesome experience and to race in the SSE Arena in front of so many people its pretty exciting! So, I’d like to say a big thank you to my mum, dad and Megan for the support week in, week out. Also thanks to Ulster Shredders, HTM Offroad, Avenue recycling and Maxol lubricants, Physio room Ballyclare. Without them I wouldn’t be able to go racing”, Atkinson concluded.

During the second night of racing James Mackrel won and ended up winning the championship on his KTM.

“The first night was quite unfortunate with the yellow flag situation but I enjoyed having a good race with Jordan Keogh and Jay Mccrum. On Saturday the track suited me much better but after a big crash in the Pro Lites heat one I rode stiff the rest of the night”, Mackrel told GateDrop.com.