Chase Sexton and Eli Tomac on their title showdown 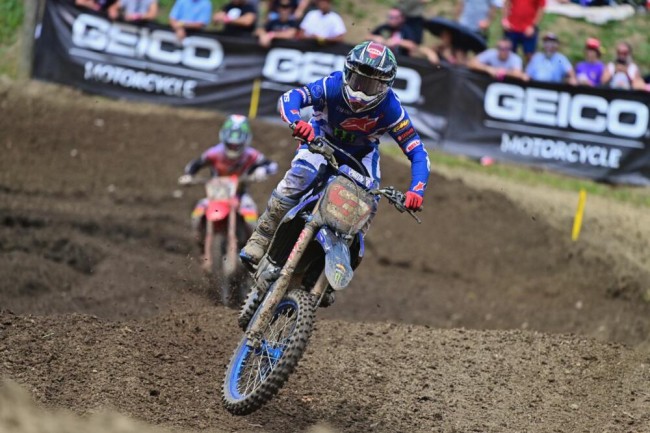 One point, one round and two motos left for Chase Sexton and Eli Tomac to decide who wins the 2022 450 US National outdoor championship. It’s been one of the most intense seasons ever with Tomac and Sexton going at it, bar to bar, for a large part of the season and it has an eerie reminder of the McGrath v Emig finale back in 1996 that saw Emig rise under pressure to emerge victorious in the final moto showdown.

This time it is Sexton and Tomac under the microscope with Tomac vying to end his outdoor career on a high as Sexton searches for his first 450 title against one of the best to ever do it knowing it’s his last chance to beat Tomac for a championship outdoors.

This is what the two title combatants, and about to be MXoN teammates, had to to say about heading into the Pala pressure cooker this weekend, and elevating the speed of motocross (Jeffrey Herlings might disagree!)

Sexton: “This is what I worked for I can’t say it’s a pain because I would rather be in this spot than third in points and not even close. it doesn’t seem like either of us can get away from each other, especially after Budds Creek, I knew this weekend was going to be another showdown. This is the first time I’ve ever been in contention outdoors ever, it’s gnarly. I go fast there (Pala) but I am going to have to focus and give it all to the end, I think it’s going to be another battle. You can’t get ahead of yourself, just put it all on the line again.

“My goal is to win and that’s Eli’s goal, it’s going to be fun. I think for me, racing him this summer has elevated my riding to somewhere I’ve never been before so that’s something cool. it is helping me for next year but I am looked in on one thing right now, and that’s to win, that’s my goal but it’s definitely taken, at least me, to a new level.”

Tomac: “For me it’s been one of the most exicting seasons I have had as a racer and a rider. I’m loving the challenge, neither of us want to give an inch. Just had a lot of fun doing it. It’s been an exciting year. I’ve never been this close in the points, obviously, at this point in time in the series. I think we both have elevated the speed of motocross, to be straight-up. That’s just the way it’s been. It’s like every weekend we either flip-flop one and two, or whatever. Even Budds Creek was crazy. It’s been a lot of fun. It’s going to be a barn burner until the end with two motos to go. It’s been enjoyable. We’ll see what happens. May the best man win. There’s no letting off. There’s really no gifts at this point.

“However it ends, it’s been a fantastic year for myself and the team. Like I said, I don’t feel like I’ve ever been in this position like this. So, it’s cool. We’ll see what happens.”

Get Jeff Emig’s view on his title showdown with McGrath and watch the 1996 duel below: