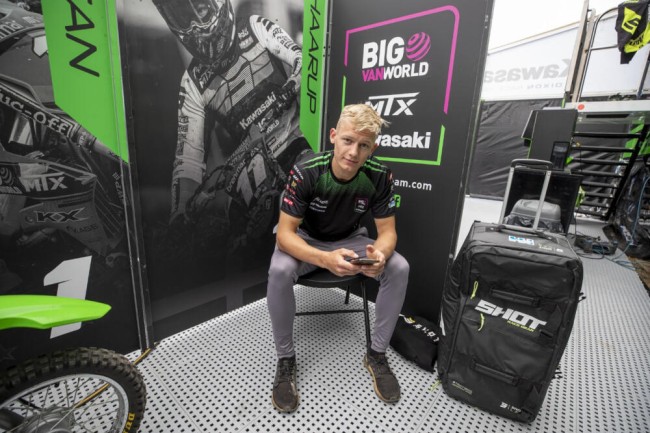 Saturday we had some technical issues and in the qualifying race when Mikkel landed after a jump the engine stayed revving higher than normal – coming into the pits cost him two laps making sure it was safe. He did head back out and put in some good lap times although had to settle for 35th. Despite having second to last gate pick Mikkel rode two outstanding races, coming through the pack to 8th in both. Physically he couldn’t have done more, it was always going to be difficult. At this moment in time, we’re chasing our tails a bit – fixing one issue and another pops up. This is hard when you only have a few days inbetween races.

It’s tough as a technical team not to be able to respond to the changes we need to do due to long manufacturing times; although these things happen at all levels up to F1, it’s never easy. We’ve had 4 podiums this year but we know it should be higher, so we’ll focus on ending the season on a high. We are still in 5th in the championship heading to Lommel this weekend, so we can hopefully look to get some solid points in.

“It’s been a tough time as I have been recovering from COVID which took me out of action for a whole week, we analysed and solved issues from Indonesia, and then we had new issues this weekend with the exhaust valves which we have manufactured – which we have been using for the last few years. We have more analysis going on before Lommel. There are changes we want to make, but the trouble is the lead times on some parts are up to 3 months. It’s disappointing for us that we are losing valuable track time and qualifications positions for Mikkel due to these issues but we are all working as hard as we can to allow Mikkel to ride how he needs to and get the results he deserves – his riding and effort are second to none.”

“We had to start from the party tent after yesterday but we gave it everything today and came away with seventh. Particularly in the first moto I worked my way so hard through the pack but starting outside the top-twenty from that outside gate was tough and towards the end I was done from the effort. But that’s racing; it can’t always go as planned and we kept on fighting for decent points. The result could have been better but I enjoyed myself out there and gave it 100%; I’m a tough guy and must have made fifteen to twenty passes each moto. There was never a time when I gave up and hopefully we can turn it around results-wise at Lommel next weekend.”