Interview: Kirk Gibbs – I think we could have been on the box! 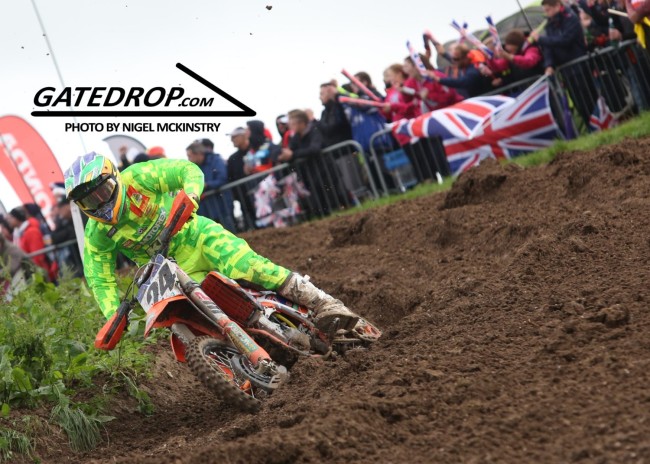 There is no doubt that the Aussie’s come into the Motocross Des Nations with a strong team but they had a great event. Australia ended up sixth overall which is a strong result.

Kirk Gibbs has been played second fiddle to Dean Ferris mostly in the Aussie MX National series but he brought his ‘A’ game to the Nations. He showed some great speed as he ran with some of the best riders in the world.

Gibbs ended up sixth overall in the open class and beat the likes of Kevin Strijbos, Tanel Leok and Fredrik Noren to name just a few. Gibbs definitely impressed at the first time for him competing at the event and certainly didn’t show any nerves.

We decided to catch up with the Aussie to get his thoughts on the event and a range of topics.

Gatedrop: Kirk, this was your first Motocross Des Nations. What’s your thoughts on the event and can you talk me through your day?

Kirk Gibbs: Yeah, really awesome. I’ve always wanted to come to one of these but it hasn’t happened until this year. What an atmosphere and the racing was incredible. The track was unbelievable, I really loved it. Saturday was really good and obviously it was a bit wet today but I had pretty solid results. The last moto wasn’t quite so good, I didn’t get a great start which made it tough. All in all, I’m really happy with my first outing at this event and I would love to come back.

Gatedrop:  You’ve been in England for a week prior to this event I believe. How have you found England and how’s it compare to back home in Australia?

Kirk Gibbs:  Yeah, completely different. The weather is a lot colder and the track here was a lot bigger. The biggest track we ride back would be would be in around a minute twenty, a minute thirty. It means we do heaps of laps whereas here you just do twelve or thirteen laps. But, yeah, I really enjoyed it. I like it here and I had heaps of fun.  I’d love to even do more racing over this way as I’ve really enjoyed it.

Gatedrop:  It was a really good weekend for the Australian team, do you think that will help put the country back on the map in the motocross world?

Kirk Gibbs: Yeah, it does. After Saturday you know everyone thought we were on the radar. I think Dean just had a little off day today and Hunter rode unbelievable. I had one good race in there but unfortunately a bad second one. If we put more pieces to the puzzle I think we could have been on the box or at least close so I definitely think in the next couple of years everyone will be looking out for us.

Gatedrop: Hunter Lawrence left Australia a few years ago. How impressed are you with him now and do you think racing the World Championship has really helped him grow?

Kirk Gibbs: Oh amazing! The kid is unbelievable. You know he’s eighteen years old and just look at Zach Osborne, he’s probably the quickest guy riding a 250f right now and Hunter just beat him overall. So yeah, what do you say about the kid? He’s eighteen and he’s riding unbelievable. I think him and his brother (Jett) have got a massive, massive future. I just hope they both stay healthy. They’re going to be the next guys besides Chad (Reed) and Brett Metcalfe and all those sort of guys. They’re the next guys coming through from Australia.

Kirk Gibbs: It was alright. I came back from a broken femur so the preparation wasn’t that great coming into it. I had a decent season but I didn’t really find form until I’d like to say the last half but I had a little bit of bad luck here and there. Dean (Ferris) was on point so it made it tough. I did steal a couple of wins away from him but he was really riding well there. I was happy with the way it ended and the way I rode here. It’ll be good going into the off season healthy and then build for next year.

Gatedrop: In terms of next year, have you got any plans sorted yet?

Kirk Gibbs: I haven’t signed anything but most likely I will be in Australia. You know I’m not getting any younger and I would like to go and race overseas somewhere but it’s tough at the moment.

Gatedrop: Would you have any preference whether it’s world motocross or the AMA Nationals? Dean Ferris has already showed you could be competitive there by his impressive ride earlier in the season!

Kirk Gibbs: No, no preference. I’d like both, it wouldn’t bother me. The only thing is that I’m not much of a Supercross rider so most likely it would be to come here because of that.