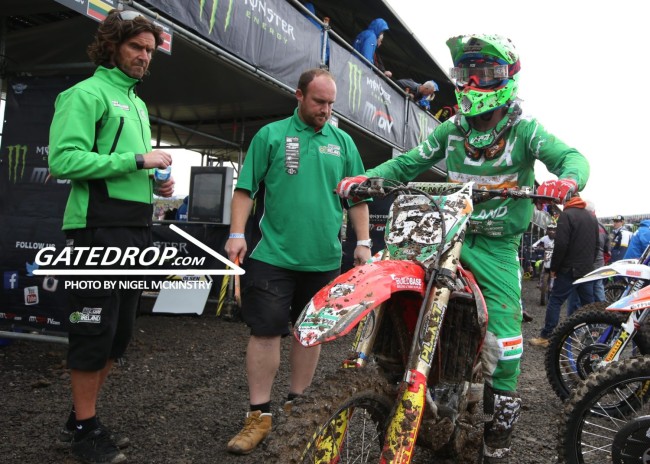 It was a good weekend for Team Ireland at the Motocross Des Nations as they managed to avoid the B final and go straight into the main event. All three riders give it the best they could and Ireland ended up fifteenth overall which is a very good result.

Martin Barr showed some good speed on his Buildbase Honda battling with MX2 GP riders over the course of the weekend such as Cervellin, Jacobi, Van Doninck and Ostlund just to name a few.

We caught up with Martin after Matterley Basin to get his thoughts on the event.

Gatedrop: Martin, it was a good weekend for Team Ireland here in Matterley Basin. Can you just talk me through your weekend?

Martin Barr:  Yeah, it wasn’t so bad. You know obviously we made it a lot easier for ourselves going straight into the A final this year. We all rode pretty strong and solid during our heat races. I was quite happy with my heat race finishing in fourteenth although I mucked up a little in the middle making a few mistakes and lost my rhythm a little bit. I got going towards the end, I was riding with factory guys and guys doing GP’s week in week out. Obviously after my crash at Foxhill it was quite nice to be able to come in and do that straight away. Like I said it was nice to go straight to the A final. We were all looking forward to today.

The overnight rain, you know it made it hard and frustrating, especially for myself in the first two races. In the first two races, lining against the 450’s in the heavy conditions, I was never going to get a start. Straight away I was getting filled in and the goggles were a nightmare so I had to throw them off. In the first race I think I ended up twenty-fifth. In the second race I went down and it took me it while to get going again so I ended up thirty-third in that.

As a team we finished up in fifteenth overall, you know we all hoped for a bit better but it’s hard when your not doing GP’s. If that was a typical race back home in the UK that race would have been cancelled. We don’t get to ride conditions like this anymore, the GP guys had France two weeks ago in pretty much the same conditions so it’s tough.

As always the team manager, Philip McCullough done a super job getting everything organised and making sure everything was sweet for us so hats off to him and thank you for that. Fair play to Graeme my team mate and Stuart Edmonds as well, he rode his heart out. We give it 100% when we are out there. Obviously we are all a little bit disappointed but we have to look at the bigger picture, we’re looking forward to next year and all being well we get picked again and we will see how it goes.

Gatedrop: As you said, you were battling with GP guys over the course of the weekend. Guys like Cervellin, Jacobi and Ostlund to name a few. It must have felt great running with them considering you’ve not got the same equipment!

Martin Barr: Yeah, definitely. As you said they’re on factory equipment and they’re running that pace week in, week out. You know if I didn’t have that crash (at Foxhills) things could have been a lot different but it is what it is, it’s motocross and these things happen.

As you said, to come in and battle with those boys is pretty good. It shows you what sort of category and ability we have, if we were doing GP’s week in week out, I’ve no doubt that all three of us would be doing much better. It is what it is, we will just keep working and have a strong winter to come out swinging again next year.

Gatedrop:  Could you sum up your British Championship for me? Are you happy with how it went or a bit disappointed not to win the title?

Martin Barr: Yeah, the first round hurt me. Then obviously the last round having two DNF’s but Ben (Watson) had already got the championship wrapped up at that stage. It was a little frustrating, the year before I finished fourth and I wanted to go and win it. But it’s not easy., Watson has been running well in the GP’s and stuff, he’s riding well but to finish second overall is still my best ever result in the British Championship. I was disappointed not to come away with the win but I am looking forward to next year already, hopefully we can get the job done.

Gatedrop: Just on next year, have you any plans or is it still up in the air?

Martin Barr: Yeah, I am all sorted but I can’t release anything until the end of the month but yeah I am all done and dusted.

Gatedrop: The British Arenacross is coming up at the start of next year, have you any plans to do it?

Martin Barr: No, unfortunately I’ll not be doing it. I love a bit of supercross and arenacross but the way it is, it’s so soon to our outdoor season and we’ve nowhere to prepare for it in terms of tracks. The guys doing it now are mostly French and Italian guys who’s supercross season starts in August time. By the time Arenacross gets going they’re fully prepared and they’ve been doing it week in week out. For us to go and do a one off event, although it’s nice the bigger picture is we could go there and get injured with no preparation so we have to look at that bigger picture unfortunately.

Gatedrop: It’s not yet official but it looks like Graeme Irwin will be racing MXGP next year, how do you think he will do and is it frustrating you haven’t got to ride any the last few years?

Martin Barr: Hats off to Graeme, he’s had a super year. British Champion and all the rest of it, I’m not too sure what his plans are but I’ve no doubt if he gets the opportunity to race Grand Prix’s that he has the talent, ability, work ethic to go and succeed so hats off to him.

As you said I’d love to be doing Grand Prix’s and going back at it but it’s just having a big enough sponsor behind you, making it available and happen for you but who knows where I’ll be next year. I’m looking forward to it.