Hampshire on his win at Budds Creek 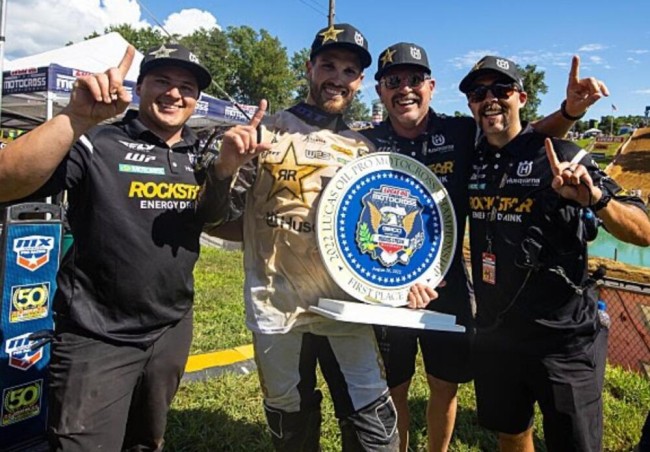 Rockstar Energy Husqvarna Factory Racing’s RJ Hampshire has secured his first 250MX victory of the season at the Budds Creek National, delivering an outstanding performance with 1-2 moto scores at the 10th round of the 2022 AMA Pro Motocross in Mechanicsville, Maryland. After battling through the ups and downs of a long outdoor season, Hampshire was more than determined to put his FC 250 into the center of the podium late in the year. He set himself up for success in Moto 1 with a second-place start, pressuring the race leader early on before making his move out front halfway through. With a big charge late in the race, Hampshire posted a dominant five-second victory at the end of 17 laps. He put himself into another good position off the start of Moto 2, working his way from fifth to second later in the race. He maintained a solid pace to finish runner-up in the moto, which was good enough to seal the overall win in the 250MX class.

“This is so special!” Hampshire said. “We were fast from the beginning and we just took a gamble there and stuck with this paddle tire all day and that really helped. We got two good starts, rode well and got our first overall this season. I’m stoked for myself and for this whole team, we’ve been through a lot already just this outdoor season, so I’m just stoked to be able to give the team our first overall of the season. Let’s keep this going, I’m not just settled in here, I want more!”

Jalek Swoll put forth a season-best performance at Budds Creek, despite having to come back from a pair of crashes in the first moto. After re-mounting back in 28th on the opening lap, Swoll climbed through the pack up to 13th before suffering another big crash that ultimately pushed him back to 23rd. He bounced back with a top-three start in Moto 2, battling between third and fourth for most of the race. He got passed by the defending champion with a few laps to go and he capped off the day on a positive note with a best finish of fifth in the moto.

“All-in-all, it was a good day for me,” Swoll said. “I got off to a good start around P3/4 and got tangled up with Justin Cooper early in the first one, so I came from pretty much dead last to around 13th. But I had no tear-offs and couldn’t see and ended up having a really big one on the straightaway. I re-grouped and got a good start in Moto 2, ran the pace for a while, but I was a little hurt at the end. I finished fifth – the best finish of the year for me – so I’m going to take the positives, try to heal up and better that score next week.”

It was the second race back from injury for 450MX teammates Malcolm Stewart and Dean Wilson, who each have their sights set on making progression with only four motos left in the series. Stewart scored a top-10 overall finish in the class, putting in consistent 12-10 moto scores throughout the day. “I think the day was good,”

Stewart said. “Overall, I got ninth, but I think that was a lot better start than it was for Unadilla. The whole team is working hard, so I’m just glad to get some gate drops – I think just getting that race-mode back in me is definitely helping a lot. Let’s just keep digging, we’ve got two rounds to go and we’re getting close to that top-10 so let’s just keep moving.”

Wilson also scored some points in both motos, finishing the day 15th overall with 18-11 results in the class. “It was a challenging day for me,” Wilson said. “Unfortunately, I got collected in a pileup off the start in the first moto and came from last to 18th. I didn’t ride great but it was good to come through the pack and learn different lines. In the second moto, I got a better start and made some pretty good passes at the beginning. Mookie and I had our own battle the whole moto – he got around me and I tried to get around him again but just couldn’t make it happen. It was good for me, just building my speed and fitness.”