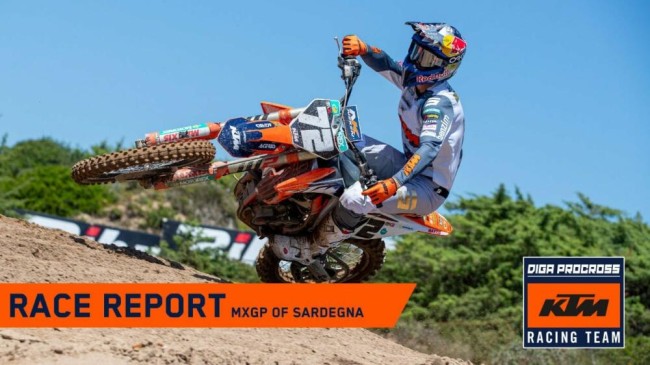 Liam Everts might not have got good starts at Riola Sardo but he had no issues making plenty of passes and ended up ninth overall in the MX2 class.

You can read the team’s, press release below:

Liam Everts, a proven sand specialist proved his upward form from recent weeks with two top 10 finishes and a well deserved ninth place overall at the MXGP of Sardinia.

· Liam Everts in the top 10 in both motos
· Deep, heavily rutted sand track and hot temperatures made for challenging conditions
· Next MXGP in Spain – intu Xanadú – Arroyomolinos

In the first race on Sunday, Liam Everts had a lot of work to do to get into the top 10 after a crash on the first lap. Lap after lap, the young Belgian improved and was able to overtake one competitor after the other. By the halfway point of the race, Liam Everts had already fought his way up to tenth place and finished the race in commanding style.
In the second race, Everts crashed on the first lap but, just like in the first race, quickly fought his way into the top 10. Thanks to his consistent lap times, Everts managed to overtake two opponents at the end of the race and finished in eighth place.

Liam Everts: “I had a very good feeling on the bike throughout the weekend, but luck was not 100% on my side this weekend due to crashes that were not my fault. Nevertheless, I am happy that I was able to fight my way into the top 10 in both races and achieve a single-digit overall result for the second weekend in a row.”