Talking point: MXGP of Sardegna – best GP of the year so far? The MXGP World Championship travelled to Sardinia at the weekend and it didn’t disappoint. What a weekend’s racing it was at a brutal and rough sand track. This is what Motocross is all about. Credit to the organizers too, there was a period in the past that they were doing too much track prep but it was nice to see them not touch the Riola track too much – just a few sections here or there but overall not too much and it presented the riders with possibly the toughest conditions of the year. Even Ben Townley seemed shocked at how brutal the conditions were!

Let’s start with the main story line from the weekend…

Who saw that performance from Calvin Vlaanderen coming into the weekend? Sure, a podium was on the cards as he went into the weekend with good form but to never have an MXGP podium to his name and to simply dominate the way he did was just unbelievable.

It’s Yamaha’s first MXGP overall win of the season and it’s came from the Gebben van Venrooy Yamaha team – not one of the full factory riders, who’d have predicted that coming into the season? The Gebben van Venrooy Yamaha team have put in so much work over the years as a private team but this year have decided to step up and managed to secure Star Yamaha engines which is clearly doing the trick. It’s nice to see the hard work paying off for both the team and rider.

Vlaanderen has been living in the Netherlands for around the last ten years making the move over from South Africa and it’s a day he’d have been dreaming about his whole career – it was nice to see him let the emotion out at the end. That’s something that makes sport and especially physically demanding sports, the very best to watch. 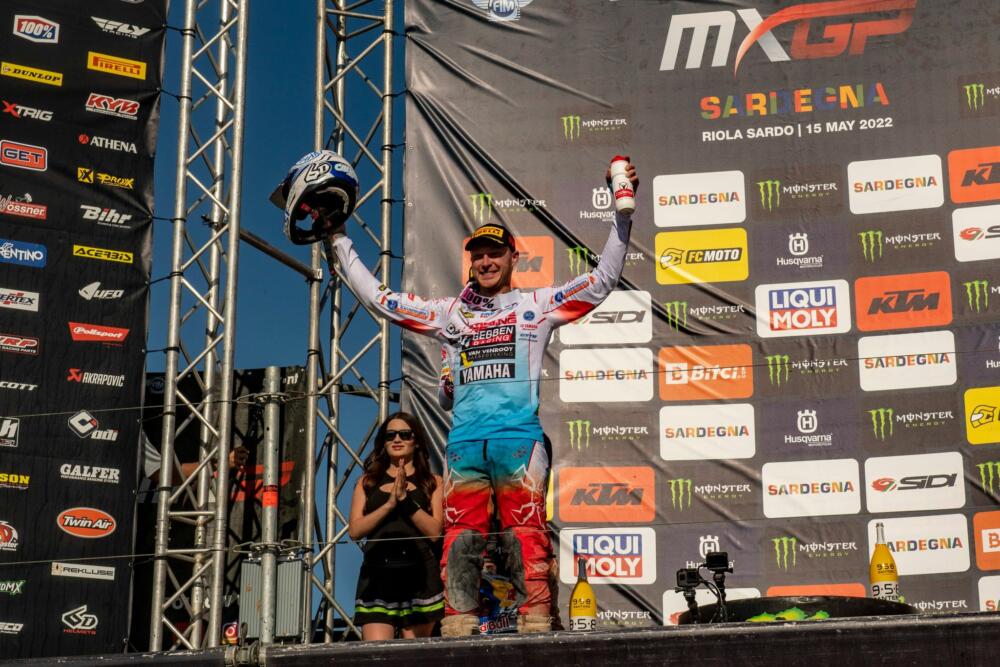 If we go back to the 2013 season when Shaun Simpson was racing at the MXGP of Benelux on a privateer JK Yamaha at a brutal Lierop, Vlaanderen’s victory was very reminiscent of that performance from the Scot nine years ago – both tracks were brutal and both Yamaha riders! Simpson managed to beat one of the best riders of all time, Antonio Cairoli that day and Vlaanderen managed to beat Tim Gajser in the best form of his career. You have to say though Vlaanderen’s victory was more emphatic than Simpson’s as he went 1-1 on the day and simply dominated the whole weekend. Quite crazy considering it was his first time on the MXGP podium!

These guys are unbelievable. Tom Vialle was born in the hard pack tracks in France and growing up wasn’t the best sand rider in the world. However, since moving to the Factory KTM team he’s been based in the Netherlands which sees him put in the Dutch sand laps as well as Lommel. The hard work is clearly paying off and that performance and GP win at Riola was one of the best GP wins of his career.

What makes Vialle’s win more impressive is that this year he hasn’t looked quite as comfortable but he rode with a lot more intensity at the brutal Riola and the bike setup for arguably the first time this season looked on point – the back end visibly wasn’t dancing around on him as much as the other GP’s despite the track being much bumpier so it looks like they’ve made big steps on the bike. 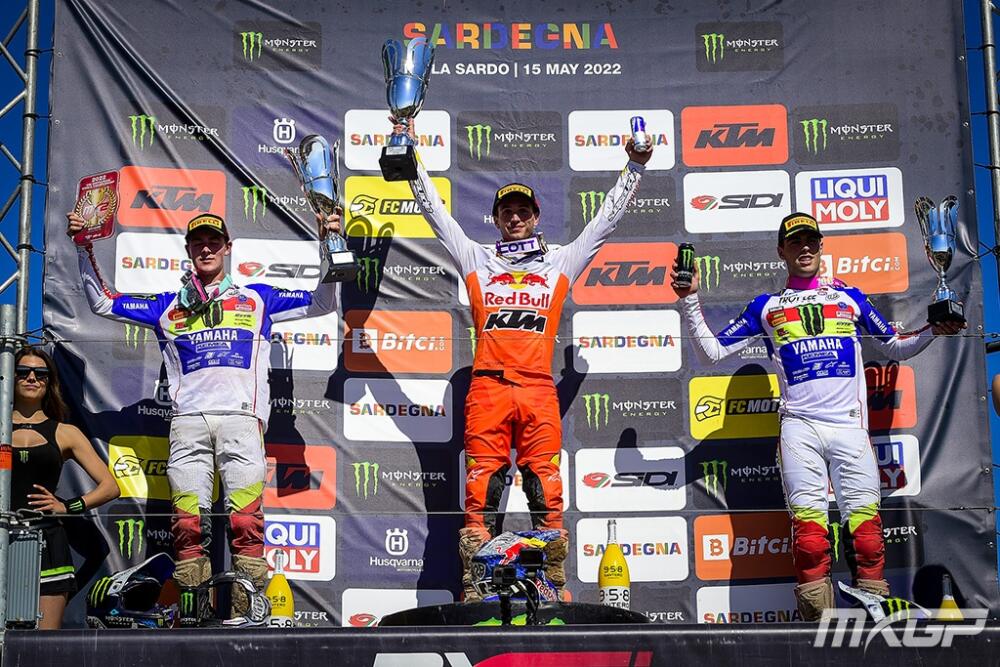 Another factor that made Vialle’s GP win so impressive is because Geerts is born in the sand and he didn’t exactly have a bad day… he was on it! Vialle just raised his level and it’s tougher to go much faster than either of them on a 250cc in those conditions (Herlings aside). The speed and level they rode at was intense and in all honestly they wouldn’t have been far off an MXGP podium on their 250cc’s at the weekend. Just have a look at the lap times below which shows just how fast Vialle and Geerts were riding.

With only six points splitting the pair MX2 after eight rounds, it is very exciting this year and hopefully both can stay fit. With Vialle’s determination he is a tough nut to crack and with Geerts out right speed it could go right down to the wire – here’s hoping!

Before the fourth round of the EMX250 series, it’s been the Cornelius Toendel and Rick Elzinga show but the deep sand through up some different results and riders at the front. Andrea Bonacorsi didn’t have a good start to the season after crashing out of Matterley Basin which was his MX2 GP debut… but he’s on the way back up and took a superb victory – he first EMX250 overall which he’ll be hoping there’s many more to come.

Lucas Coenen also showed potential race winning speed as he keeps improving on the 250cc after stepping up from the 125cc last year. Another rider that ran right at the front was Dave Kooiker which was nice to see as he’s highly rated but the last few years have been difficult for him but fourth overall is a step in the right direction. Making his EMX250 debut, Cas Valk also impressed finishing seventh overall, he’s another rider who could have a bright future ahead of him. 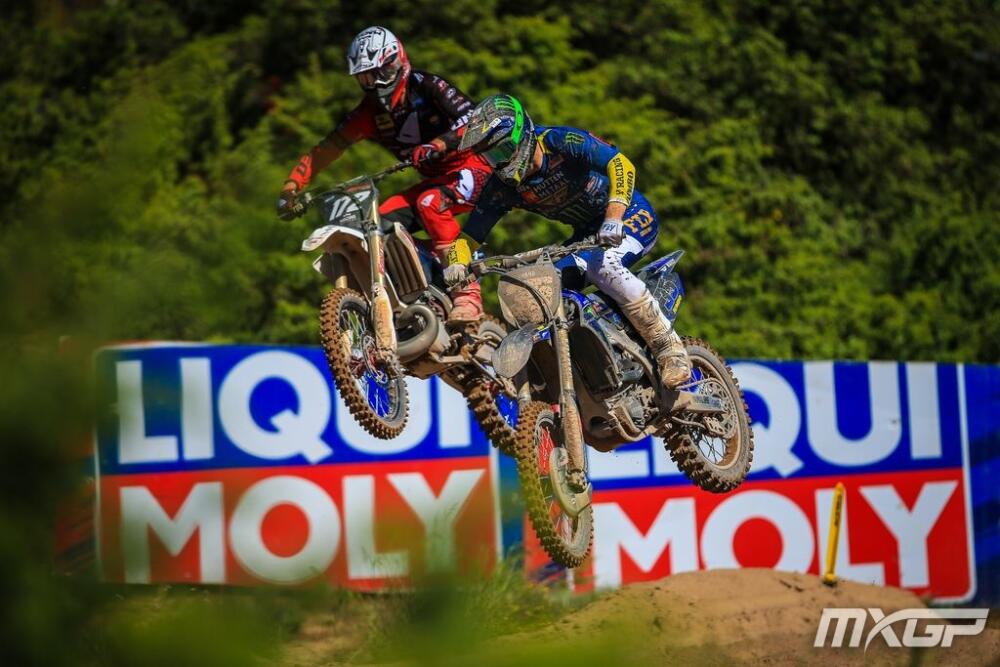 Riola Sardo was just superb – big bumps, massive holes and a lot of ruts, it was brutal with no hiding place out there. With no more Lierop on the schedule hopefully Riola which hosted it’s first MXGP event last year is here to stay alongside Lommel as they’re by far the toughest tracks on the calendar.

Wouldn’t it be nice to see more deep sand tracks on the calendar? They’re hard to find but it’s fantastic to watch the best Motocross riders in the world sand surf and play with the big bumps.