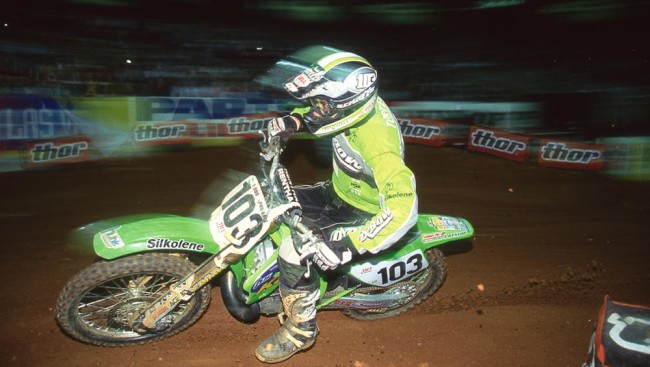 The last time an AMA supercross series didn’t start in Anaheim was back in 1998 and it was a shock winner with Sébastien Tortelli, still a GP rider at the time, stunning America to win the biggest supercross of the year. It was that much of a shock that a confused Art Eckman and David Bailey had to re-record the race after they thought Tortelli was a backmarker!

Jeremy McGrath made his AMA supercross debut on the Yamaha in LA after a tough year in Suzuki in 97 and he was determined to get the title back off reigning champ, Jeff Emig, while Ezra Lusk was a big money signing by Honda.

It turned out to be the best year of Tortelli’s career after the still teenager clinched the 1998 250 world championship in a cliffhanger of a final round after a year-long duel with Stefan Everts in Greece later in the year.

Amazingly, it is now 22 years since Anaheim has not held the opening round of the supercross series and France, once again, have a shot at winning the non-Anaheim opener over two decades later with Marvin Musquin and Dylan Ferrandis lining up in the premier class this Saturday night in Houston.

And the last time the series didn’t start in California was two years further back in 1996 when Jeremy McGrath was king, rode a Honda and the series started in Orlando, Florida!

See the action that included Mike Larocco’s ill-fated switch to Suzuki, a silky smooth Damon Huffman, felt by many to be the next big thing, was fresh off two 125 supercross titles with Suzuki, was scooped up by factory Kawasaki for the 250s, an aggressive Ryan Hughes was also up from 125s and onto the factory Kawasaki team alongside new signing Jeff Emig, who moved from the 250 Yamaha team – and all were all hoping this was the year they could take down McGrath! See the opening race below: