Vialle on a costly DNF 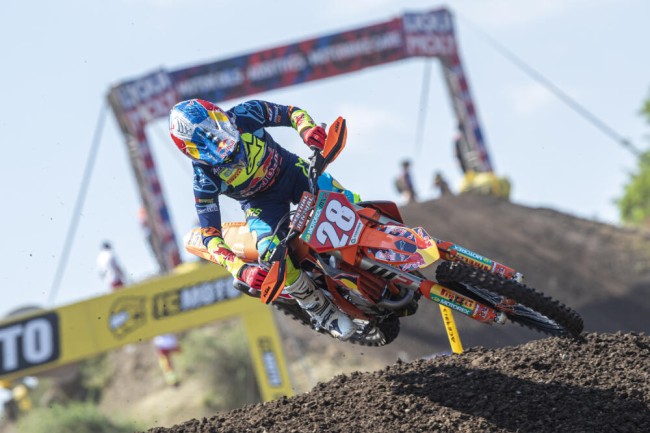 Madrid, Ernee and now Teutschenthal: MXGP ploughed onwards with the third Grand Prix in as many weeks and the old-school, narrow and undulating Talkessel layout was the usual host of the German stop in the series. The tough, rutty, bumpy and curiously dusty course required strong line choices and a good feeling for optimum grip. After riding to P1 on Saturday for Pole Position, Vialle, who has led laps in every single Grand Prix bar one this season, sliced to the front from the first circulations of the opening moto and set the pace, deterring the attention of principal rival Jago Geerts by a slender margin at the checkered flag. In the second race he grabbed a second holeshot of the day and was set for another rostrum appearance until a minor technical hitch ended his race at the midway stage.

Vialle took hold of the series red plate three races ago in Spain but events in Germany means he stares at a 8-point gap to Geerts. DIGA Procross KTM racer Liam Everts was not able to compete on Sunday after a crash in the qualification heat on Saturday left the Belgian rookies with an injured finger. After journeys to Spain, France and Germany, MXGP closes three weeks of action and now enjoys a small respite before the long trip to Samota-Sumbawa for the Grand Prix of Indonesia on June 26th and the second non-European date on the 2022 schedule.

Tom Vialle, 1st and DNF for 9th overall in MX2: “I really like the track in Germany and had a good connection right away that allowed me to win the qualifying race and then have the holeshot and control the first moto. I holeshotted the second race – my starts were really strong this weekend – and [Thibault] Benistant passed me on the first lap and I was quite settled in 2nd. Unfortunately, we had a small issue and could not finish. It cost us a few points but we’re doing really well and I know we’ll be able to answer and fight back very soon.”