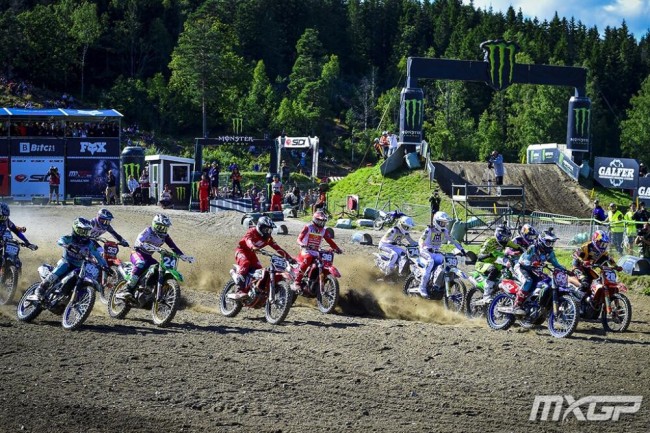 Jeremy Seewer took the Swedish MXGP victory with two strong rides including a second moto win that saw him holf off Tim Gajser and Romain Febvre all race long. Maxime Renaux took a brilliant race one win with Seewer on his tail all moto but his hopes of a GP win ended with a first lap crash and getting ridden over by Ben Watson forcing a DNF with the pain.

Tim Gajser rode smooth and smart all day for second overall with a 4-2 and, with a 115 point lead, could wrap the world title up next weekend in Finland. Glenn Coldenhoff made it two Yamaha’s on the podiuim completing a Yamaha 1-2-3 in moto one with third then came from a less than ideal start to fifth in race two.

Qualifying race winner, Mitch Evans, rescued a sixth overall after going down in race one and coming back to tenth then getting away with the leaders and running the pace of the front three before hanging onto fourth as Coldenhoff and Prado caught him in the last five minutes. Only ten seconds seperated the top six at the end of the final moto!

It was the Vialle and Geerts show in MX2 as the title duo went at it in both motos but a mistake apiece left Geerts with the overall win and the pair tied on points at the end of the day allowing Geerts to go to Finland with a 23 point lead with three rounds and six motos to go.

Vialle worked his way into the lead in race one but Geerts was following and trying to put the pressure on when he dropped it and was forced to concede, with 8 seconds just too much to make up. In race two Geerts was chasing Vialle again but a slip from Vialle gave Geerts the advantage and once they passed a fast Simson Laegenfelder, it was Geerts who set a hot pace that only Vialle could match.

From there an intense battle ensued with both riders knowing this moto win could be huge for the world title chase. If Vialle won it would be a six point swing but try as he might, and boy did he try, Jago Geerts refused to make a mistake even with Vialle going all in on the final two laps with the Belgian not only showing tremoundous speed but also impressive compusure. Geerts took the moto win and now hits the sand of Finland next weekend as the favourite for the MX2 world title with a 23 point lead and three rounds remaining.

Simaon Laegenfelder recovered well from heat exhaustion just two weeks ago at Lommel to take third on the podium over a fast Kevin Horgmo and Mikkel Haarup with both Scandanavian’s impressing on what is almost their home GP.