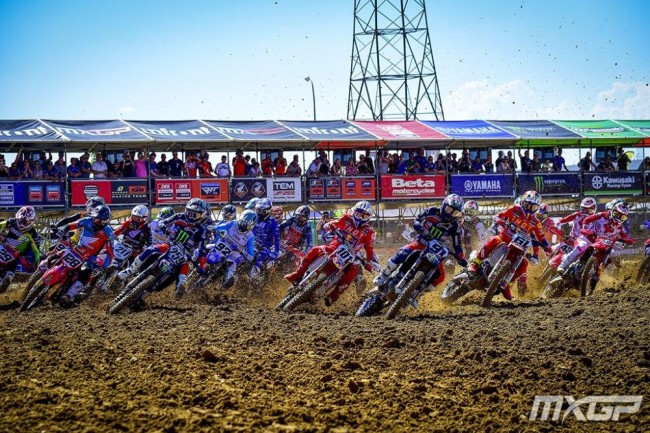 Maxime Renaux had the perfect day going 1-1 on a rutted and technial circuit in Spain to take the MXGP win and show that he is the guy ready to take advantage of anything going wrong for Tim Gajser.

Renaux passed Prado to take the lead in race one and held off Gajser for the win with Prado third. In race two Prado was edging away from Renaux when he lost traction landing off a jump and went down in the ruts giving Renaux a free run to the flag with the win.

Coldenhoff took second in race two for second overall and a 1-2 for Yamaha as Brian Bogers was superb all day going 4-3 for third overall and his second podium of the season.

A still slightly off tune Tim Gajser did some good damage limitation as he recovers from illness going 2-6 but he knows Renaux has the momentum heading into his home GP as Mattia Guadagnini had a great race taking sixth overall as he shows he’s a fast learner on a 450!

A crash while leading in each moto cost Jago Geerts the MX2 world championship lead as Tom Vialle took advantage of the mistakes to win both motos and take the red plate.

“Today was just perfect. I feel really great with the bike,” enthused a delighted Vialle.

Geerts first crash was scary after losing grip on the ridiculously over-watered take-off on a double and going down hard. Fortunately, although sore, Geerts got back on the bike and came from last to ninth.

Race two and it was looking like another Vialle/Geerts duel until Geerts slipped out on a berm and gave the lead away, consequently having to settle for second in the moto but still took third overall on the podium. Vialle now leads the series by ten points heading into France next weekend.

Simon Laengenfelder had a very strong day going 2-3 for second overall with Liam Everts coming from a bad start to sixth in race one then holeshotting race two and riding really well for fourth. Everts is learning the MX2 pace fast.