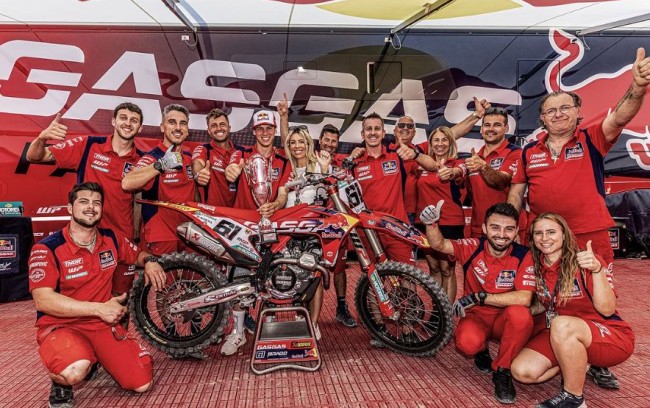 Tackling the Grand Prix of Sardegna with the complete team in action, Red Bull GASGAS Factory Racing had an exciting day in the energy-sapping sand of Riola Sardo. Mattia Guadagnini made his premier-class debut aboard his powerful MC 450F machine, Jorge Prado returned from injury and Simon Langenfelder showed more of that eye-catching speed in the MX2 division. It was a jam-packed weekend for the squad!

Just over two weeks on from the crash that left him with a dislocated shoulder, Jorge Prado picked up right where he left off and put his MC 450F onto the box! Shadowing the championship leader for much of moto one, he ran the pace comfortably before settling for third and turning attention to moto two. Prado got on the gas to take yet another holeshot in that moto and eventually hit the finish in third place for a second time. That very consistent 3-3 scorecard put him second in the overall classification and helped him edge closer to the top three in the championship standings.

Jorge Prado: “It is so good to be racing on my MC 450F. I took it a little easy on Saturday, but I saw that I was riding quite well and that really motivated me. Finishing second overall is a great way to return to the MXGP class! I am going to keep working now and go for it in the upcoming rounds. The championship is still alive.”

Racing in the premier class for the first time, after limited preparation on the bigger bike, Mattia Guadagnini showed his true potential with competitive practice times and solid 11-8 moto scores. ‘101’ was composed whilst racing towards the front in the second moto and recorded lap times that were on par with the riders inside of the top five. Eighth overall was where he was eventually classified in his first Grand Prix on the MC 450F.

Simon Langenfelder continued his run of good form in the MX2 class, despite such taxing conditions, as he showed a lot of pace aboard his MC 250F. Sitting in fourth for a majority of the first stint, he eventually hit the checkered flag in sixth with the fourth-fastest lap of the race! Although a crash on lap one of moto two ruined any shot that he had of finishing on the podium, his sprint through the field to eighth place was one of the standout moments from the event. 6-8 scores put ‘516’ in eighth in the overall classification.

Mattia Guadagnini: “It was a tough debut, but I enjoyed it a lot! I think that making the change was the right thing to do for me, so thanks to the team. I am already feeling really, really good on my MC 450F. This is definitely a great bike for me. I feel like I could have been even higher up than eighth in that second moto, but I did not want to task risks. I could not ask for a better debut. I’m feeling so positive!”

Simon Langenfelder: “This has definitely been the hardest round of the season! I had bad luck in that second race, crashing in the third turn, but came from last to eighth so fast. I was riding very good for myself. I started losing my rhythm towards the end, so I just rode to the checkered flag and kept trying my best. It was not quite enough today.”

The Red Bull GASGAS Factory Racing squad approach one of the most exhilarating rounds of the term now. Thousands of fans are eagerly waiting for the Grand Prix of Spain, run on May 29, to burst into life in order to catch a glimpse of Jorge Prado in action on his MC 450F.