Vlaanderen on his stunning win 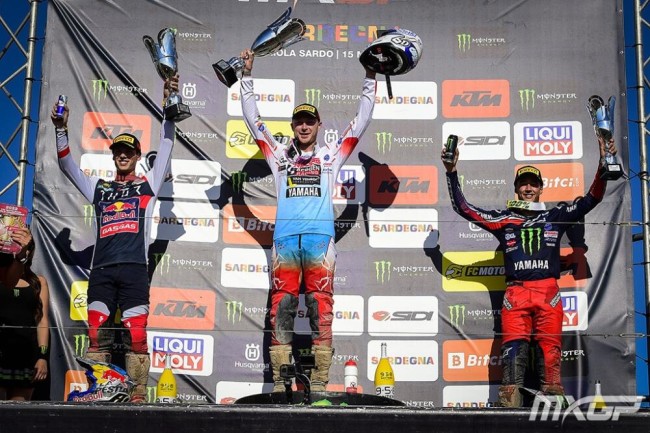 Calvin Vlaanderen spoke to the press after the weekend of his life that saw him win all three motos across the weekend to take his first MXGP win in style! And he did it without a factory machine with Gebben Van Venrooy Yamaha earning a win that will mean just as much to them as Calvin.

After all the sacrifice and injuries, Calvin Vlaanderen has achieved his dream in the best way he could ever imagine, saying: “I’m speechless. Just honestly, it was a perfect weekend. I was first in every single session that mattered. First in time practice, first in the qualifying race and then both races. It’s just… I don’t know what to say, just years and years of hard work, this is what I dreamed of coming into MXGP.

“You know, winning and to be here right now. It’s like a dream. I just wish my family was here and everyone from back home.

“I think it all started with the week leading up to this, like mentally it’s such a big thing in the sport, especially at this level to believe you can win. And coming to this weekend, I honestly believed for the first time in my career, I can win it. And it’s such a nice feeling, just confidence and it showed today that I could do it”.

And there could be a lot more to come now he has the first win under his belt – and a race for his signature on a factory team for 2023?

Jorge Prado also had a great weekend, taking second overall despite dislocating his shoulder three weeks ago and said: “It was great to get back to racing. Obviously, after the shoulder injury and three weeks off the bike. Sardegna is not the easiest track and I didn’t even know if I could ride. So, Saturday I took it easy, and I saw that I could manage to ride and ride quite well.

“I was quite motivated to get back on track and just take some points and see where we’re at. And here I am going on the podium, second overall. It’s a great way to come back to MXGP. It’s a pity about this shoulder injury, but if I could do this, like this, I think many great things will come in the future. So, I will keep working and I will go for it”.

Glenn Coldenhoff commented on his strobg podium despite a difficult first moto, saying: “In the first race I didn’t start so well, somebody crashed in front of me in the second turn and I had to go all the way to the back. Actually going into this weekend I was sick, also in Maggiora already and we tried everything with the team to get healthy again but it looked like it was stuck with me. In the second race, I got a little better start. Then I made a mistake, but I saw Calvin pushing hard in the beginning, so I felt like I wanted to go with him.

“Congrats to Calvin, he was riding really good. I couldn’t follow but still I had a good feeling. Even after that second race I wanted to go straight to the track again because I didn’t expect the podium, but it’s good to be here. And again, it’s been a tough road. That I know I can do it, but it was just a bit difficult. But here we are again”.