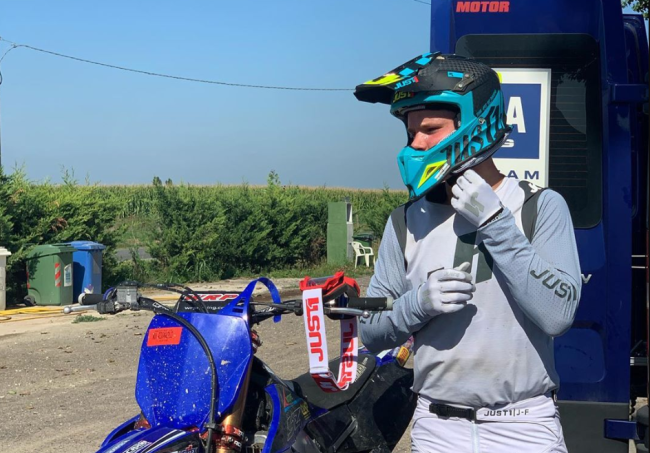 There’s no doubt that Norwegian, Håkon Fredriksen has a lot of talent and after signing a deal with the SM-Action Yamaha team to contest the EMX250 championship this really is his time to shine. Fredriksen has pretty much been a privateer in the GP paddock which makes things difficult and considering how much of a big build he is, starts have been an issue.

After signing with the SM-Action Yamaha team, Fredriksen will be hoping to grab this opportunity with both hands and if he can get good starts there’s no reason why he can’t be a front runner in the class.

We caught up with Fredriksen after it was announced he secured a ride for the rest of the season.

Gatedrop: It’s recently been announced that you’ve signed with the SM-Action Yamaha team. How did the deal all come about?

Fredriksen: I saw Adamo was injured, so I sent them a message. Like, I have nothing to lose so why not? From there we came to an agreement that I should come to Italy and do a test. The test came out positive, and now I have a ride for the rest of the season.

Gatedrop: You’ve pretty much been a privateer in the GP paddock so far, how does it feel to finally secure a good ride?

Fredriksen: It feels really good, I think this can be like a confident boost for me. The team and I have already got a good vibe.

Gatedrop: I believe you’ve done some tests with the team, how’s that went and how’s the bike?

Fredriksen: Yeah, like I said the test was positive. The bikes are so good and really how I want them to be!

Gatedrop: There was no mention of how long you’ll be with the team in the press release, but is it likely to be for the rest of the season?

Fredriksen: Yes, it is for the rest of the season.

Gatedrop: What’s your goals for the EMX250 championship once we get back to racing?

Fredriksen: My goal is to be a top runner and show that I earned the spot at the team.

Gatedrop: You didn’t race the opening round of the EMX250 series at Valkenswaard, why was that? Were you injured?

Fredriksen: I had an injury at the end of the SX season and it held me back a little. So the plan was to do 5 GP’s in the MXGP class later in the season.

Gatedrop: You’ve raced some Norwegian championships, how has the start of the season gone for you?

Fredriksen: Yeah, we had one Norwegian championship in speedcross and it turned out good for me, I ended up as the champion!

Gatedrop: You are a big guy and rode amazing on the 450cc at the MXoN, did you think about stepping up to the bigger bike?

Fredriksen: (laughs) yes, thanks! That was the plan until I got in contact with the SM-Action Yamaha team.

Gatedrop: What’s your thoughts on the GP calendar and having three rounds at Lommel/Latvia in a week?

Fredriksen: I think it’s going to be good. Its less travelling and more focus on the races. I think its going to be interesting to see how they change the tracks for each race!

Fredriksen: I am really grateful for the opportunity and really looking forward to racing again!