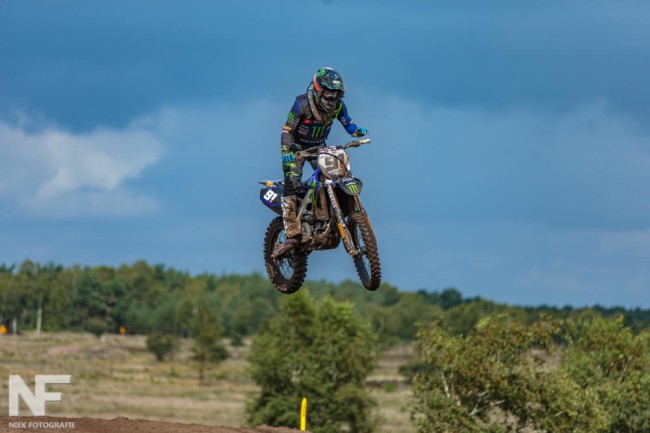 Factory Yamaha rider, Jeremy Seewer is getting back into the race routine after racing the Italian Championship at Faenza as well as the Dutch International race at Arnhem. At both races the talented Swiss rider had the speed to win so will be heading into Latvia feeling comfortable on the bike.

At the opening two rounds of the MXGP World Championship, Seewer had two very different rounds – at Matterley Basin he just missed the podium going fourth overall but didn’t have the best of days in Valkenswaard and a DNF in the second moto cost him points. There’s no doubt he’ll want to improve on the ninth he currently sits in the MXGP standings but will look to jump up the leader board on the return to racing.

Dutch journalist, Tim Gerth from Motorsport.com caught up with Seewer after the Arnhem International race and was kind enough to send us over the interview.

Gerth: How do you feel getting back on track today?

Seewer: Pretty good. It’s been a while, I mean I raced Faenza last weekend but still to get some racing going, especially in the sand because we are going to race in the sand a lot. It feels good to be back behind the gate and to line up with the others. The competition was good and there were many fast riders today.

Gerth: It’s a lot different than practice, how did today go for you?

Seewer: I mean it is different than practice but somehow it still feels a bit like it with no one here. It’s just us doing a moto but we are going to have to get used to it. There’s plenty of mask stories (laughs) but it’s just the new normal. I mean I felt good all day on the bike but I missed both starts because normally at the GP’s they drop it between 5 and 7 seconds and today for our moto’s the gate dropped after like 3 seconds. I wasn’t ready, I was still just starting to focus in my mind and then I had to go already so I missed both starts. I knew in the second one that it was going to be quick so I was quick but still I missed it because it was even quicker.

Gerth: It’s not like you are going to change your routine after one start, right?

Seewer: No, true but lucky at the GP’s they won’t drop it like that so my starts will be fine. For the rest I was super fast during the moto’s, I had a small mistake in the first one trying to pass because I came back from the bad start at the beginning but everyone was going quite fast.

Gerth: It looked like a hard track to pass on as well?

Seewer: Yeah, it was really tough to pass and you get all the roost so you need to stay behind a bit. After a small crash I could finally pass everybody and I finished third which was fine because I had really good lap times. In the second moto, I had a better start a bit but still sh*t and then I followed everybody.

Gerth: At one point you were the fastest guy on the track!

Seewer: Yeah, actually I tried to pass AJ back because I felt like I was faster but I hit a breaking bump which I hit three laps the same before which was fine but this lap it just kicked me sideways. It wasn’t anything big so I saved that one but the bike went to the other side and stopped. It just made a nice roll and everything was fine but the bike was destroyed but even after that I did some of the fastest laps, a second faster than everybody. Maybe they lost a bit if they were fighting but not the first guy, you know. I had good speed but then I just decided to stop because the bike was starting to smoke and I didn’t want to take risk. I missed around five laps but I mean that doesn’t matter – I know were I am and I’m in good shape.