Interview: David Braceras discusses his recent injury and his future 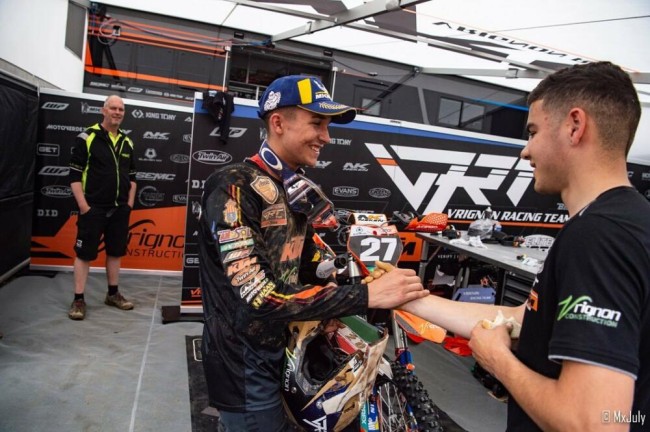 David, finally you couldn’t be behind the gate in Lommel, a shame as it is certainly a good track for you. Tell us what happened and when you made the decision.

Braceras: Exactly, it wasn’t easy to make the decision as I really wanted to race in Lommel, but I had no choice… I had problems with the tendon in my right wrist for more than a month. It all started with a little discomfort that got worse and worse, to the point that I couldn’t even hold on to the handlebars. I went down to Spain to have tests done, and Dr. Marta Guillén together with Miguel Quirós from Físio Reydes saw instantly that the only solution to the problem was surgery. The operation wasn’t very complex, so with a good rehab job we knew we could be on the bike soon, so I didn’t think about it for a second. I had to sacrifice Lommel to try to finish the championship and what may come in the best possible way.

How has the operation gone and what deadlines do you set now to get on the bike?

Braceras: The operation went very well. What worried us most was how long it would take for the scar to close, luckily everything went great and very quickly. I’m going to try to get on the bike this Saturday, five days earlier than initially planned, I still have some post-operation discomfort but surely, it would <not prevent me from riding a motorcycle. Now it’s time to listen to the specialists, go step by step, with patience and continue as we left it, which was a good level.

Sweden, Finland and France, you are 8th overall in the EMX250 championship with one less race, what goals do you have in the short and medium term?

Braceras: Yes, Lommel has hurt me a lot in terms of the championship position since I have lost very good points. If my objective for this summer was to fight for victories, now everything has been affected a bit, I know that Sweden is going to be complicated, I will get on the bike twice at the most three times before, and although the speed is there, I will have to grit my teeth , because the stages can be long, I know that I will not reach 100%, so we will propose an intelligent race to be able to add as many points as possible. Already in Finland I will try to finish on the podium and in France I will fight for the victory, everything will depend a little on how the hand responds. As for the championship, I would like to finish first among those who have missed a race and as high up as possible, we can fight for the top 5. I know it’s not easy, but it’s not impossible either. I will give everything, as always, to finish as high as possible in the general classification.

Now let’s talk a bit about the future, will you continue next year on the same team? European, GP’s? What is your priority?

Braceras: I’ll start at the end, my priority for next year is very clear to me, I want to try to win the European EMX250 title and do as many World Championship rounds as I can and they don’t collide. As for whether I will continue with my VRT team, I have a contract with them until the end of the season, I know they are committed to my continuity but sometimes it does not depend on them alone, the factories move chips within the teams, and we must wait. What I can tell you is that I have several possibilities for next year and from what my manager Iker tells me, if there is no setback, I will be
in a team prepared to fight for the title. But for the moment I’m here, and I want to close this season with success.

To finish David, we have to ask you this (laughs), you are the current champion of Spain in the Mx2 category, within the top 10 of the European, you have debuted in the World Championship this year in Spain, podium also in the European, do you think that you would be prepared to defend Spain on the International stage?

Braceras: (laughs) my team leader told me before the summer that I would ride the best bike possible, as always, if that happened, that we would go all out! I am clear that my team would be 100% involved. I am less impulsive, (laughs) It would be a dream for me to be in the internationals, defending the colours of Spain and competing against my idols… and if this were not enough to do it in the USA… just thinking about it gives me goosebumps. There are skilled mechanics, and they are good at it. As for whether I would be prepared, I can tell you that there are two months to go until September and I am sure that I will be there 100% but they do not give it to you like this because yes, I know that You have to do well in these last races to proof that you are in good shape and have arguments that you are ready to go to that race, which is the most important of the year. In the nations you must be regular, a bad result in a stage condemns the team, I have a lot of experience in this competition format, the Copa del Avenir, Regions of Spain… I have been individual and collective champion with my teammates, in both at some point, I am not comparing the level, much less, only that it is a format that I have always liked and that I have experience, everything adds up. In the internationals, regularity is highly prized, during that weekend you must drive as a team above all else, it is something that you must understand well. That is why I want to end the year in the best possible way. I also want to say that just being in the options of a possible candidate makes me very happy, it means that I am doing things well. If I go it will be a dream come true where I will work hard, if I don’t go, I will know that I am getting closer to going, and I will be cheering from home like crazy, yes, I will not give up and I would try again next year.

Thank you David for your words, good luck in the rest of the season and future