Geerts on a BIG win in Sweden 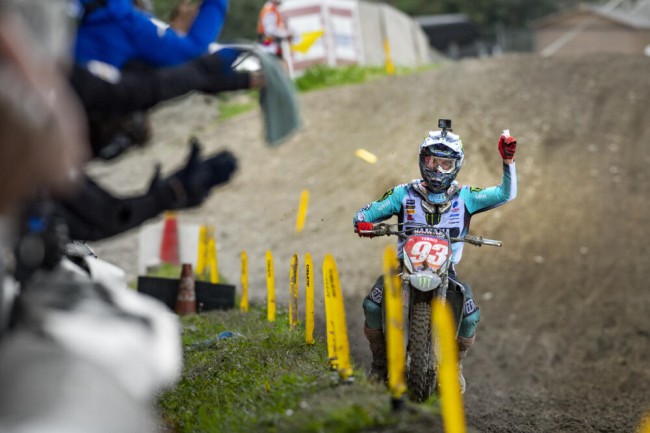 Monster Energy Yamaha Factory MX2 rider Jago Geerts celebrated his third Grand Prix win in a row in Uddevalla, Sweden. With three GP’s to go, the Belgian is still leading the championship by 23 points. Thibault Benistant, who is struggling with his shoulder, finished 7th.

The FIM World Championship returned to Sweden after a two year hiatus, due to the pandemic. The Glimminge Motorstadion in Uddevalla is a familiar venue for most of the riders. Jago Geerts felt well on the hard-packed and stony track and claimed pole position after an impressive start to finish win in the qualifying race on Saturday. Thibault Benistant on the other hand had a difficult day, finishing only ninth.
In race 1 Geerts was fourth into the first corner, two positions ahead of teammate Benistant. While the Frenchman dropped back to P10 in the first lap, Geerts did advance. First, he passed Längenfelder for third place. One lap later, the Belgian went by Horgmo and settled into Vialle’s rear wheel. However, it didn’t come to a battle between the two title contenders: Jago lost a spot after a small crash on lap 5. He quickly regained second place after a nice pass on Horgmo, but the gap on Vialle was too big. So, Geerts settled for second.
Although it was not that easy to pass, Benistant still managed to move up a few positions. The Frenchman crossed the line in sixth place.

A cool head
Benistant got off to a good start in race 2. The French rider was right behind Längenfelder and Horgmo in the first turn and quickly passed the Norvergian for second place. Geerts had some more work to do. The Belgian was only sixth after the first lap, but quickly moved up to fourth place, right behind Vialle. Benistant crashed and dropped from P2 to P9. Vialle also made a mistake, which allowed Geerts to take second place. The championship leader immediately went for Längenfelder. Just like that, he closed the gap. But passing the German turned out to be much more difficult. Jago launched one attack after another, but Längefelder refused to go down without a fight. On lap 11 Geerts finally made the pass and was immediately followed by Vialle. The French rider stuck to him, but Jago remained cool as a cucumber and grabbed – for the first time in his career – his third GP win in a row, after Loket and Lommel. Benistant had to handle the pain in his shoulder after his crash and finished ninth.

With three GP’s to go, Geerts is leading the championship by 23 points. Benistant remains fifth.

“This victory really tastes sweet. Especially after my mistake in the first race. I was mad at myself and really wanted to set things straight in race 2. I eventually succeeded. Although I had to work hard to get past Längenfelder. When I had finally passed him, Vialle urged again. I had to fight until the end. In couldn’t extend my championship lead, but Vialle also didn’t get closer. Fine. I’m especially looking forward to next week’s GP in Finland. I have good memories of Hyvinkaa. In 2014 I became European champion 85cc on that track. A sand circuit. It suits me really well.”

“A bad weekend. In the beginning of the weekend I struggled with the suspension. Tha problem was quickley solved. But I also suffer from shoulder pain. Especially on hard landings. In the first moto the pain was still okay. Despite a small mistake in the first lap, my riding was pretty good. In the second moto I stretched my shoulder a bit after a crash in lap 3. I had to handle the pain, I had to be careful. I couldn’g go flat out. That’s frustrating.”