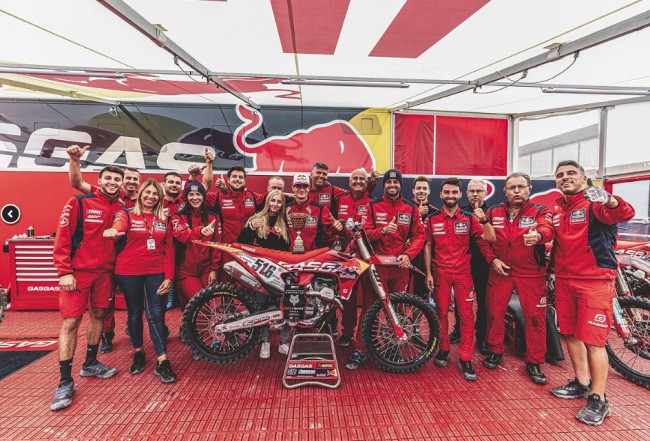 Red Bull GASGAS Factory Racing just completed a successful race at the Grand Prix of Sweden, the fifteenth round of the 2022 FIM Motocross World Championship, as Simon Langenfelder returned to the podium in the MX2 class. Charging to 4-3 scores aboard his MC 250F, he claimed third overall and yet another trophy.

Langenfelder continued to get on the gas in what has been a breakthrough year aboard his MC 250F. ‘516’ was very impressive in the first MX2 moto on Swedish soil, as he lurked in fourth for much of the race and remained in striking distance of the leaders. Claiming fourth in the first moto set him up to make a bid for a spot on the podium when the second moto burst into life! The way that he rode in that final race was phenomenal; he ripped the holeshot and led for ten laps, before taking third in the moto and the same ranking in the overall classification.

Simon Langenfelder: “I’m back on the box, which I’m happy about. I got a good start in the first race but was sleeping a little bit, so went back to fourth and then I was stuck there. Going into the second race, I took the holeshot on my MC 250F and just tried to do well. In the first twenty minutes, I rode really well. I made some mistakes after that and lost some ground. All in all, it was a good weekend. I’m looking forward to the next three rounds.”

Starting the first moto on the cusp of the top ten, Jorge Prado got to work in the early stages of the opening moto and charged into fifth on lap six. Although he was posting some of the quickest lap times of the race, the gap to the riders ahead was too large to overcome and he was forced to settle for fifth place at the finish. Another mediocre start meant that moto two was no easier for Prado, who secured sixth in the latter stages and fifth in the overall classification. Once again, he was the fastest rider on track at the end of the race.

Mattia Guadagnini was ranked in twelfth in the first moto, after a so-so start, and continued his rookie year aboard the MC 450F in fine form. A crash early on in moto two left him facing a big challenge, yet he persevered and charged hard in an attempt to salvage some points. Guadagnini came up just a little short in twenty-first and was eventually ranked in eighteenth overall, thanks to the points that he got in moto one.

Jorge Prado: “Actually, it has been a good weekend. I was happy with my riding and I felt much better, so I am sad that the result does not show how good I was. I was competitive this weekend and could have won with a good start. I had some bad starts, which was unusual, and had to make a lot of passes at the start of each moto. I am happy with my riding and the progress that we have made as a team. I had fun!”