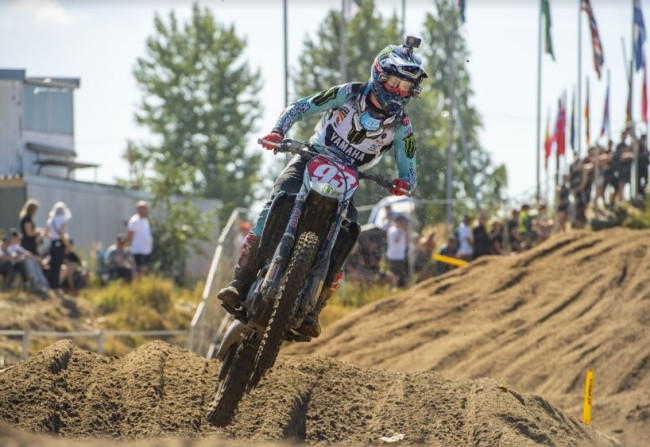 After an absence of eight years, the FIM World Championship returned to Hyvinkaa, Finland this weekend. A sandy track Jago Geerts has fond memories of. Back in 2014, the Belgian was crowned European champion 85cc on this circuit. Geerts immediately had a good feeling on Saturday. He was fastest in time practice and was unstoppable in the qualifying race. Geerts grabbed his 7th pole position of the season, teammate Benistant was fifth.
Not a lot of excitement in race 1. Geerts grabbed the hole shot, closely followed by Vialle, De Wolf and Van de Moosdijk. The Belgian made a small mistake on the waves in the first lap, which allowed Vialle to take the lead. But not for long. Two turns later, Geerts hit back. He took the lead again and was in full control until the end. Despite a nagging pain in the shoulder, Benistant managed to finish fifth after a poor start (11th).

Drama
A lot more drama in race 2. Again, Geerts got a great start – another hole shot – on his YZ250FM. But at the end of the first lap things went wrong. Jago went over a berm and was thrown over the handlebars. The Belgian got stuck under his Yamaha and lost a lot of time to get back on his bike. The championship leader had to fight back from 19th position. In lap 8 Geerts was already riding in 8th place. But luck was not on his side in that second race.
When Jago wanted to pass Haarup, the Dane made a mistake. They collided and went down together. Another blow. In the end, Geerts had to settle for seventh place. Just in front of Benistant, who pushed through the pain again.
Geerts finished third overall, his 14th (!) podium of the season. Benistant was 7th overall. The French rider remains 5th in the championship. Geerts is still leading the championship. With two Grand Prix to go, the Belgian is 15 points ahead of Vialle.

“I felt good all weekend long. I was the fastest on this track. Unfortunately, I had that crash in the first lap of race 2. I went over the berm and was thrown from my bike, next to the track. I was buried under my Yamaha and struggled to push it away from me. I came back strong, but had a collision with Haarup, who made a small mistake. I’m disappointed with the result, but not with my riding. I’m looking forward to race in Saint-Jean d’Angély next weekend. A track I really like.”

“I struggled a lot with my shoulder this weekend. In the sand, it’s even more difficult, because I have to stretch my arm and shoulder even more. The pain got worse during the races. It’s so frustrating. In the beginning of the year I worked so hard to get back after my knee surgery. When I was almost at my best level, I got this shoulder injury. I know I can do much better, but the pain is holding me back.”