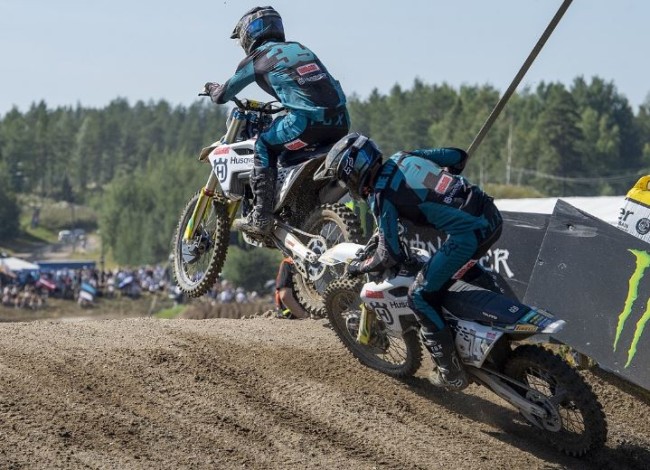 With a memorable Grand Prix of Sweden in the rear-view mirror, the Husqvarna Factory Racing riders leapt across to Finland for round sixteen of the 2022 FIM Motocross World Championship. Hyvinkää, a track that has not appeared on the calendar in eight seasons, played host to even more Husqvarna success, as Brian Bogers ripped to a moto victory in MXGP and Kay de Wolf claimed another podium finish in MX2.

It was yet another memorable Grand Prix for Bogers, who looked at one with his FC 450 on such a tricky surface. Starting moto one in third place, thanks to the power within his steed, it took him absolutely no time at all to move into the lead and he did not look back from that moment on. Lapping a second faster than his competition on a consistent basis, he eventually won the moto by nine seconds. Unfortunately, a couple of mistakes restricted him to sixth in the second moto and caused him to miss the overall podium by a single point. Such a strong showing helped him climb to sixth in the standings.

Pauls Jonass endured a tricky day at Hyvinkää, as a hard fall in qualifying left him in some discomfort. Jonass put his head down on race day, despite a bad gate pick, and charged from the back of the pack to thirteenth at the chequered flag. Eight valuable points were claimed via the ranking. The second stint was a much stronger showing for Jonass, thanks in part to a better start, as he battled in the lower half of the top ten and crossed the finish line in tenth place. 13-10 scores put him in twelfth overall on the day.

Putting his FC 250 on the MX2 podium in a rather convincing fashion, Kay de Wolf raced to impressive 3-2 scores in Finland. The first moto was a spectacular affair – he enjoyed a race-long battle with his teammate before taking control of third place. ’74’ was on the verge of claiming the Grand Prix victory in the last stint, as he battled for the victory until the very last corner before ultimately settling for second place in the moto and overall classification. It was a superb display that resulted in him taking his fourth podium of the term. De Wolf has progressed to seventh in the championship standings now.

Roan van de Moosdijk continued to make impressive progress in just his third race back from injury. Podium pace was on show once again, as he held third for eight laps of moto one before giving way to his teammate. Still, ’39’ held on for his second fourth-place finish in succession and established some momentum before the second moto. Such pace was put to good use at the end of the day – he charged into the early lead and was en route to the moto win until a small fall caused him to drop to third. Unfortunately, the mistake cost him a spot on the overall podium too. 4-3 scores left him in fourth overall.

The final triple header of the year continues this coming weekend. The penultimate stop of the 2022 FIM Motocross World Championship, the Grand Prix of Charente Maritime, will be held at the historic circuit of St. Jean d’Angely on August 21.

Brian Bogers: “I am very happy with that first moto. It was just amazing and my FC 450 worked incredibly well. I felt so good on the track! I wanted to replicate that ride in the second moto, but I made a couple of errors. I pushed too hard at the beginning of the race and then made some mistakes. I wanted to be on the podium, of course, but I am happy with our progress.”

Pauls Jonass: “I was quite lucky, after crashing hard in the qualifying race yesterday. I was left with a bad gate pick today, because of that, and had to fight from the back each time. I was trying to get in a rhythm today and I was happy to finish with a solid ride in the second moto. There are some good tracks ahead, so we will not stop pushing.”

Kay de Wolf: “I ran out of time in that second moto. It was a difficult race; I really gave it my all and I just missed out in the end. I am happy with my riding and my feeling on my FC 250 though. I am looking forward to France next weekend. I just cannot thank the team enough – they are working so hard for us and I really appreciate it.”

Roan van de Moosdijk: “I had a good gate pick today. My start was not too bad in the first moto and I made some good passes early on. I struggled in the middle of the moto, because I need to get used to the intensity. Where do I even begin with the second moto? I took the lead and just did my own thing. I led for more than half the moto, but hit an edge in a corner and crashed. I am angry with myself. This is a big improvement though.”