Gajser, Evans and Fernandez on a strong outing in Indonesia 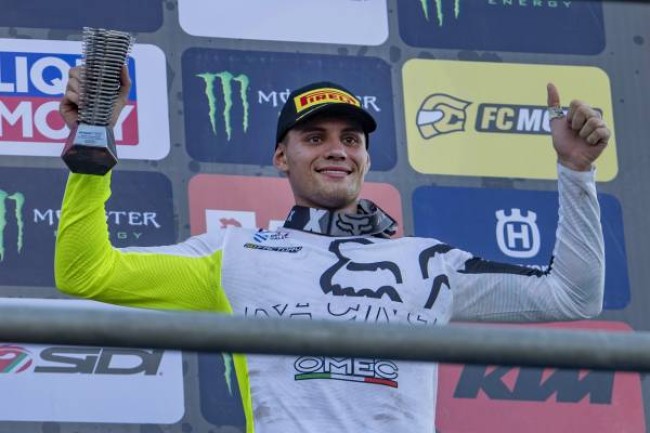 Nested beneath the looming shadow of Mount Tambora The FIM World Motocross Championship visited the volcanic Indonesian island of Sumbawa this weekend.

Traditionally, the island is known as the source of sappanwood, as well as honey and sandalwood; and for witnessing the largest volcanic eruption in recorded human history, but it was Team HRC’s Tim Gajser who blew the roof off the MXGP class today with a double-win, adding a further 50 points to his 2022 GP tally.

Gasjer holeshot race one and simply didn’t look back, winning comfortably by almost five seconds whist looking smooth and in control aboard his immaculately prepared CRF450R.

Team Honda 114 Motorsport’s Rubén Fernández also had a relatively comfortable race, rounding lap one in third position and staying there for the whole race. The Spaniard looked confident and fast throughout the race as he matures as a regular MXGP contender.

Although Mitch Evans struggled the whole weekend with severe stomach pain the Team HRC rider had a good outing in race one, pushing hard throughout the moto to recover from eighth position on lap one to sixth at the finish. Mitch’s return to MXGP racing after almost two years away with injury continues to see improvements race by race.

In the MX2 class the single Honda entry was carried by Shiptocycle Honda SR Motoblouz’s Stephen Rubini. Although the Frenchman featured in Saturday’s free and timed qualifying sessions, Stephen had picked up a stomach illness and had to miss Saturday’s qualifying race and take the challenging last gate-pick for Sunday’s races.

In race one Rubini rounded lap one in ninth place but worked hard in the 32 degree heat to reach seventh by the mid-race point and finish the race in sixth.

MXGP race two saw Gajser battle in the early laps; initially in third and then briefly drop to fourth. Knowing he had the speed and stamina to win, the Slovenian took his time to work his way to the front; and by lap three ‘Tiga’ rode his CRF450R smoothly around the leader to head the race and take the win by almost four seconds and the MXGP overall win. Gajser now leads the World Championship by 125 points with seven rounds to go.

Gajser’s teammate Mitch Evans had a bettor start in race two and set-about a quick attack to push into sixth by lap two. The Australian kept up the pressure on his competitors and pushed into fifth place on lap five where he finished the race. Evans finished the day in sixth overall.

Rubén Fernández had a similar second race in Indonesia, but struggled a little to quite find the same flow as race one. He rounded lap one in fourth place and stayed in this position for the duration of the race, but his speed and consistency paid off with a third place overall finish and a well-earned podium.

For the final MX2 race of the day Stephen Rubini suffered from a poor start and struggled to make progress. An intermittent electrical problem left him with inconsistent power and opted for the safer option of avoiding jumping the larger jumps and taking the available championship points, albeit further down the field than he’d hoped.

Rubini sits in a comfortable eighth place in the MX2 Championship with seven rounds remaining.

MXGP racing returns to Europe for Round 13 in the Czech Republic in three week’s time.

Tim Gajser 243:
It was a great day today going one-one and really having fun out on the track. The first moto was almost perfect, getting the holeshot and controlling the whole race to take the win. I felt really good and the track was a lot better today so well done to the track crew who worked on it. In race two I didn’t get quite as good a start and was fourth but I made some really nice passes and within a few laps I was in the lead. Once again I was able to control the race and take the win and my eighth overall of the season. My lead in the championship is now 125 points so I am very happy with how the season is going. A big thank you to my whole team for working so hard and a big thank you to the people of Sumbawa who have been great since our arrival. I am already looking forward to coming back next year.

Mitch Evans 43:
Another season-best performance so I am very happy with that, especially after feeling so bad earlier in the day. I really had to fight hard in both races to keep my pace up and keep the riders behind me, so this was a massive effort and it feels great to have that effort pay-off. Scoring 31-points and getting sixth overall after six-five moto scores is a nice boost heading into these couple of weeks off, so now I will keep working hard and keep this momentum for the next round in the Czech Republic.

Rubén Fernández 70
Honda 114 Motorsports
I’m very happy with my podium position this weekend. I was third in moto one and fourth in moto two. My riding was very solid and I found some good speed and flow on the track. I struggled a lot with jet lag and on Saturday / Sunday didn’t sleep until 05.00 on Sunday morning, so I only had a few hours sleep before today’s races. I didn’t think that I’d have much energy, but somehow I found it. The track was OK, but quite sketchy in some parts as well. It took three days and five flights to get here and it’s the same going home. It will be nice to get the return flights done.

Stephen Rubini 38
TEAM SHIP TO CYCLE HONDA SR MOTOBLOUZ
I was a shame that was sick this weekend. I’m unsure what the true cause was but I struggled with the cold of the air-conditioning and then the heat outside. I also had some severe stomach pain that was hard to ignore. Although the adrenaline of the races helped to take my mind off it, my reduced energy was also a challenge. Then in the second moto I had to manage an electrical problem and could not risk jumping the many jumps. I think some water got into the electrical mapping switch and caused the issue. It was an interesting trip, but it would be nicer to stay longer as it is a long way to travel for one race.

Gordon Crockard
Honda Motor Co. Ltd
The long haul trip here to Indonesia has been successful for each of our riders and teams who were able to make the journey. Tim was sensational throughout the event scoring maximum points and demonstrating his ability to be the best rider in the world. Rubén was brilliant, managing himself so well as a rookie for this overseas trip and putting himself proudly on the podium after riding superbly, especially in race one.
Mitch Evans also performed fantastically. His strong results placed him sixth overall, making it three Honda CRF450R bikes inside the top six. A positive showing of our elite machine.
In MX2 Stephen Rubini fought against a bacterial stomach infection all weekend and also a small technical issue in race two. He collected good points to elevate him up a position in the championship standings and Stephen will look forward to recovering to his best health again after the recent days of illness so far away from home. It has been a good day for Honda at this round.