Double podium for GasGas in Indonesia 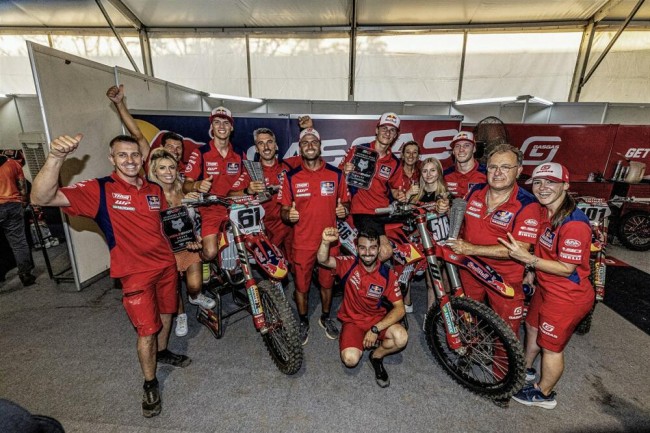 Thousands of miles away from their base, Red Bull GASGAS Factory Racing just enjoyed even more podium success at the Grand Prix of Indonesia. The all-new circuit of Samota-Sumbawa hosted round twelve of the 2022 FIM Motocross World Championship in front of thousands of passionate fans, who enjoyed watching Jorge Prado and Simon Langenfelder claim podium finishes in their respective classes.

Jorge Prado continued his run of podium finishes and pushed his season tally up to nine, despite facing the challenges that come from racing on the other side of the world. ’61’ started the first moto in second place and shadowed the leader throughout, never dropping more than five seconds behind, before securing that runner-up spot at the checkered flag. Prado settled into second in the final moto, after claiming yet another holeshot, and held the position to the finish line for second overall at the Grand Prix of Indonesia. Another strong showing helped him move into second in the championship standings as well.

Jorge Prado: “It was a good weekend. I felt a little bit better than I did in qualifying yesterday – it was a tough track. I got a good start in the second race, but Tim had better pace and passed me. We are going up and now have some time before the next race. I will try to get some rest, do some good training and step it up.”

Simon Langenfelder was so impressive on his MC 250F yet again; he ripped around the track and showed some impressive pace in both stints. ‘516’ made more progress than anyone else in moto one. A couple of impressive passes helped him move from sixth on lap one to third at the finish line. It was the second moto where he really shined; he chased down the race leader whilst posting the fastest lap times, made the pass stick and started sprinting away. Although a crash forced him to eventually settle for second, that was more than enough for second overall at the Grand Prix and his third podium of the season.

For Mattia Guadagnini, his first trip to Indonesia was a memorable one and another sign of his potential on the MC 450F. Guadagnini managed to make more progress than those around him in the first premier-class moto; he climbed from tenth on lap one to eighth at the finish on a track that was tricky to gain ground on. Guadagnini was in the thick of the battles again in the second moto – he showed top-five speed and was competitive on his MC 450F. ‘101’ eventually took another eighth place and eighth overall on the day.

Simon Langenfelder: “Today was quite good. I was third in the first moto and second in the second moto. I had the lead in the second moto, but had a small crash and threw it away. A podium is always nice and being second on the box is great! The bike was amazing. We will rest now and go again in two weeks.”

Mattia Guadagnini: “I finished eighth again! I did not feel that good today, to be honest, as I got a little bit sick. I think that the second moto was better than the first. I had more rhythm and the riding was better. I just survived a little bit though, because of my illness. Going 8-8 for eighth overall is not bad at all, but I think that I could have been closer to the front.”

The Grand Prix of Czech Republic is the next stop on the FIM Motocross World Championship calendar. The Red Bull GASGAS Factory Racing trio will head to the iconic circuit of Loket on July 17.