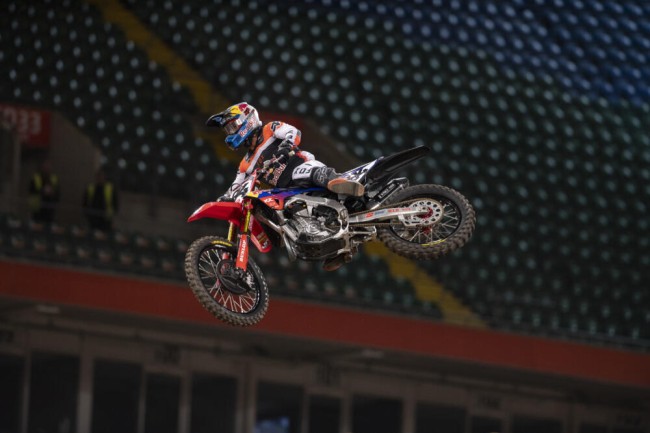 So day one is in the books at Cardiff, and if you have never been to an AMA supercross or can’t go because you didn’t get the jab, this event is the one you want to go to.

A full blown supercross track, Roczen v Tomac putting on a lap time battle in the first timed session as the star duo showed they have lost none of their indoor speed despite no supercross racing since May! Roczen, Brayton and Tomac all shot to the front in Timed Practice and put on the a charge for the forst 3 or 4 laps like it was the start of the main event! Tomac told me he has only ridden four times before this race but it didn’t take long for him to feel comfortable even if he said it was his first time hitting a steel ramp as a finish line jump!

The contrast in styles is evident, Roczen so smooth and light on the bike was doubling the corner after the finish line, the only one doing so, until they put a pole and extra tuff blocks in the way for the timed session and ended the genius line!

Tomac is much more aggressive, nailing the throttle before each jump and laying waste to the turns as the champ pipped Roczen for fastest time.

Dean Wilson looked good on the Honda and battled Vince Friese for the top time in the second session but the surprise package was Luke Clout who wasn’t that far off Tomac and Roczen until they really dropped the hammer at the end of their second session, Clout was fourth behind Savatgy in group but really caught the eye despite a crash in the long whoops section and had the same speed and Vince Friese who was fastest in group 2. Look out for him to get in the mix tomorrow night!

Josh Grant reminds you of just what a natural talent he is, as he makes it look so easy, Windham style – you will certainly enjoy watching him ride tomorrow if you are in Cardiff and it’s nice to have him back on track. Chad Reed is also back but struggled to get a lap in during the timed session without a mistake but was solid in the first session.

The 250 class is deep and Max Anstie, the home hero, is shining on the Honda, fast, aggressive and technical Anstie will the guy to watch for home fans tomorrow night – let’s hope he can get the start becuase his pace is in the mix with the front runners!

Derek Drake was the fastest qualifier by a tenth over Aussie Aaron Tanti, and both were visually rapid. Drake has impressed at times in the USA and looked really good today in Cardiff. Shane McElrath has a sweet style and while you would have expected him to be on the 450, he is certainly a contender for the win. Cole Seely is back and doing some huge whips over the finish line jump and has lost none of his skills and neither has Justin Bogle who busted out a nac-nac over the same jump and was having a good time.

The 250 class is wide open with half a second between the 10 quickest times – it might even be the best racing of the night tomorrow!