Tomac, Roczen, Savatgy and Drake on day one of WSX at Cardiff 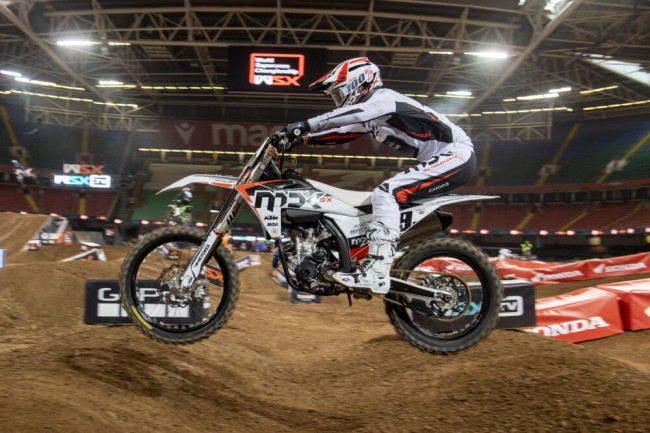 Bikes hit the track for the first today, as the 2022 FIM World Supercross Championship roared into action, with wildcard Eli Tomac quickest on day one in the WSX (450) class, while Derek Drake topped the times in the SX2 (250) class.

After all the build-up to the British Grand Prix finally kick-started a new era of global supercross, and it was 2020 world champion Tomac that set the fastest time of the day on his Yamaha YZ450F.

The time sheets in the SX2 class were topped by 23-year-old American Derek Drake on the MDK Motorsports KTM, with two tenths of a second splitting the top-three. Craig Dack Racing’s Aaron Tanti finished the day second quickest, in front of Shane McElrath, meaning Rick Ware Racing is the only team with two riders inside the top three across both classes.

Eli Tomac said on setting the bar on day one, “Today was good. This is a real track, this is the real deal. I think the track has a good mix of speed, technical, and rhythm sections. The surface is actually pretty hard, but I think that’s a good thing as it’s going to make it a little bit more technical and it will keep the passing options open. In free practice I was back and forth with Ken [Roczen] and overall I felt good. It was good to get riding as I was pretty jet-lagged before that. What’s cool about this series is that we’re bringing it international and I’m pumped to see new supercross fans.”

“My first day was actually really good,”Ken Roczen said on setting the second quickest time.“I had to shake the awkwardness off a little bit and we had brand new wheels, little things like that that feel a little stiff. The track is really hard-pack, rocky, and the berms are super flat so it made it tricky out there because we would lose traction a lot. Overall I had a really good day though; Eli and I went back and forth a couple of times having the fastest lap. I’m second and only a couple of tenths off so I’m pretty happy with how today went and I’m glad I was able to ride a little bit before we start racing tomorrow. It should be a really good day.”

“The track’s good and I think it’s going to make for great racing, that’s what’s cool about it,”third quickest man Joey Savatgy commented.“Right now we’re just starting to find some lines but the rhythm sections are giving some options, which is good for the track and good for the racing tomorrow. That’s what’s going to be the best part and it should shape up pretty well. It was getting slick and there are some marbles but I think the rhythms are built really nice, everything’s pretty clean, and it’s not like it’s a break-or-die situation out here. The whole World Supercross crew have put together a good deal and I think it’s going to be even better tomorrow.”

On going into tomorrow having set the fastest SX2 time, Derek Drake said, “Definitely a good opening day. I wasn’t sure what to expect but I went out there and was first overall and I feel ready for tomorrow. The track’s good; it’s tight and the rhythms are tight together but I felt that you could have good corner speed. The town’s cool too: I went and checked out downtown and it’s a great place. It’s exceeding my expectations so I’m looking forward to the next one already. Tomorrow I have no idea what to expect and I know that it’s going to be a different schedule to the one I’m used to with opening ceremonies and all that. But that should make it fun, we’ll have a good time, and we’ll try to bring it home on the podium.”

The second round of timed practice begins from 13:00 tomorrow, local time, before the grand opening takes place at 17:00.

Heat races start from 17:30 before the WSX Superpole session that will determine the final gate pick for the top-10. The World Supercross Championship’s innovative three-race main event format – with shorter race durations increasing the overall level of intensity and unpredictability – start from 18:30 for the SX2 class, with the gate dropping for the WSX main events at 19:45.