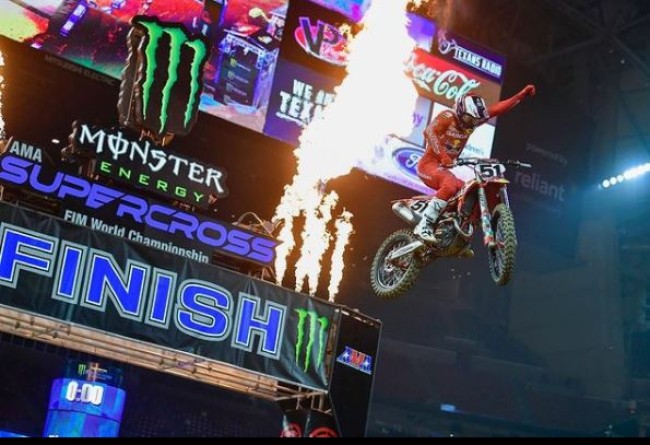 Justin Barcia: There is no denying Justin Barcia had a lot of pressure on his shoulders coming into Houston. With two wins at the last two opening rounds of the respective supercross seasons, Barcia was automatically presumed to be at least a contender this year to try and make it three in row. Secondly, he was on a new team signed for big money as the sole 450 man representing a brand new brand in supercross with Gas Gas. These two situations were amalgamated together with the fake A1 win video by TLD and that encapsulated the pressure for Barcia at Houston.

But from the moment he took to the track, pressure or not, he looked great on the bike and he looked determined to win! He got the start he needed and held off Ken Roczen in the main and barely made a mistake, it was seriously impressive and Gas Gas have already justified their signature of and they salary paid to Barcia for 2021. He and they have just won the biggest race of the season in the USA – brand awareness has already been accomplished in North America and beyond!

Ken Rozen: The German came in quietly confident to the season. Usually Roczen likes to get the suit on, arrive in a fancy car and enjoy the attention but this year was a calmer approach. He said he loved the bike then simply went out and proved it in a very calm race despite the pressure of the first round. He made quick and effective passes when he needed to in the early laps but assessed the risk of attempting a pass on very intense Justin Barcia and decided it wasn’t worth it. Roczen looked like he had more pace if he had the lead in the way was riding but felt a second place in the opener and no drama was the best option of the night.

Roczen looked superb, maybe the best he has since that infamous crash in 2017, he didn’t look anywhere near the edge and was in control of every decision and movement on the bike. He looks ready to challenge for this title admitting to a change of mental approach in a bid to accomplish the one big goal still not ticked off on his career.

Marvin Musquin: This was a race of positive verification for Marvin Musquin. After missing 2020 and a bad knee injury the Frenchman didn’t seem 100% sure himself that he could run at the level he had in the past but he proved to himself and everyone else that his lap times in qualifying and his race pace is right where it needs to be to remain one of the elite guys in supercross.

With that result and the ensuing confidence under his belt, Musquin should be able to relax into the season and really go for this title.

Malcolm Stewart: For a fifth place result, Malcolm Stewart didn’t get too much TV time but he rode a great race in his first appearance as a factory Yamaha rider. Smooth, fast with his fitness apparently now on point, Stewart looks to have all the bases covered this year – this might be the season we see Malcolm’s true potential in supercross after flashes of brilliance in the previous seasons.

Dylan Ferrandis: It was not looking too good in practice for Dylan Ferrandis when he was hovering just inside the top 20 at times – it appeared missing a month of testing had really hurt him. But despite only riding 6 times since his broken hand to get ready for Houston, Ferrandis produced when it mattered in the main event to take seventh and run down teammate Plessinger at the end to get that spot. He beat Tomac, Webb and Osborne, three pre-season title contenders to keep him nicely positioned in the championship chase, and there should be a lot more to come from Ferrandis with more time on the bike. Given his situation coming in, the first round couldn’t have went much better.

Christian Craig: Finally! With so much talent and style on a bike it shouldn’t have been 5 years since Craig’s last supercross win. Like his dad, Mike, the talent is there but putting all the pieces together has been difficult for Christian. We saw what he could do on 450 outdoors so it’s impressive he can just adjust back to a 250 and a new brand so quickly and come out and blitz the competition.

Craig said he wants to win the 250 supercross title before he goes 450 full-time and he wanted to be on the Star Racing Yamaha this season and it’s so far, so good. He looked superb in Houston but this is the level he has always been capable of riding, now it’s a question of handling the pressure of a title challenge. But that win looked to be a huge weight off his shoulders with the emotion he showed afterwards. Winning isn’t easy, even when you have the natural talent of Christian Craig.