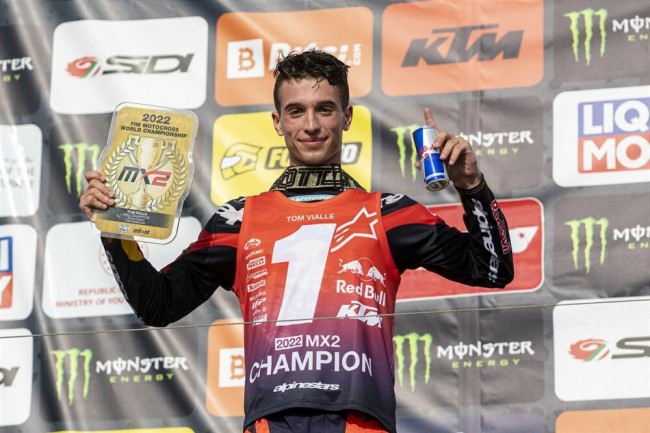 KTM have won their fourteenth MX2 world championship since 2004 after Red Bull KTM Factory Racing’s Tom Vialle finished 1st overall in the eighteenth and final round of the 2022 MXGP series at Afyonkarashisar in Turkey.

MXGP wrapped 2022 in the hot and hard-pack climes of Afyonkarashisar and the Grand Prix of Turkey. All eyes were set on the duel for the MX2 title between Tom Vialle and Jago Geerts with the Belgian holding a very narrow two point lead at the top of the standings. Vialle, who had triumphed at both back-to-back Turkish rounds in 2021, won Saturday’s Qualification Heat to head to the start gate first on Sunday.

In the first moto the Frenchman made an ideal start from Pole Position to seize the holeshot. He had a three second margin by the end of the second lap and rode unchallenged to the checkered flag as Geerts placed 10 seconds adrift. Vialle was now fronting the championship by one point. In the second start Geerts made the better getaway but Vialle attacked and was seeing a clear track by the second circulation. The rivals battled and even tangled but it was Vialle who recovered and reached the finish line first to begin the celebrations. He is the fourth Red Bull KTM Factory Racing rider in the MX2 era to have taken more than one FIM title on the KTM 250 SX-F and the second Frenchman to do so.

The result and the accomplishment was the ideal way to end his MX2 term and the 21-year-old can now think ahead to his challenge in 2023 AMA Supercross and Motocross 250MX/SX competition.

DIGA Procross KTM’s Liam Everts ended his rookie season in the world championship with a 6-12 scorecard in Turkey and 10th in the MX2 standings. The Belgian entered the top five on at least two occasions and will draft into the Red Bull KTM Factory Racing structure for the 2023 campaign.

The 2022 calendar will reach a conclusion with the 75th Motocross of Nations at RedBud in the USA in two weeks.

Tom Vialle, 1st and 1st for 1st overall in MX2 & the 2022 FIM World Championship title: “I’m so happy. To finish the season like this is so nice. I felt good today even if the track was a bit sketchy. When I had the tip-over in the second moto I thought ‘oh, it’s over’ but then I saw Jago had gone down as well so I got up as quickly as I could. We were riding so fast. I won some time. It was really crazy and I was lucky but that’s part of the game. This is my final race in MX2 so it was special. I wanted to enjoy the last few races and with the team, who have given me such a strong home for four seasons. To have the title for the second time is amazing. The first one was crazy but also this one because it was so tight. I had to come here and go 1-1 but that wasn’t so easy.”

Joel Smets, Red Bull KTM Factory Racing Team Manager: “What a day, what a year, what a championship. I don’t think I have ever felt stress like that in any season, even in my own racing career. We’ve been in close situations before but we knew it would all go down to some very tight action today and Tom was able to deliver. I’m so grateful to everybody behind us and I like to think that somewhere and somehow Rene was looking down and enjoying that one.”

Dirk Gruebel, Red Bull KTM Team Technical Co-ordinator: “Unbelievable today and it is unreal what Tom managed. The mindset was there in qualification but what a difficult situation. He won the first moto but of course it would go down to the second and both riders rode so fast. It was such a strong pace and they went over the limit. Then we had a gap and that was a turning point. Even though Jago did not give up it seemed like Tom just wanted it a bit more. A real drama today but we walked away as the winners and I’m happy for Tom and the whole team after a difficult season. We were always chasing so to take the title is something special.”

Robert Jonas, Head of Motorsports Offroad: “We faced logistic and sporting obstacles for 2022 and the shortest off-season we can remember and to finish the championship in this way – with another title for our superb team and the talent of Tom Vialle – is the best payback. All the credit must go to the entire Red Bull KTM Factory Racing team who never gave up and kept pushing and working and developing and with one goal in mind. A brilliant effort and it is something the whole factory can be proud of.”

Pit Beirer, KTM Motorsports Director: “I’m extremely happy right now because it has been a challenging season for us in MXGP and how we went into 2022 was especially tough. Tom had to peg back a big points gap and to be able to take it to the last race on the last day and then win is an incredible achievement. I want to thank the whole team and everybody in the factory who has built this fantastic motorcycle and of course to Tom who has done an outstanding job. He is a real world champion and I feel he is ready to go to the USA. It was a masterpiece to deliver those two wins today under such big pressure. Not many people can do that.”