Febvre ends his MXGP season with a moto win 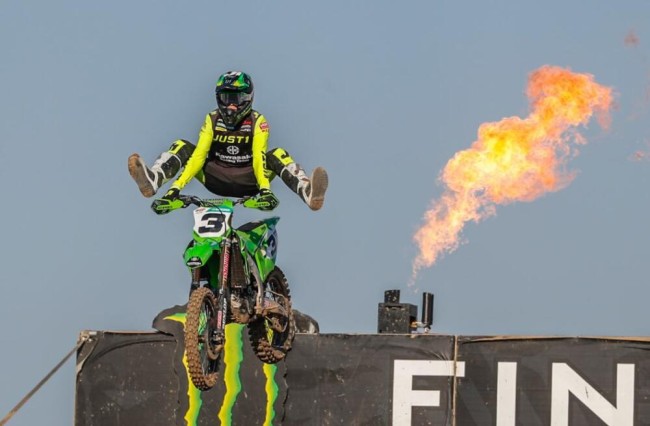 Romain Febvre and Kawasaki Racing Team MXGP rounded out the 2022 FIM World MXGP Motocross Championship season with a moto win and a podium in the final round of the series at Afyonkarahisar in Turkey.

The Frenchman made good use of KX450-SR power to storm through turn one near the front in both motos and swept past into the lead on the exit from turn two each time. His joy was short-lived in the first moto as a couple of over-exhuberant younger riders cast caution to the wind and in the ensuing chaos the Kawasaki rider, his line cut, was pushed back temporarily to fourth. By half-distance he had regained third until he slipped off in a long polished turn and was pushed back to eighth at the finish. Learning from the experience of race one he adjusted his lines to successfully defend the lead through the opening lap and soon established a comfortable lead which he was able to control to the finish. The moto victory – his first of the year after winter injury had kept him out of action until mid-season – also secured his first podium of the season after several near-misses recently. His final series ranking is fourteenth even though he was only able to contest eight of the eighteen rounds.

Romain Febvre: I’ve been expecting this podium in recent weeks but the moto win is even more important; it’s good to end the season like this. In the first moto I was running third but five laps from the end I fell and lost several positions; with an eighth place from race one I wasn’t expecting a podium at the end of the day but the second moto was great with another good start and already after a few corners I was leading. Of course I felt some pressure at the end of the race as Gajser was just four seconds behind me but I had enough energy to keep the gap until the chequered flag. I’m happy to be able to finish the season on a high note for both myself and the entire team.”

KRT teammate Ben Watson confirmed his twelfth-placed series ranking with thirteenth overall at the final round. The Englishman finished fifteenth in race one from sixteenth on lap one; he converted sixteenth at the start of race two to twelfth at the chequered flag.