Roczen on being docked points, Sexton update, Lawrence on his win 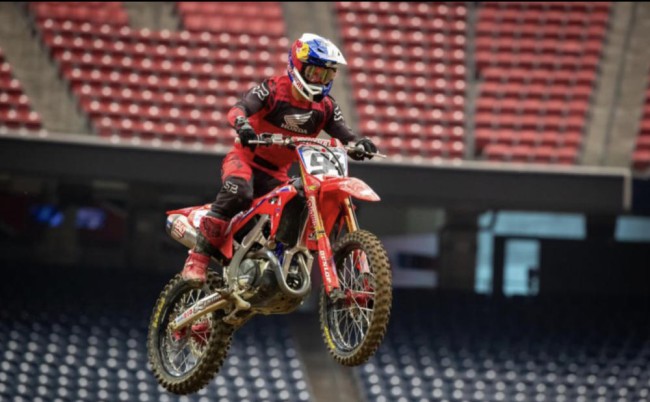 In just the eighth AMA Supercross race of his career, 17-year-old Team Honda HRC rider Jett Lawrence notched his first indoor win, leading from start to finish in the 250SX East Region main event at the Houston 2 round in NRG Stadium. It was a convincing performance by the young Australian, who also topped his heat race and rode flawlessly in the main event, setting the race’s fastest lap time in the process.

Meanwhile, it was a challenging evening for the premier-class riders on Honda’s factory squad, as rookie Chase Sexton suffered a hard crash in the main event and wasn’t able to finish, while Ken Roczen had to charge forward from a poor start in the 450SX main, working his way up from 14th place on lap one to fifth at the finish. Also of note was an impressive podium finish by Muc-Off Honda rider Justin Brayton, who last year rode for Team Honda HRC.

Ken Roczen: This was a bit of a tough one for us. We didn’t get good starts again, which I have to figure out, and that made life on this kind of track very difficult. I came around in maybe 17th and had to fight my way up, eating roost the whole time. The track deteriorated very quickly and it was a long main event, but we made the most of it and salvaged fifth place. There was an incident with the red cross flag where I got docked four championship points, which I’m in disagreement with, as my view to the flag was blocked by Dylan [Ferrandis]. I think a warning or a fine would’ve been appropriate for the simple reason that I have never been involved in an incident with jumping on a red cross flag; I just don’t think the situation was as clear as they made it out to be. I’m a little bit frustrated about it because we would’ve had the red plate, but at the same time, it is what it is. We’re just going to look forward to Saturday and make the best of it.”

Chase Sexton: The day started off pretty good. I had pretty good practice qualifiers and was second in both of them. I got my first heat-race win in my second race on a 450, which was good. In the main event, I got a good start and was really feeling good out front—in control and hitting my marks really well. I put a pretty good gap between myself and [Eli] Tomac but made a small mistake that cost me big—hit the ground pretty hard. I’m really sore and my right shoulder is pretty beat up. I hope to be back racing here soon and try to finish the job and get my first win.”

Jett Lawrence: Everything just clicked together really well. Qualifying was really good–I was consistent, finishing third in the first one and second in the next. I was struggling with the track then, but when it came to the heat race, everything just clicked together really nicely. I got a really good start and controlled the lead. I had that adrenaline going after my first heat win, and going into the main event I was trying to stay calm. I nailed my start, and the rest is history. I just clicked off laps, and it felt like a video game. I had such a good flow and was doing everything with ease, almost; I was relaxed, and it felt like a practice day. I couldn’t ask for a better day.”

Erik Kehoe: Well, it was an up-and-down night for the team. I’m extremely proud of Jett for his performance, because it shows that all his hard work is paying off. Chase showed really good speed all day and was off to an awesome start in the main, but an unfortunate crash ended his night early. He’s sore and will undergo further evaluation. Hopefully he’ll feel better soon. Kenny had bad starts which is unfortunate considering how fast he was, but he’s still in a good position in the points. We’re looking forward to Saturday.”