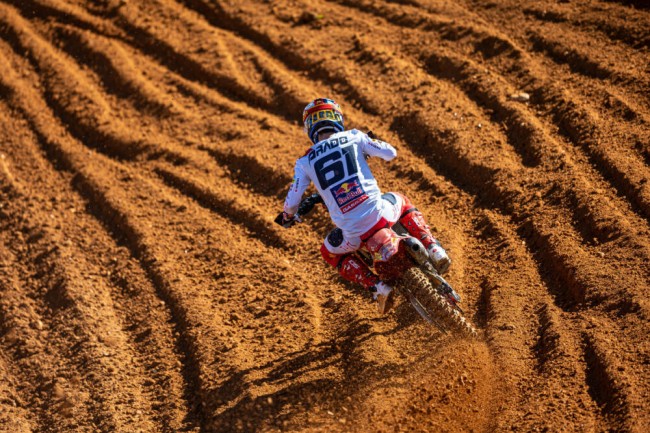 Jorge Prado took the opening moto win but he had to fend off a very determined Brian Bogers to take the victory! Tim Gajser didn’t get the best start and took a while to find his rhythm but once he did he really started to fly, making moves on Jonass, Seewer and Coldenhoff and, by the last two laps, he had Bogers and Prado in his sights but just ran out of time to make a move.

Glenn Coldenhoff took fourth from Seewer with Fernandez having great ride to take sixth on the last lap off Jonass as Renaux crashed out of sixth to finish 11th.

In race two Jorge Prado took another holeshot but this time Gajser got away well and was right on Prado’s back wheel from turn two. Gajser shadowed Prado for the first half of the race but as soon as he saw his opportunity he made it happed to fire up the inside and take the lead, pulling away to an emphatic win.

Prado stayed calm to take second and the overall win saying: “Second moto I could hold Tim for a few mintues, it was tough he was riding very well. Not super happy with the riding but super pumped to win the overall. I wasn’t riding like myself (this season) even today I struggled a little bit. Now I can look ahead to the next races.”

Glenn Coldenhoff had his best GP of the year taking third in race two but Brian Bogers worked his way into fourth taking the podium off Coldenhoff for his first MXGP podium just two weeks after dislocating his shoulder in Argentina.