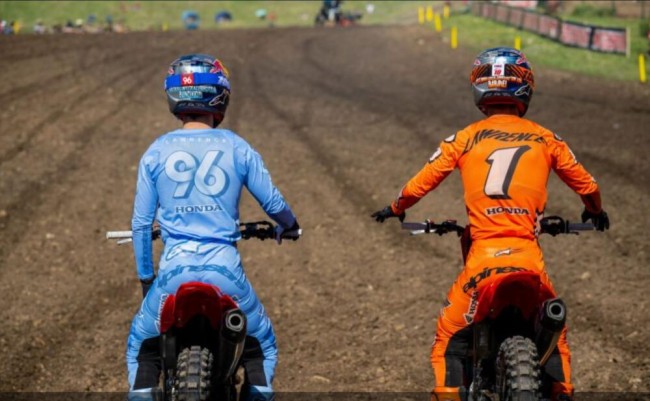 Hunter Lawrence took the opening moto win after Michael Mosiman crashed out of the lead having passed Hunter and Seth Hammaker to get it. In the end it was Hunter with the win from Jett who came from sixth and Jo Shimoda who followed the Aussie’s every move.

Race two was the race we all wanted. The two fastest in America, Jett and Hunter Lawrence, going at it for the moto win and the overall win! Hunter took the lead as Seth Hammaker crashed with Jett second but Justin Cooper was on it early and then momentarily pased Jett for second but that lit a fire under Jett and he picked up the pace, passed Cooper again and set after Hunter once more.

Jett eventually made the pass but Hunter wasn’t done and learnt some lines then passed Jett back only for Jett to get back in the lead and with with five minutes left, backmarkers gave Jett a slight edge and enough to get to a 2 second lead. But on the last lap Hunter put on a huge charge to keep the pressure on, he got on his back wheel halfway round the lap but couldn’t make the pass as Jett won the race and the overall! Hunter will be kicking himself for those couple of laps through the backmarkers but it was Jett who yet again prevailed – what a battle on fathers day for the two brothers to put on a clinic and go 1-2 in front of the their dad.

Hunter said: “I’ll get him back anothers day! While Jett said, “I had to get otherwise he would have gained some points on me!”