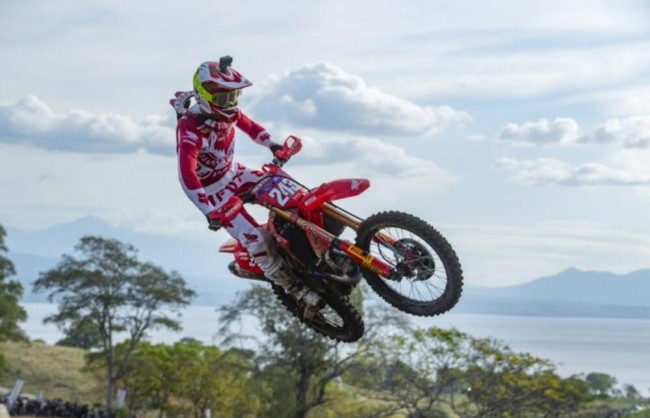 An overjoyed Tim Gajser, who rode to two steady top tens, said: “Unbelievable I’m speechless! To win one title is a lot but five, we have an amazing team. Thank you to my crew, I’m super happy.”

Brian Bogers dominated race one but missed the podium after a tip-over in race two that saw a Yamaha 1,2,3,4 and 5 with Coldenhoff, Seewer, Renaux, Van Donick and Vlaanderen making it a memorable moto for the Blu Cru who also went 1-2-3 on the podium despite Honda winning the world title!

Glenn Coldenhoff said: I’ve been waiting way to long. We’ve been working really hard and its finally paying off. I want to thank me for believing in me!”

Honda and Yamaha have dominated in 2022.

The MX2 title chase is open again after Jago Geerts crashed twice on race two after winning race one with Vialle ice cold to take the second moto victory under intense pressure!

Geerts went head to head with Vialle in race one and came out on top in an impressive ride but it all went wrong in race two.

Geerts was leading on lap two when he went over the berm, then over the bars before getting stuck under the bike and having to rejoin in last. From there Geerts was the fastest man on track but he crashes again with Haarup when trying to make pass and seventh was the end result after tough race for the series leader.

Up front and it was Everts who briefly inherited the lead before Vialle made the pass, but then the Frenchman went off track and Roan van de Moosdijk took the top spot!

Roan looked set to win with a three second leaf with two laps to go when he, unbelievably, went down putting Vialle back in the leaf with de Wolf all over his back wheel hunting that moto win but Vialle kept his cool and geld on for a huge win. The Frenchman is now only 15 points behind with four hard pack motos left including the next round at home in France!

Vialle said: “That’s was a tough race. I made a mistake and went out of the track. We made a big improvement on the bike today from yesterday. Second moto I had to win.”

Geerts said: “I had a perfect weekend until the second moto. Tough second moto but happy with my speed. Looking forward to France, it’s a track I really like and getting some points back.”