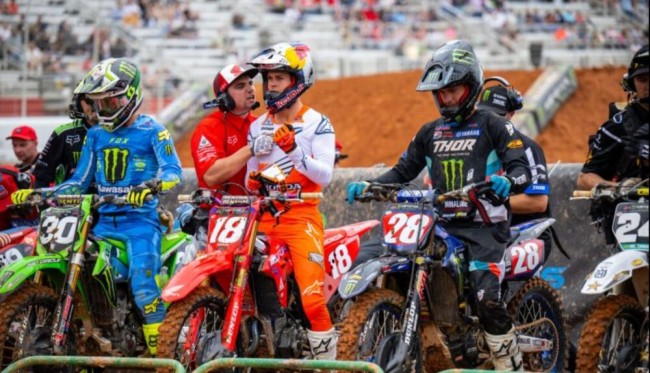 With a title on the line between Christian Craig and Hunter Lawerence in the middle of the 250 east/West shooutout, Jett Lawrence has straight up admitted he will do what he can to help Hunter win the title against Craig – with Craig hearing it in the press conference!

Jett said candidly: “The strategy is to do whatever I can to help my brother, I am just going to be there basically for my brother. I have already done my results and finished my season so, I am just chilling and being a right hand man for Hunter.”

Craig, who has an 18 points lead, responded by saying: “You just heard Jett, he’s going to be there for his brother, I have to be aware of that. Those two Honda’s trying to stick a front wheel in, I gotta be aware, I gotta be cautious in a away but still ride my own race. i do believe I am one of the fastest here, we will stick to the gameplan in my head and we will see.”

While Hunter commented: “It’s a unique kind of situation where Christian would have to finish for the title to fall in my favour, there is only so much i can do. I’m not going to do anything dangerous to him, I never have been a dangerous rider, or will be so, I am just going to do the best I can, what happens, happen. You never know, things could take a crazy turn but jsut focus on myself. Obviously we have our strategies if circumstances fall that way, but just take it as we go.”

This would be a huge title for Craig but historically he has never been good under pressure and despite showing more calmness this year he did admit he was nervous last week and then he went down while callenging Hunter for the lead and, with both Lawrence brothers saying they are going to be going for it, Craig will have to carry that in his mind all day heading into the main event. Can he cope with the pressure? That might define who is crowned 250 West champion tonight.