Jason Anderson offers update after crashing out at Detroit 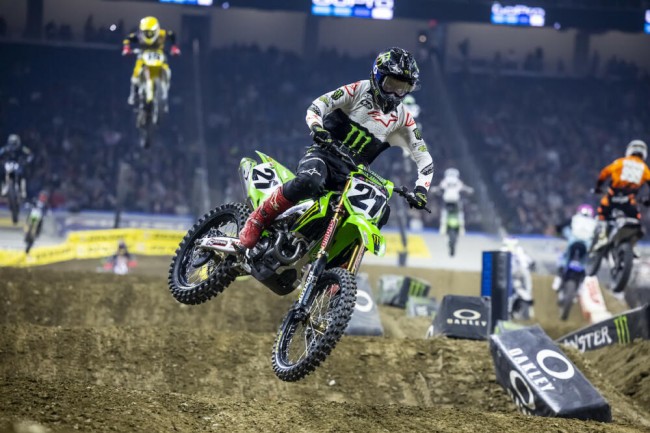 Round 10 of the Monster Energy AMA Supercross Championship brought the series to the famous Motor City of Detroit, Michigan, where Monster Energy/Pro Circuit/Kawasaki rider Cameron McAdoo secured his fourth consecutive podium result with a second-place finish. In the 450SX Class, Monster Energy Kawasaki’s Jason Anderson was involved in an exciting battle for the lead before a late-race crash ended his race.

Coming into the day with the expectation of testing different bike setups, Anderson started his morning by closely examining the layout in Ford Field during riders’ track walk. Anderson and the team discussed the day’s game plan before qualifying, anticipating how the track would change throughout the day due to the unique Detroit dirt which was tackier than in years past. In the later stages of qualifying, Anderson consistently recorded lap times near the top of the timesheet before recording a 43.716 lap time for third-fastest heading into the night show.

The beginning of 450SX Heat 2 saw Anderson utilize the impressive handling of his KX™450SR to trade positions with the front runners during the opening laps. Combining fast laps with consistent whoop speed, the No.21 Kawasaki rider ran comfortably in second before the start of Lap 4. In the later stages of the race, Anderson found himself having to adapt to the track’s rapidly deteriorating surface but, like a true veteran, managed the situation with ease and finished the short qualification race in second.

The beginning of the 450SX Main Event saw Anderson off to another strong main event start and trading positions back and forth at the front of the pack before taking firm control over second place by the end of Lap 4. The No.21 KX450SR rider utilized his whoop speed to take the lead two laps later. As the race unfolded behind him, Anderson was running comfortably out front and in control of the race. Near the halfway mark, the New Mexico native began feeling immense pressure from behind but refused to hand over the position easily. Despite his best efforts, the rider behind was able to take over the lead with 10 minutes left in the race. Never one to give up, Anderson stuck close behind the leader’s wheel, studying his line choices and mounting charges to regain the lead. Unfortunately, while making a charge for the lead, Anderson suffered a late-race crash that ended his night early.

Jason Anderson: I was feeling really good today from the start of the first practice. Probably the best I’ve felt racing in Detroit, and I think my performance throughout the night showed I had what it took to win tonight. Unfortunately, I pushed a little too hard while challenging for the lead and had a crash that ended my race early. It’s unlucky, but these things happen. I’m just glad I feel fine right now and am planning on giving it my all in Indianapolis next weekend.