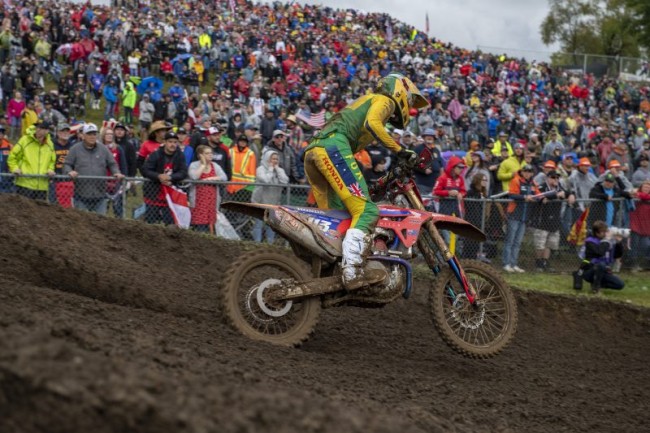 It has been a long, tough road for Mitch Evans over the last two years with a wrist injury that looked like it may end his GP career and forced him to take a year off from racing. But now, at the end of the 2022 season, the young Aussie found himself on the MXoN podium with a qualifying race win in MXGP and back towards the front of the MXGP world championship week-in, week-out. The light at the end of the long tunnel has become increasingly bright.

We took the chance to speak to Mitch about his year, his MXoN at Red Bud and what it’s like being teammates with Tim Gajser

A very good season overall for you but this must just top it off after all you endured last year to end up on the podium with two friends for team Australia and one of the biggest ever MXoN!

Yeah absolutely. It’s been a challenging year but from where I started the year barely making it around the track to fighting for podiums and wins and qualifying race wins is pretty cool. To top it off with a podium that was one of my main goals for this year and I achieved it, so gotta thank the boys for pulling through this weekend and getting to spray that sweet champagne, it’s been a long time coming but I’m excited to be healthy and going into the off-season, have a good off-season and looking forward to a strong solid next year.

The first moto you were good, a strong ride but that second moto you must have been really frustrated because you had a decent start and then dropped it that awkward corner.

Yeah first moto was really good, my startes this weekend were solid and then pulled another good start in the second moto, I think I was fourth or fifth then line came together with Prado and unfortunately tucked the front and then I was trying to make my way through the pack again then I lost the rear on the up ramp of the a jump and almost got landed on by Jago, had a big one and my bars were completely bent after that. I was keeping an eye the TV and figured I just got to keep circling incase Jett’s bike let’s go or something, I didn’t want to pull in, but I just couldn’t get used to how bent the bars were, But for sure really disappointed that I was up there in the first couple of turns and threw it away.

Your style is very relaxed, to me it looks like you are just sitting in an arm chaire going around the track but obviously you are going quick, espeically the last few GPs you have been in that top five, top three form. Have you always ridden like that, always been that relaxed on the bike? It looked like you ride with a margin of error, I remember Gordon Crockard telling me that when you signed for Livia’s team.

Yeah for sure, that’s how I’ve always ridden my whole life, I’ve had that comment a lot this weekend I don’t know why but I feel like when I am riding my best it looks like I am going really slow, that’s always how it’s been in my career. I’ll be like P1 in qualifying and everybody will be like, ‘dude you look so slow!’ It’s really good, I feel like I have to be really efficient on the bike otherwise I wouldn’t be able to last the race, I don’t like the feeling when the bike steps out on me, I want to be in control and not hit the ground.

For sure not! (smiles) When I crashed in Turkey my thought was, ‘aw, not again.’ I was so over the crashes but we know what is causing them so we can fix that issue and yeah, we will be solid for next year. Some things don’t got the way you want in life, my wrist injury, I didn’t even crash, I crashed because it broke. I over-jumped the jump and it broke on the landing and my hand came off and I had to bale off the bike. So that’s what I mean, it’s just little things like that that never goes to plan. For sure, I focused a lot on doing gym and strengthening my body this year, nutrition and everything that certainly helps when you are bouncing along the ground!

Did you expect to come back to this level? Because your wrist was so bad you apparantely didn’t know if you could race again so to come back to the elite level in MXGP is pretty impressive to me and obviously changing teams next year but you are progressing again in your career

Absolutely, for sure there were some days I thought, I would never be able to ride at that level again, but it was funny, before my wrist injury, I had never struggled with an injury before. I was always back on the bike way earlier than the doctors had said and I never had pain and it never hindered. And this was the first one that took forever. It wasn’t the break itself, it was the first surgery that I had in my arm that screwed things up so, things happen in life. At the end of the day I am very grateful for the journey it took me on, it made me a better person and a better rider. For sure at the beginning of the year I was like, ‘man, I don’t know if I am going to get back to that level.’ But I stayed patient and the people around me believed in me and it was a long season and I was certainly doing more than I needed to in the season to try and play catch up but I look back at it now and I am certainly grateful for everything that I did and all the hard days that I went through because it’s so much sweeter now to come back from something like that.

I believe you are changing teams, you have a good relationship with Honda and had the world champ to learn from but are you excited to do something different next year, different motivation and all that?

Absolutely, I’m very grateful for Honda and HRC for sticking my me the last three years, I think I missed more races that I was at so I am really grateful to them to stick by me through thick and then and they always had my back no matter what. And yeah, Tim, he has been the best teammate I could ever ask for as my first teammate on the world stage with a factory team. To have guy like that…very, very grateful, he always had my back and one of the nicest guys in the pits, for sure I am going to miss him next year.

To be a champion and be that nice, maybe not what you expect from a guy that level!

Absolutely and if you know his story and where he has come from, it’s just incredible the human that he is. The fame that he has and he acts like like he is any other person.