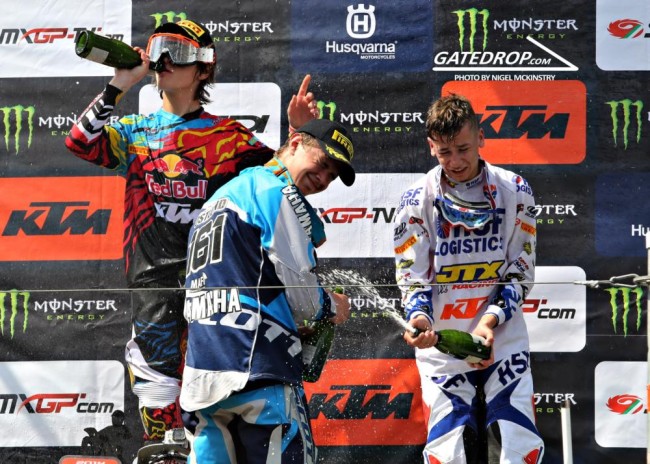 Max Engelen was a bright young talent from the Netherlands and had an EMX125 and an EMX250 podium to his name. Unfortunately, Engelen took a huge crash at the Lelystad practice track and as a result he walked away from the sport. It’s a shame as he could have had a good career in the Motocross world but it goes to show you don’t know what’s around the corner.

We caught up with Engelen to discuss his career and much more.

Gatedrop: Max, let’s start with the injury that meant he had to stop racing Motocross. Can you talk me through the incident and the injury?

Engelen: I think everybody already did see the crash video. It was my second time back on the bike after I got surgery on both arms for the compartment syndrome. I went on Saturday morning to the motocross track in Lelystad together with my brother. The track was in perfect condition and I went for some warm-up laps. There was a new leap which I already had jumped multiple times. I think it was the third lap that I jumped the leap again that day, because of a little rain the new jump got a bit softer. I got a kicker but managed to stay on the bike. The fourth lap I went for it again but chose a different rut, big mistake! I got a big kicker again and landed head first with the bike in my back. The result: two shattered vertebrae’s and a ruptured bowel. I had to get surgery on my back, they fixed 7 vertebrae’s together to keep it in all in place, this fixation will last a lifetime.

Here is the crash video. I’m lucky to say I’m alive. I bruised several organs and have small cuts on my face due the faceplant. I am still in a lot of pain but I have some good medication. Hope to see everybody quick back on track.

Gatedrop: At the time, how did it feel that you had to stop Motocross? Obviously you were a young rider with a very promising future and just like that, it’s gone!

Engelen: Of course I felt very disappointed and devastated. All the blood, sweat and tears seemed for nothing. Actually, in the beginning I really thought that I would get back on track. But after the weeks passed it became clear to me that it would no longer be possible.

Gatedrop: In 2014 that’s when you started to make a name for yourself in the Motocross GP paddock – eighth overall in the EMX125 championship, were you happy with that season?

Engelen: 2014 was the first year I raced in the colours of HSF. My goal was to finish in the top ten and I succeeded in that but no I was not happy with the end result. I showed speed that belonged in the top five of the EMX125 championship, due to arm-pump I was never able to maintain that speed during the whole race. That’s why I took the decision to get surgery for this at the end of that season.

Gatedrop: At Valkenswaard that year you got on the podium, third overall! Can you talk me through your races that day and how it felt to get on the podium in front of your home fans?

Engelen: Wow, Valkenswaard was crazy! For sure one of the best memories I have. It was a rainy weekend, therefore the circuit was very difficult. I had a really bad qualifying because of the big crashes. I think I had the 17th gate pick after qualifying. In the first heat on Sunday I got a bad start around 20th place, I worked my way upfront to 6th when I crashed. I finished the first heat in 8th place. In the second heat I took a much better start around 10th place. The track was very difficult and a few riders in front of me made small mistakes, so I could climb up to 5th. With just two laps to go I managed to get to the third place. I took 8th and 3rd for 3rd overall (laughs), that was quite something. 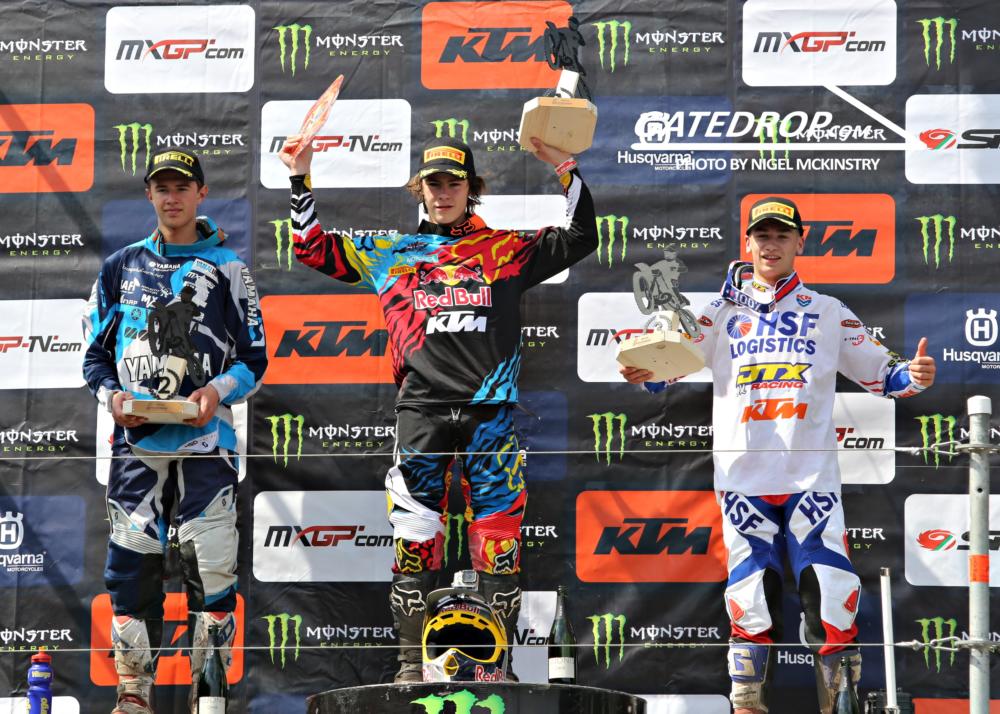 Engelen proudly stands on the podium at his home GP alongside Pootjes and Ostlund. Pic: Nigel McKinstry

Gatedrop: The year after you moved up to the EMX250 class – how did you find making the jump up to that class?

Engelen: I really loved it to ride the 250cc, I felt very comfortable on the bike. All the guys at the top ten of the EMX125 series also moved up to the EMX250 class. The EMX250 class already was a very strong and competitive class with many experienced riders. Overall I can say that I was happy to join the EMX250 class.

Gatedrop: It was a solid rookie season let’s say, the last round at Assen things clicked for you as you went seventh overall – you must have been happy with that race and to end the season on a high?

Engelen: My rookie season in the EMX250 went better then I had thought. The last round in Assen was good to end the season with. The track in Assen suited me all weekend and the atmosphere was amazing. In the second heat I managed to get the holeshot all way from the outside and I led the race for about six laps. The two riders past me in one lap. Riding in 3rd , I felt the warm breathe of Nick Kouwenberg in my back. We had a nice fight and hard fight when I crashed. A 7th place overall was a nice position to finish the season with. 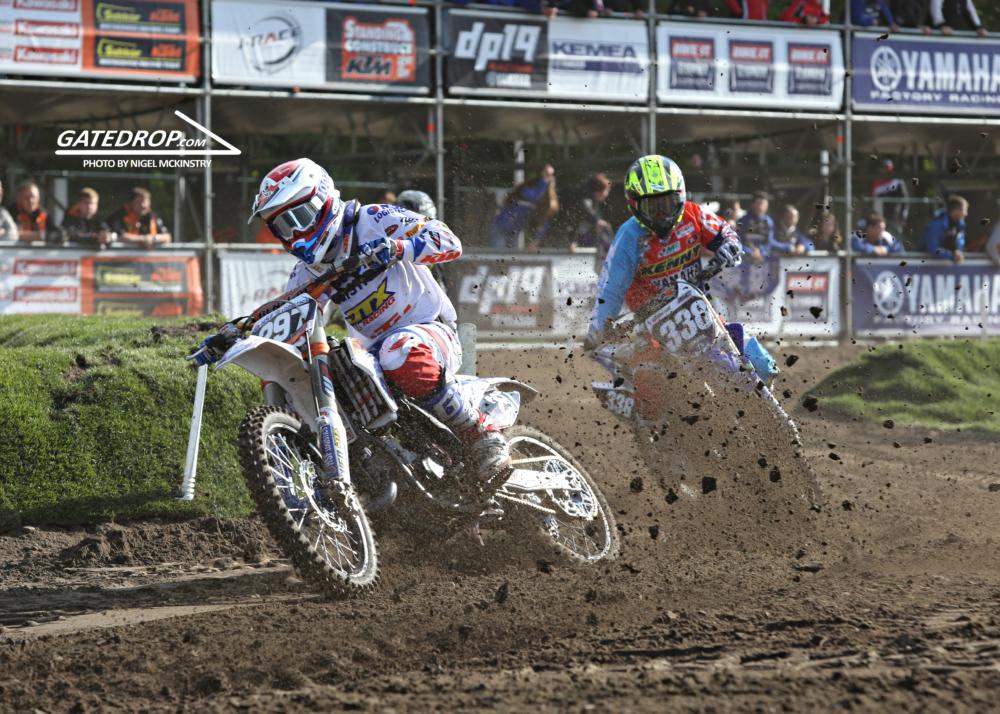 Gatedrop: Reflecting on your career, what other races/memories stand out for you?

Engelen: Now at the moment even all the bad memories stand out for me. Whenever I look back into my career, I know for sure that it was the best time of my life. If I have to choose one more memorable moment that has to be the Junior World Championship in Lierneux, Belgium 2014. Just to be selected for this race weekend was already a memory to never forget. Lierneux was a very difficult and technical track.

There was heavy rain over night before the qualifying. I was very nervous before free practice and I really rode sh*t laps. When qualifying practice started I was way more in Zen-mode. My first fast lap was good for third, after one more fast lap I was fastest on the track which resulted in the first gate pick on Sunday. In the first heat on Sunday I crashed the first lap and came back to I think it was 7th place. In the second heat I was in the 4th place before I had a big moment and shattered my left collarbone. But it was still a good weekend.

Gatedrop: You rode with the very professional HSF Logistics team, unfortunately no longer in the paddock but how was it being part of the team during your time as a rider?

Engelen: HSF-Logistics was a very professional team, I am still very thankful to have been a part of this team for three years. The riders, mechanics, manager and trainer were all very close to each other which resulted in a very good atmosphere. Most of the time we were together as a team during training’s and race weekends. The professionalism of the team was high, everything was always arranged perfectly. 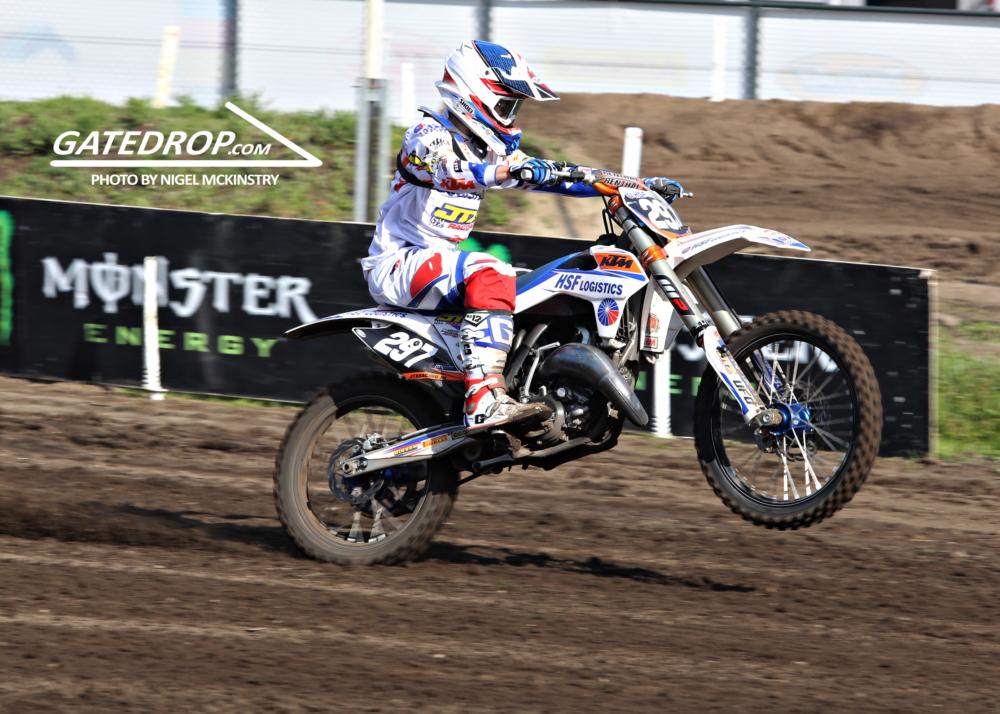 Gatedrop: You had a number of very fast team mates, who did you learn the most from and why?

Engelen: I really think that not just one rider taught me the most. I had a good relationship with everyone. Roberts Justs, Calvin Vlaanderen and Brian Bogers are all very different not just as riders but as people. We always did the motorcycle training together and I learned a lot from that. But also being the youngest, I was able to hang out with the older boys. This gave me different insights into different aspects of life.

Gatedrop: Are you still a Motocross fan, do you watch the GP’s or is it too hard to watch and as a result have you gone away from the sport?

Engelen: I am still a very big fan of the sport and I always will be. Motocross will always be around me but I still find it difficult to watch races in person. I watch them on television or online.

Gatedrop: Since quitting Motocross what have you been up too and what’s the future hold for you?

Engelen: After I quit motocross. I started a four-year course to get my bachelor’s degree in Business Administration (BBA). A few weeks ago I submitted my final thesis, hopefully this will be approved and then I’m finally graduated.

Gatedrop: If things ever get better with your back, is there a chance we’ll see you back racing/riding a Motocross bike?

Engelen: There is a chance that I will be back on the bike in the near future but then it will be just for fun. I will never be able to compete on the level I used to. Since the day I quit, I never rode a motocross bike again. Until a few weeks ago when I went on a training with Freek van der Vlist, and I couldn’t control myself again. Freek saw on my face that I wanted to ride so bad, this is when I said f**k it, let’s ride a few laps (laughs). The feeling I experienced was amazing, number 97 will be back on track someday.