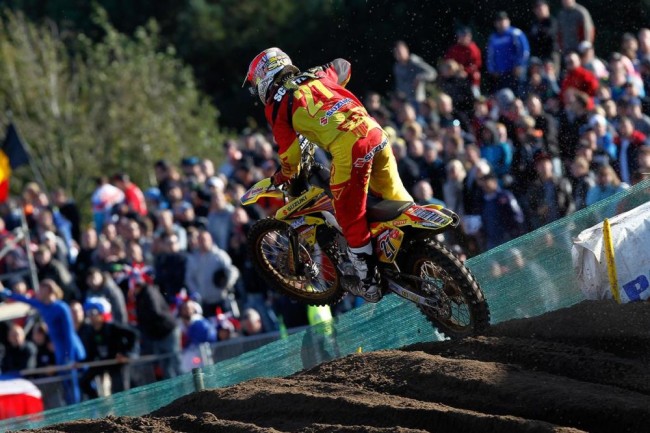 German rider, Marcus Schiffer has plenty of experience when it comes to racing as he was in the GP paddock for a number of years and had some great results along the way. One weekend he’ll never forget is the 2012 Motocross Des Nations when Germany shocked the world to win the event at Lommel with Schiffer as part of the team.

He might not be a racer anymore but he still rides regularly and has a role with the Sarholz KTM team (one of his former teams). Schiffer is still involved in the sport with a coaching role and is still a familiar face in the GP paddock.

We caught up with Schiffer to discuss his career and a range of topics.

Gatedrop: Marcus, the 2012 Motocross Des Nations, what a day it was for you and team Germany. Can you talk me through your races?

Schiffer: This was a really tough weekend with tough races ahead of us. Lommel is a very difficult track but actually we all felt comfortable at it, but you never know what happens here as the track conditions changes every lap.

As everyone knows I love to ride sandy tracks, so I was happy that the MXoN was in Lommel, this is kind of a home track for me. Three weeks before the Event I had a really bad crash at the MXGP in Faenza, Italy. But if you are nominated to race the Motocross of Nations you don’t think about the past, you just try your best for the Team and push as hard as possible. The Saturday was actually already pretty good for us, so we had a good starting position for the Sunday.

My first heat was awesome I wanted to save some power at the beginning but during the race I felt great so I start pushing really hard and was 7th place in the end. If I knew that I have power until the end I would have pushed from the beginning. The 7th place was a great effort in the end but I could have ended also on the 6th place, but we were all happy with this achievement.

I didn’t have so much time between my races, we needed to get the bike ready and I needed to relax a bit to find as much strength as possible for the 2nd race. Meanwhile Ken and Max rode a great race as well, everything went well. My 2nd race was not so good like my 1st, as I couldn’t push like in the first race. But this was no problem we could cross out my 14th place from the results. So, in the end we made the impossible possible for us and for Germany this time.

Gatedrop: Do you remember the feeling after the final race and finding out Germany won the event, how did that feel?

Schiffer: It was just incredible. You can’t believe it and you feel like you’re in a dream. After we were standing on the top of the podium, I felt so happy and all the pressure was gone and I was so proud of what we achieved in that moment. It was simply an amazing feeling to celebrate together with the crowd on that sunny weekend. Definitely one of the best moments in my Motocross Career and I am happy that I was a part of this success. 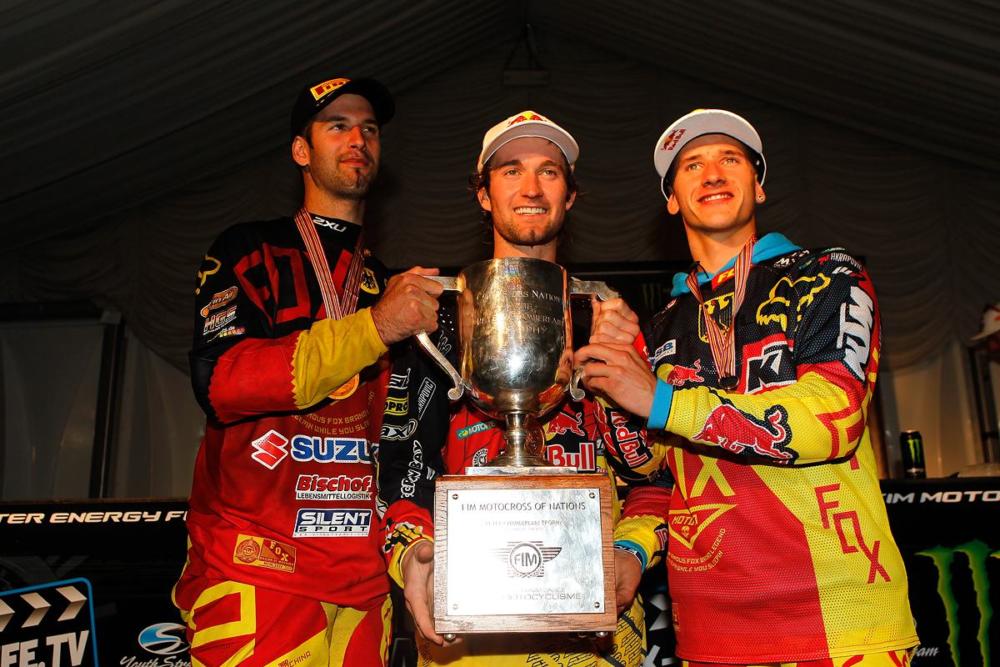 Gatedrop: You had only done 2-3 rounds of the MXGP World Championship that year, how did it feel to race at a high level again that weekend?

Schiffer: It is hard to know the speed from the other participants or to guess who is well trained or not if you haven’t raced much together with them, you can’t analyse the weaknesses of your competitors. It was a great feeling for me to see that I could definitely do the same speed as the others. But for sure if you don’t have the routine like the others it is always harder to guess at which level you personally are.

Gatedrop: The German’s aren’t supposed to be that good in sand, were you surprised Germany won that day? Do you remember if Roczen or Nagl even expected to win?

Schiffer: Our goal was the podium because we know each other for a long time now and everybody knows the the weak and the strong points from the other person. We knew that Lommel is okay for all three of us and we were on the podium two years before, same constellation at the MXoN in Colorado. So, we knew at least there is a possibility to be on the podium again. I grew up on sand tracks, Max Nagl lives near Lommel and Ken Roczen always rides good so we knew with a little bit of luck as well, the weekend can have a good outcome for us. In the end it paid off, we worked great together as a team and made the miracle come true. 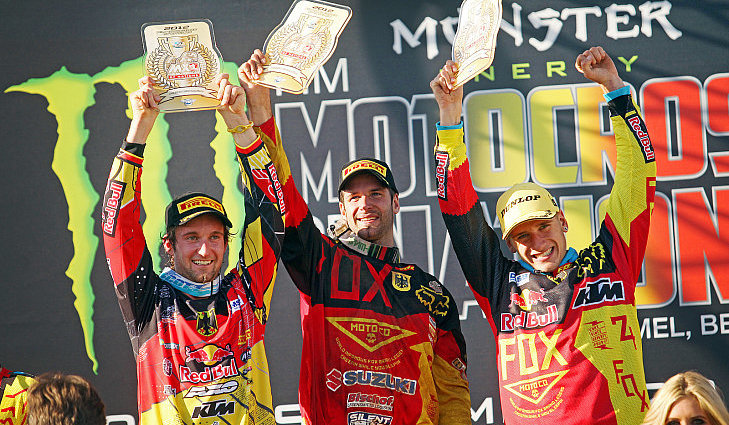 Gatedrop: You went 7-14 that day in the two moto’s, were you happy with those results at such a tough Lommel track?

Schiffer: I was really happy with my results, as I didn’t race so much GP races and as I mentioned already I had a bad crash three weeks before the MXoN and lost the feeling in my body for some minutes. I was happy that I could do that special race and even happier to finish with great results and with the overall win together with the team. This weekend stays in my mind forever and I am thankful that I was a part of this historical moment.

Gatedrop: Blake Baggett that day described the track as his worst nightmare, how would you describe the track that particular day?

Schiffer: Well, the track was pretty rough to be honest but for me it was not that bad because I grew up with sand riding and I am a more technical rider, which means I am pretty good a seeing different lines. So, sometimes not the speed is what counts the most, you have to read the track and the lines, and some can do better, some not. 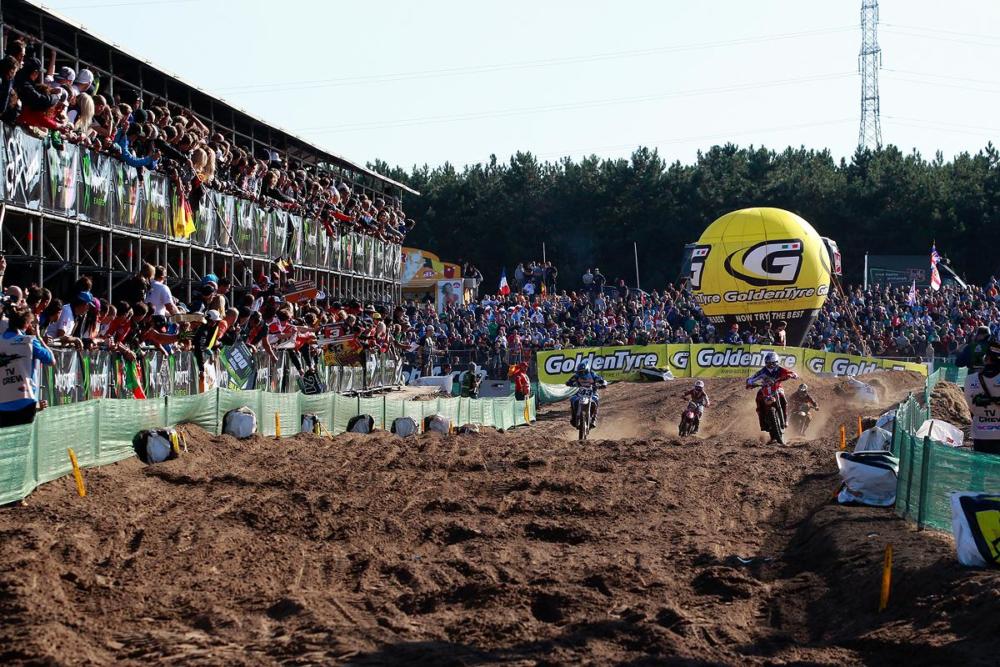 Gatedrop: Looking back at your GP career, you were a solid GP rider, are you happy with what you achieved in the sport?

Schiffer: I can definitely answer this with a yes. I had the chance to turn my passion into my job which is a great gift in life. I had a great time of course with ups and downs and some bad injuries but in the end, I also celebrated some successes which I am really proud of.

Of course, I also made some decisions which I wouldn’t do again now, but you can’t turn back time and I can give the experiences I’ve made during my career to the people I train now. That makes me happy too when others participate from my knowledge I gain over the past years.

I am happy that I overcome all the injuries I had in my career quite good. I needed to quit with racing and give my body the time it needed to recover, I can walk around and can ride still just for fun. I often look back and love to remind myself of this time because I was a real racer but there are new opportunities ahead of me and I love what I do now.

Gatedrop: Looking back what races stand out and have you got fund memories of and why?

Schiffer: It was Namur in 2007, this was the best race I’ve ever ridden. I loved the track because it was technical and as I said already, I love challenging tracks. I started the races from one of the last positions which was actually a bad thing to start but I’ve rode the best lines and could finish as 3rd and 8th in the races.

I was the only one who was jumping the step down and the crowd was so surprised that they were supporting me on every corner. This was an amazing feeling and the perfect race for me even if I didn’t win but my riding was outstanding during that weekend.

Gatedrop: You’re still a regular in the GP paddock, what’s your role now? I believe a coach for Sarholz KTM? How is all that going?

Schiffer: I am working for KTM Sarholz to support the team with my experience and as trainer for the riders. Besides that I also train other riders from the amateur championships for example and give different groups and motocross clubs the chance to train with me.

If riders want, I also create a plan for the preparation during the winter period and go with them to Italy and Spain to prepare them for the upcoming season. If somebody wants to go with me to the USA no problem as well, I know how it works there as well.