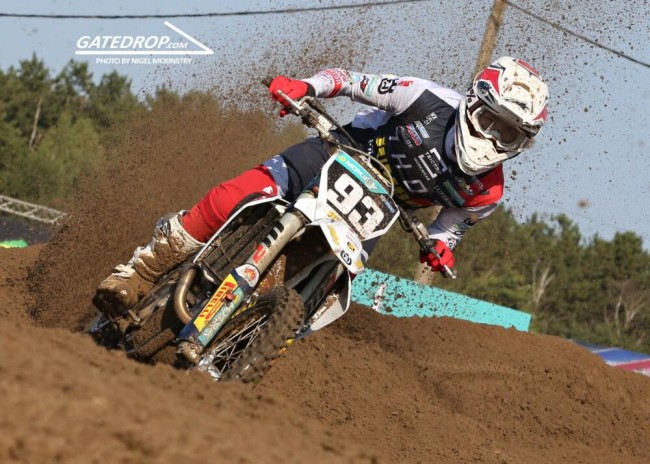 The Coenen brothers look to be hot on the heels of the Lawrence brothers in setting their sights on taking America by storm. But right now, at just 15, they are setting the EMX250 series alight and in Lommel Lucas Coenen showed his skills in the deep sand to go 1-1 and win race two by over 40 seconds in an impressive display of sand riding.

We spoke to Lucas, who speaks perfect English already, to get his thoughts on the day as well as the plan to race MX2 then go to America. (You can get Andy McKinstry’s interview with twin Sacha here)

EMX250 winner, you dominated that last moto and made it look pretty easy – but I’m sure in the heat it wasn’t even though you had a 40 second lead at one point

Yeah, it was a good moto for me. The first moto was a bit difficult because I took not the best start and had a good battle with Rick Elzinga and Andrea Bonacorsi. He was pushing hard and I passed him but it was a tough moto. The second moto was good, I took a good start and passed quickly so yeah, I finished the race with a lot of seconds ahead of the guys but for me it was not difficult because I was alone when i was riding, I had energy at the end so that was good.

You had a really flow, and were jumping some braking bumps I didn’t see anyone else do coming into that tight left hander before pitlane. You were doing a lot of things on the track and that flow I guess made it a bit easier for you?

Are you able to learn form being on the track with him?

Yeah it’s when you look on instagram or see his videos sometimes, it’s like he said, it’s like supercross for him you know? It’s nice to see.

This season you have been impressive on the 250, just like last year when you came on strong on the 125, it doesn’t take you long getting adapted to these different classes

Yeah, for me no. Only the first race when I had two DNF because I was stressed becuase we only did one race. The second race I took a podium and we had some technical problems in Ernee and some others but now it’s going to be good I think until the end of the season and we going to do our best.

I was talking to your dad and I believe next year you are going MX2, are you looking forward to going there full time?

Yeah, normally we do MX2 next year, that will be good because now we just make one in Loket for learning. The results were not there but that’s not….the speed was good but the results don’t show it. But yeah, next year will be MX2 and it will be fun.

And beyond that, I believe both of you are looking to go to America sooner rather than later, is that because of supercross or do you prefer supercross to outdoor? What’s the reason?

Yeah we see, we are going to try to do our best and then we will see where we end up.

And you could be like the Lawrence brothers – it could be the Coenen brothers in a couple of years in America!