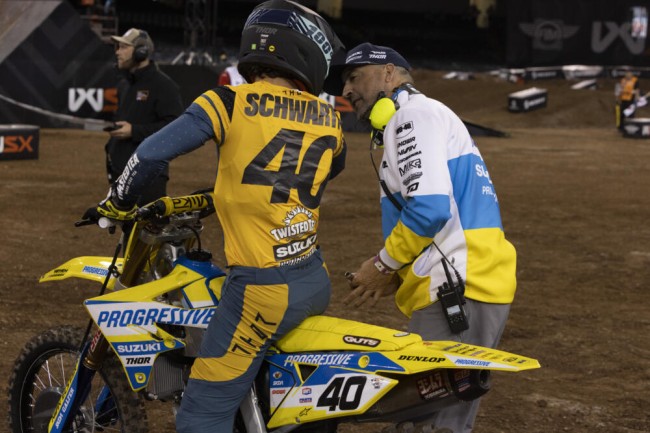 We discussed the WSX event with Schwartz and much more.

GateDrop: Just on WSX, this is the first time they’ve ran this event. What was your thoughts on how they ran it and the Championship in general?

Schwartz: It surprisingly went pretty smoothly. There wasn’t really any issues with how things were ran and everything seemed to go to plan as far as their part.

GateDrop: Can you talk me through your main events? It is crazy out there with starts being so important because the races are so short…

GateDrop: What was your thoughts on the format? I know they do it in Australia, but have you ever experienced it and what did you think about it?

Schwartz: I think it would definitely be better if they did an SX2 main and then the WSX class main kind of thing. Instead of all just one classes because we’d get a little bit of a break then. But I mean it worked out and it is what it is.

GateDrop: Have you ever been to the UK before and what’s your thoughts on Cardiff?

Schwartz: It is pretty cool here. Everyone speaks English so the only difference really is the money so it has been easy. It has been cool walking around and going to all the restaurants and stuff like that.

GateDrop: What was your thoughts on the track?

Schwartz: The track was alright. I mean it was pretty simple and I think it was one more lined than anything. I was kind of surprised because I thought it was going to more tamed down, but it was pretty peaky and close together. Overall, it wasn’t bad, it made the racing really tight. There wasn’t a lot of passing but it was there first go and as far as first goes, I think it was good.

GateDrop: Just on WSX, are you keen to come back and race it again next year or is it still up in the air?

Schwartz: It is still up in the air right now.

GateDrop: At the moment what are your plans for next year? For me I would say you are probably a better Motocross rider than Supercross. It would be cool to see you in Europe to do some Motocross races, would that be something you’d be interested in?

Schwartz: I definitely won’t be coming to Europe to do Motocross. I’ll be staying in America but maybe if this series takes off, I will do this and then race in America as well. I just think, going to Europe, it kind of just ends your career. I am just trying to get better at Supercross, I practice it good I just need to do what I do in practice at the race, and we will be alright. I just need some more experience, but I think doing this will help in America too as it gets more gate time in. Racing hard with these guys and obviously it was crazy out there with a lot of rubbing but I think it will help me out overall. I look forward to riding American Supercross next year.