Interview: Justin Bogle on being back on a 250cc and Cardiff WSX 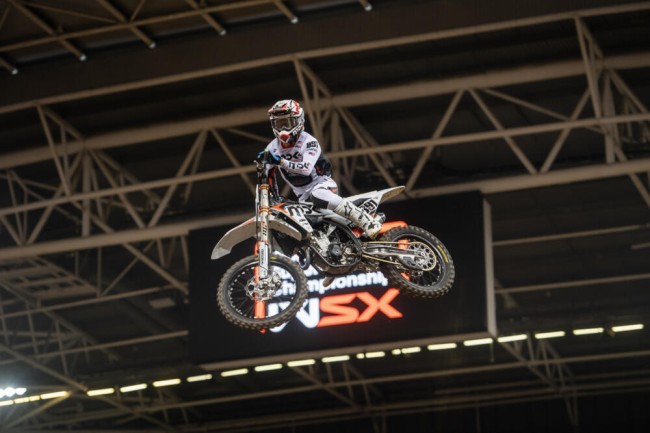 When it came to the main events, Justin Bogle didn’t have the best of luck but it was nice to see him back racing a 250cc again – you could see he was having fun and looked right at home on the bike.

The WSX series is also the perfect opportunity for someone like Bogle to continue his racing career and get to travel the world doing what he loves.

We caught up with Bogle to discuss his weekend in Cardiff.

GateDrop: Justin, that is the first WSX in the books, very unique event and it’s just chaos. Can you talk me through the event?

Bogle: It is absolute chaos. It was good fun but I had a rough night, I had two flat tires tonight. In the first main event, I had a bad start and was coming through the pack nicely riding really good. I got a flat right before the finish line so had to pull out. Two times today I had really big nails in my tire, so we have to do something about that, it is pretty dangerous. In the second main event, I crashed in the first turn – I did in one of them anyway, there’s so much to remember (laughs). I holeshot and won a heat race so that was nice, that was the easiest part of the whole day. It was really hard to pass tonight and then in the third main I worked my way through to third trying to make something happen and went down at the end. It was a pretty shi**y day to be honest but it’s alright, we had fun!

GateDrop: A start is so so important out there, we saw that with Anstie who won one and then nowhere in the other two with bad starts…

Bogle: If you don’t get a good start out there you are absolutely not coming through. I mean I think I was one of the fastest guys out there tonight or at least in that third main but I just couldn’t make anything happened. I battled with Moss for I don’t know, four or five laps, I just couldn’t get around him. I struggled and not too fun but meh, it’s alright man, we are racing and it’s all good.

GateDrop: Just on the format, have you done anything like that before and what was your thoughts on it? For the fans I think it is pretty good although if they did SX2 then WSX it could allow for another couple of laps for each race and then you guys would get a break in between…

Bogle: I think if they flip flopped them it would be better. That was pretty hectic, it’s not even enough time to get goggles and have a glass of water. I sweat more than most and I never even changed my gloves because I didn’t have time. It’s work in progress and we are all learning.

GateDrop: What’s it like being back on the 250cc, I think it suits your style perfectly and you seemed to be having fun out there? You even through a couple of nac nac’s I noticed yesterday…

Bogle: I really enjoy the 250cc in Supercross. Like you said, I think I ride it better and I think it suits my style better in Supercross. You can ride it a little bit harder and still be in control of the bike instead of the bike taking over from what you do. I’m happy and having a good time riding the 250cc, I was really happy to get this opportunity to get back on the little bike. I am having fun and feeling really good considering I’ve only done about 4 days riding on it in Supercross in the last seven years. A couple more days next week and then we’ll take a weeklong trip over to Australia.

GateDrop: What’s your thoughts on the WSX series? I think for you it’s perfect because you didn’t finish the AMA National series and I am not even sure if you have anything for the AMA Supercross season so without this series coming along who knows what you’d be doing right now…

Bogle: It is really cool. I am grateful for this series and this opportunity because it’s a really good opportunity for guys like myself like you said. I think for me having something to still having that competitive fire, scratch that itch, get to go racing having a goal to work towards and all of that, it’s really fun. It’s a cool environment to go to different places and see different things. Being in front of different people and there’s a lot of fans here tonight and they are all really excited. It’s cool to see and also cool to see how excited they got for their own riders too. When they announced Max for the opening ceremonies that was cool. I hope Americans have that energy when we go there next year.

GateDrop: What was your thoughts on the track? The last time I seen you race was Paris Supercross last year which wasn’t too technical but I think this was a lot closer to a basic AMA SX track…

Bogle: I mean it was a legit track. It was just really one lined and the dirt being harder made it more difficult because there wasn’t many lines. We were pretty much skating the inside every corner because there wasn’t really anywhere else to go. I think for the first one it was awesome man. Legit track, legit whoops, legit rhythm sections and I enjoyed it.

Bogle: I don’t know. I am definitely all in on doing this year next year too.

GateDrop: You have a deal for next year already for this then?

Bogle: Yep, same guys I will be doing it with. I am really excited about that and don’t have to worry about a job. I can do my thing but we will figure it out how we go. I don’t have any plans for the AMA Supercross season right now but we will see.

GateDrop: Finally, what is it like being in the UK? Next year you will get to travel to different countries, is that something you are looking forward to?

Bogle: It’s exciting. I’ve wanted to come over to the UK for a while. My wife is actually from over here, so I am pumped to go over there and see what is going on. I have done oversea races like Bercy in France and in Italy but to do a full series is just a different deal. It’s cool.