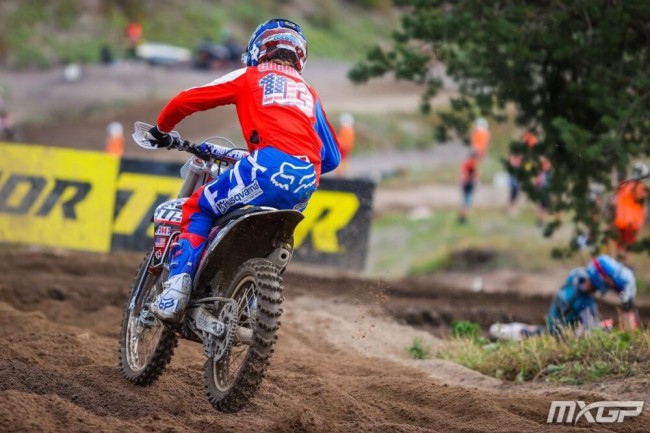 America were back contesting the Junior World Championship this year and it went well for them winning the Nations classification in Finland. Despite the European riders being more comfortable in the sand and winning the Individual awards, America had a strong presence in all three classes which made the difference.

Casey Cochran represented America in the 125cc class and finished a respectable fourth overall racing against the likes of Van Erp, Valk and the Reisulis brothers.

We caught up with Cochran to discuss the event and more.

GateDrop: Casey, you raced the Junior World Championship at the weekend. First of all, what was your thoughts on the way the format was run and the two day format? Similar to a GP but just no qualifying race on the Saturday…

Cochran: I thought it was really neat. It was a super cool program for amateurs to have a chance to run a GP like schedule. I think the US could take note and do this at some of our events.

GateDrop: Did you like having the two days to learn the track and adapt – did you change the bike much to what you had coming into the weekend?

Cochran: I really only had one day to learn the track with the free practice and qualifying session on Saturday. Big changes to the setup from what we had at the US Nationals. It was much different track conditions. We ended to changing everything from sag to fork height plus some clicker adjustments.

GateDrop: USA won the Nations classification – that must have felt amazing to win the event for your country?

Cochran: It was super cool, because honestly after everyone had finished I didn’t think we did enough to win, but thankfully it was. I am proud of the consistency we showed across all three classes. Our second moto rides was what made the difference. It was a true team effort.

GateDrop: Just on the track, what were your thoughts on it? It looked rough with not too much track prep done throughout the weekend! Have you raced many rougher tracks in America?

Cochran: The track was very different from anything I have ever ridden before. I can confidently say that it was one of the roughest tracks I have ever be on. The way it developed was gnarly. The huge bumps with the square edged faces made it super challenging.

GateDrop: You got two good starts which was good – where you happy with your riding and results against the best in Europe?

Cochran: The first moto I was a bit disappointed after starting up front. We made some significant setup changes to the bike plus I feel I was still learning the track and how it developed. Moto two, wasn’t as good of a start but I made some passes and was proud to stay in touch with the leaders. Much happier overall. I truly feel if this had if been a three moto format, like the US Nationals, I could have competed for a moto win.

GateDrop: What’s your thoughts on the level in Europe and the speed of the likes of Van Erp/Reisulis/Valk?

Cochran: All three are gnarly riders and a huge amount of respect for those guys. They impressed me for sure and I look forward to the next I get to compete against them.

Cochran: Yes, Finland was my last 125cc race. I have ridden the 250cc a little but I am super excited to get on it full time. Mini O’s in November will probably be my debut race on the 250cc.

GateDrop: Would you be interested in racing any EMX races whether that be EMX125 or EMX250 in 2023? It would be a great learning curve!

Cochran: Most definitely! I would love to go back to Europe and compete in some of the EMX250 events. I think it could be great experience for my career. We had the opportunity to meet a few of people and make a few contacts. Hopefully we can set something up in the spring.