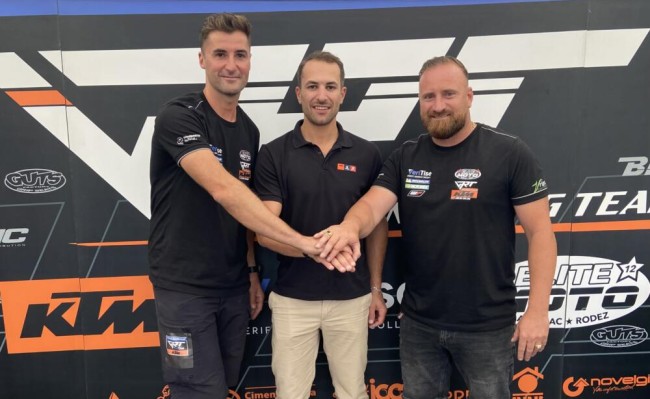 KTM Motorsports have strengthened an ongoing association with prominent European Championship motocross team, Team VRT KTM, to revitalise the junior talent development scheme in the sport. The French crew will field two riders in the EMX250 division in 2023 and 2024 and will become the ‘VRT KTM Factory Juniors Team’ with official backing.

Team VRT KTM, based south of Nantes and not too far from Grand Prix venue St Jean d’Angely, will further integrate into the KTM motocross racing structure for the next two seasons. KTM wish to re-establish the funnel of promising youngsters from the junior championship categories and a system of ‘spotting’ and development that helped the likes of Jeffrey Herlings, Jordi Tixier, Pauls Jonass, Jorge Prado, Rene Hofer and many others reach the higher echelons of the sport and even the status of Grand Prix winner and world champion.

VRT KTM have been working with junior riders and running KTM SX equipment (in both EMX250 and EMX125 divisions) for six years and are now solidifying the link with the racing HQ in Munderfing, Austria. Former MX and Enduro world champion Pela Renet is the Team Manager of the squad.

The project will officially begin with the 2023 EMX250 European Championship: the last stepping-stone for under-23-year-old racers before they move into the FIM Motocross World Championship and the MX2 class. The two representatives that will steer the KTM 250 SX-Fs have yet to be confirmed and will be announced in due course.

Diego Clement, Manager Offroad Commercial: “It gives us great pleasure to make this declaration of intent together with Team VRT KTM. We have had one of the strongest policies in terms of helping emerging riders at a young age and then providing a path or a structure for them to progress and to try and reach their sporting goals. We really want to continue this tradition, and when we look back on some of the names that we were able to guide over the years then this is a source of pride for us. It’s great we were able to play a part in these careers. It’s time to push on again and look for our new Herlings, Prados and Vialles of the future and I hope with Team VRT KTM we can lay some promising bricks in that direction.”

Mickaël Vrignon, Team VRT KTM Team Owner: “We’re glad to make this change and be the VRT KTM Factory Juniors Team for at least the next two seasons. It was important for us to continue our relationship with KTM but this is another level and we’re proud to be the ones that could give riders that last push and potentially make the Red Bull KTM Factory Racing team in the future.”