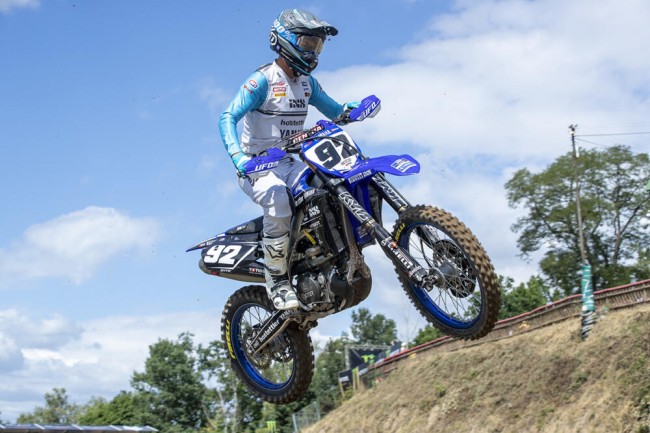 Excitement buzzed around the iXS hostettler Yamaha tent at the thirteenth stop of the 2022 FIM Motocross World Championship, the Grand Prix of Czech Republic. Valentin Guillod returned for another go at chasing on the world stage and was joined in the premier division by Kevin Brumann, who was making his premier-class debut aboard a YZ450F.

The weekend started with a real bang for Valentin Guillod, who had the third-quickest time in free practice and reminded everyone what he is capable of. Although the result was not quite as strong in the first moto, the ride was incredibly impressive. ’92’ was twenty-fifth on lap one and clawed his way to thirteenth by the time that the chequered flag waved. What a ride! The second moto was just as incredible, as he started in the top ten and stayed there for the duration. Ninth was secured in the stint, which put him in tenth in the overall classification.

Jumping into the premier class is no easy task, but Brumann excelled and proved why making such a change was the correct decision. Starting twenty-fourth in moto one, after a so-so start, he advanced to nineteenth at the finish line and secured points in his first attempt aboard the YZ450F! The same result was secured in the second moto, as Brumann started in sixteenth place and crossed the finish line in nineteenth. 19-19 scores put him twenty-second in the overall classification.

The hard-pack tyre has been shelved now – the scoop will be required for this weekend’s Grand Prix in the bottomless sand of Lommel. The Grand Prix of Flanders will host round fourteen of the current term.

Valentin Guillod: “It was a very positive weekend! I was feeling so good on the track from the start of the weekend. I made a very, very bad start in the first moto and came back to P13. It wasn’t great on paper, but the riding was nice. I was around tenth place at the start of moto two and finished ninth. I used a lot of energy in the first race, but still salvaged a good result in that second one. I think I had the speed to be higher than that.”

Kevin Brumann: “Thanks to the team for giving me the opportunity to step into the MXGP class! It was a good day of racing. I learnt a lot and took a couple of points home too, which was my goal in my YZ450F debut. Now let’s see what we can do at the upcoming races.”