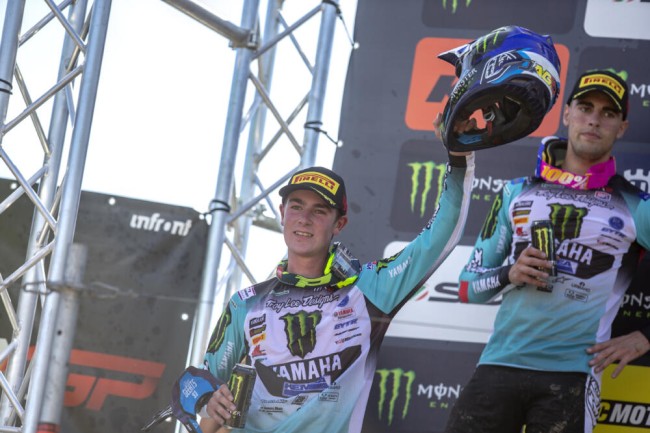 Round 13 of the FIM World Championship, in Czech Republic, turned out to be a great triump for the Monster Energy Yamaha Factory MX2 Team. Jago Geerts won the Grand Prix and recaptured the red plate. Thibault Benistant – who won the first race – finished second.

After a three week break the FIM World Championship resumed at Loket, a picturesque village in the Czech Republic which became famous by the James Bond movie Casino Royal in 2006. No 007 in Loket this weekend, but the 25th edition of the MXGP of Czech Republic.
Both Monster Energy Yamaha Factory MX2 riders felt well on the the hilly, hard pack track on Saturday. Thibault Benistant grabbed his second pole position of the season, while Jago Geerts finished third.

Holeshot
Benistant took a blistering start on his YZ250FM in the first race. The Frenchman grabbed the holeshot in front of Längenfelder and Rubini. Geerts was only eighth in the first corner, but quickly moved up to fourth place.
Benistant was on fire. Längenfelder tried to hold on, but half way through the race the German had to acknowledge his superior in a splendid Benistant. The former European champion was in a league on his own until the checkered flag. Meanwhile, Geerts got stuck behind Rubini. It took the Belgian eight laps to pass the French rider for third.
Another holeshot – this time Geerts – for the Monster Energy Yamaha Factory MX2 Team in race 2. Although, Jago soon had to give up the lead to Vialle, who slipped through in the first lap. The Belgian remained calm and stayed within striking distance of his title rival. Benistant, who was only eighth in the first turn, had to work hard to come back to the front. After two laps Thibault was already in fifth place.

A cool head
Meanwhile, Geerts kept pushing which resulted in a mistake by Vialle, who hit the bank. Jago took over the lead and managed to make a small gap. But Vialle refused to go down without a fight and was all over Jago’s back in the final lap. The Belgian kept a cool head and took the race and GP-win. Beninstant also managed to get past Horgmo into fourth place in the final phase of the race, which meant a first and second place for the Monster Energy Yamaha Factory MX2 Team. Only the second time this year, after Teutschenthal. Another nice bonus: Geerts will travel to his home GP in Lommel, next weekend, with the red plate. The Belgian is now leading the championship by eight points.

“Finally, a win again. It has been a while, since Maggiora. This feels great. Race 1 was difficult. I was riding too cautious and couldn’t find a good rhythm. I got stuck behind Rubini for a long time and adapted to his pace. Finally, I managed to pass him for third place. We changed some small things on the bike before the start of the second race. And it worked! I grabbed the holeshot. My first this season. Vialle passed me pretty quickly, but I clung to him. When he made a mistake, I struck immediately. It’s nice to have the red plate back. Especially with the GP in Lommel ahead.”

“Two completely different days in Loket. On Saturday I felt really comfortable on the bike and the track, which resulted in a win in the qualifying race. I also won the first race on Sunday, but I must admit that I didn’t feel great. I was really struggling to find a good rhythm. Luckily, I had a super start which helped me a lot. Unfortunately, I didn’t get a good start in the second race. I had to fight back, I had to push. Not easy when you don’t have a good feeling. Still, I managed to finish fourth. I didn’t feel at ease on this track today, but finished second overall. All in all not a bad result.”