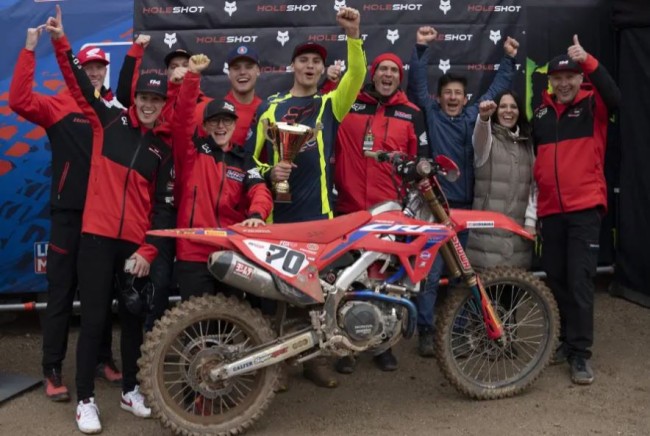 The FIM World Motocross Championship visited the Baltic state of Latvia today and as always the fast and challenging Zelta Zirgs circuit near Kegums produced some exciting and spectacular motocross racing.

In the MXGP class Team HRC’s Tim Gajser took his time adapt to the sandy but firm track conditions. The Slovenian finished Saturday’s qualifying race in third place after a momentary off-track excursion, but Gajser still had a competitive start gate position for Sunday’s races.

Tim took a good start in race one rounding lap one in third position. Showing maturity and composure the four-time World Champion eventually moved into second place on lap 10 and then took the lead on lap 11 to win the race, adding 25 points to his MXGP account.

Rubén Fernández had a great ride in moto one, sitting in fourth place for almost the entire race, but crossed the finish line in third to take 20 points, equalling his best MXGP race finish so far in Argentina, back in March this year.

Team JM Honda Racing’s Henry Jacobi also raced hard until the last lap in moto one to finish in a worthy 10th place.

In race two Gajser charged his CRF450R into second place on lap one. Again the 25-year-old showed patience and control as the moto unfolded, this time taking the race-lead close to the halfway stage and going on to win by almost six seconds. Tim now leads the MXGP World Championship by 66 points after six rounds with 14 GPs remaining in the Championship.

Spaniard Rubén Fernández finished race two in fourth place and was rewarded with his first ever MXGP overall podium, joining Gajser in jubilant celebration and underlining the competitiveness of the Honda CRF450R.

In the MX2 class Håkon Fredriksen took his Honda 114 Motorsport’s CRF250R to a hard-won eighth place in moto one after rounding lap one back in 18th.

Race two saw the young Norwegian rider get a better start and begin lap one in eighth place. He made his way up to seventh on lap six, eventually finishing the race in eighth, taking seventh overall and 26 World Championship points.

Shiptocycle Honda SR Motoblouz’s Stephen Rubini had a very tough weekend with 16th in race one and a DNF in race two. The Frenchman hopes to put this result behind him and focus on bouncing back to his normal top-ten MX2 finishes.

The start-gate will drop once again for the MXGP of Italy at Maggiora Park in two weeks time.

Tim Gajser 243
Team HRC
I am really happy with how this weekend went. It wasn’t easy today as the track was a lot sketchier due to the rain, but I stayed patient in both races and made the passes when I needed to. I was also able to get two good starts on my Honda CRF450R, which I knew would be important, so that was good and that allowed me to not have to fight through the field. Everything is going really well right now and I’d like to thank all of Team HRC and all the fans online, and who come out to the races to cheer me on. It is great riding in front of passionate supporters and I really appreciate the atmosphere everyone creates for us riders to perform in.

Mitch Evans 43
Team HRC
Unfortunately, the first couple of corners let me down in both races as I was involved in a crash in race one, and then I stalled the bike in race two. This meant I was starting the races from right at the back of the field and it made things extremely difficult. However, I was pleased with my lap-times in race one early on, matching the guys at the front of the race and in then in race two I made a lot of passes as well to get near the top 10. They aren’t the overall scores I want, but I’m trying to take the positives from the weekend and I hope that I’ll be able to put in better results at the next round in Maggiora.

Rubén Fernández 70
Honda 114 Motorsports
The qualifying race was going well for me. I was in fourth place and then made a little mistake as my right foot slipped off the foot-peg, so I couldn’t use the rear brake and hit the tough-blocks. This dropped to ninth place. I made it back to sixth which I was quite happy with.
I managed to get two good starts today. I think I could have got the holeshot in the first race but I ran a little wide in the first turn and lost the chance.
I tried hard to stay mistake-free in the races and it worked out well. We knew we had the speed, but we needed to put it all together and I was really focused on that for this weekend.
It was a shame in the second moto that I was passed in the last few metres and lost third position by such a small amount. I will lean from that. I’m normally the one to be push to the end to make passes – and not the other way around. I’m happy to have been on the podium today though.

Håkon Fredriksen 427
Honda 114 Motorsports
We struggled quite a lot in qualifying and tried hard to find the best setup for my CRF250R and the track. I qualified in 17th place and this made the races much harder as I had 17th pick on the start-gate.
We spoke on Saturday night and agreed the way forward for our setup and mindset for the races and already in the warmup practice I was feeling great. I was hoping for a lot of rain today. We got some, but not too much.
In the first moto I think I reacted too quickly to the rider next to me and I hit the gate and was a little stuck. I worked my way up from dead-last and I had a solid pace throughout the moto and managed to finish the race in eighth.
In the second moto I pushed hard through the first few corners and made it into the top-ten and then eventually made it up to eighth.
Since Argentina I’ve not had the best results, but I’m now hoping I’ve reached a turning point and I can build from here.

Gordon Crockard
Honda Motor Co. Ltd
A milestone day today for our young talent Rubén Fernández in MXGP by taking his first podium, which has been demonstrated as possible during the recent rounds but finally reached today. A great achievement in his rookie year on the CRF450R.
Tim scoring a double victory stamped his opposition into the ground a little bit further into thinking they have no chance to beat him. A pleasure to watch.
Henry Jacobi was on the top ten pack pace more than I’ve seen before and he was denied a better overall placing due to a crash putting him out of 9th in the first half of race two, but still a delight to see his pace improved.
Mitch Evans had start issues but had fast pace, having to push through the traffic hard each time.
In MX2 Håkon Fredriksen made tremendous results from terrible starts, placing eighth in both motos from two disastrous starts.
We go to what will be hopefully better weather conditions in Italy in a couple of weeks and our injured men can hope for a good recovery to give themselves a better chance of showing their true potential.