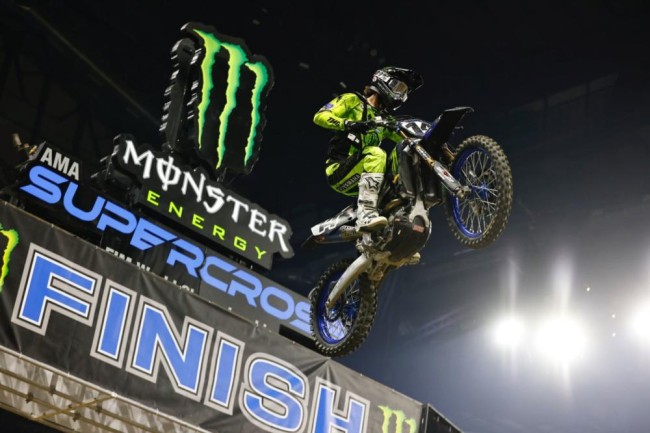 The Star Racing Yamaha squad on their night in Indy:

Jeremy Coker – 450 team manager : It was kind of a roller coast day. It was definitely a tough track. Once again, not a great racetrack with a short lap time again. It didn’t really gel with us here in the beginning. We made some really good adjustments to help the bikes towards the end. Other than when Dylan went off the track in the Main Event, he was riding a great race up front and had a podium. Aaron made a couple of mistakes, but I think he could have been right up there and was coming from the back. Malcolm just had an unfortunate event at the start. Other than that, all in all, I think there were some positives to take away. We made improvements throughout the day. Luckily, we have two more races here to show what we’ve got.”

Dylan Ferrandis (6th): “I had a good Heat race. I fought with (Eli) Tomac and finished fourth. In the Main Event, I had a good start and battled up front. It was good to be back in front because my last race in Houston wasn’t that good. I gave everything I had. I was in fourth fighting with Adam (Cianciarulo) for the podium and on the big double with the ruts, I got unbalanced a little bit and jumped on the side of the track. I had to go all around the corner outside of the track, so I lost a lot of time and some positions. I came back and finished sixth. It’s not great to be sixth but it was good to have a good pace, ride up front and fight for a podium. We’re going to learn from that and try to improve for our next race Tuesday.”

Aaron Plessinger (9th): “ It was a pretty good day overall. I started off free practice going really good and then come first qualifying practice, I tried to change the bike, which wasn’t really the right move. I just didn’t ride as well as I did in the free practice; the same with the second qualifying practice. In the Heat race, I got a bad start and then made a bunch of mistakes. I was coming through the pack and was one of the fastest guys, but you can’t do much with mistakes at the start. I need to minimize that.

“In the Main Event, I got a good jump and then got ran into which pulled me back a little bit. Then Malcolm crashed in front of us and made me and Marvin (Musquin) go off the track. I ran alongside the hay bales for a little bit and then jumped back on. I came back to ninth, which is not bad considering the start but it’s not where I want to be. It doesn’t showcase how good the bike is working this year and how good I’m feeling this year. I’d like to come back and get a better start and try to put this thing up on the podium. The track was really, really rutted and really rough. I’m looking forward to that again on Tuesday.”

Malcolm Stewart (11th): It was tough, honestly. I felt like riders were going down left and right. It was one of those tracks where I think if you just stayed up, honestly, I felt like your results came. It was a very tough track to push. It got to a point I think in the race we were riding against the track instead of each other. But Indy always throws curveballs at us. I feel like the next round won’t be as soft. For us, we just need to go out there and regroup and put ourselves back in a good fighting position. Definitely, 11th is not the way I wanted it, but on a bad night to come back from last to 11th on a tough track, I can vouch for it and take it as a positive.”

Wil Hahn 250 team manager : “It was another great night for Colt. He rode a great race and led start-to-finish. Christian was running second and then came together with Jett (Lawrence) before the whoops and both went down and lost positions. It’s unfortunate to miss out on another double podium, but it was still a positive night. I’m very happy for Colt and his performance. We’ll come back on Tuesday and look to top the podium again with both guys.”

Colt Nichols (1st): “It was just drama-free, which is just the way I like it. I finally got off the gate really well and controlled the inside on the first turn, which is something that was pretty key tonight. I really just tried to put in my laps, and once I got a big enough gap I could kind of see where Christian was, and also (Michael) Mosiman and Jett (Lawrence). I was keeping tabs on everybody just so I knew if I needed to pick it up or whatever I needed to do. It was really just about managing the lappers. We got into them pretty thick again tonight. Overall, I felt like I just rode really well and was able to do my own thing. I did not have to be in a battle like I was in the first three rounds. So that felt pretty nice.”

Christian Craig (5th): “The day started off well in Indy and I was feeling good with the track. I won my heat race and went into the Main confident. I started second behind my teammate and was able to latch onto him for a bit, but once we got into lappers he got away. I made some crucial mistakes towards the end of the race and with two corners left I hooked bars with another rider and we both went down. I ended up fifth, unfortunately. I’m looking forward to Indy 2 on Tuesday for some redemption!”