Ken Roczen on his win – I’ve just had huge motivation! 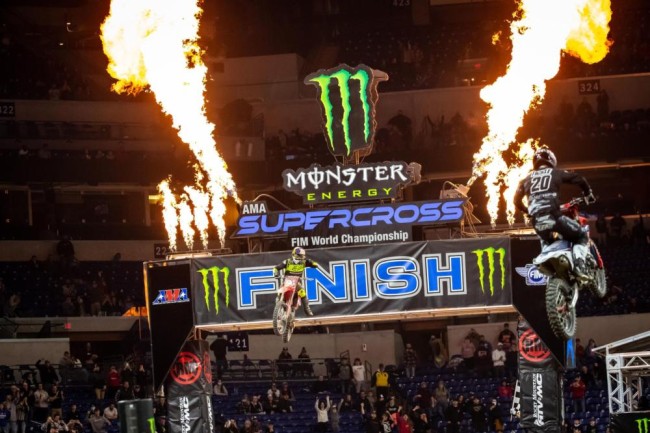 Ken Roczen finally got the win he has been threatening all year long and the joy in his and his wife’s eyes told the story of just how much it meant to him!

Yet again it wasn’t without drama as Roczen jumped off the track, had to let Tomac by then re-pass the defending champions and hold him off at the end to do, but importantly he did it and got the monkey off his back. Roczen has extended his points lead to six and looks the most comfortable guy on the track right now. This is what he had to say to the media on his night.

Jumping off the track and letting Eli past

Yeah. First off, in the air it was kind of funny how quick the mind works sometimes. In the air I was like, “Dang it!” I knew I was going way too far left. I also thought, Hey, I can brake and make it on the inside, but as soon as I got close to the landing I was like, There’s no way. So, I literally just decided instead of catching a Tuff Block or whatever, and also Eli was coming jumping so who knows? We may have collided as well. Then I went behind the berm and was just hoping for an opening somewhere to make it back in without losing a lot, a lot of time. But then obviously I had to go around the whole wall and then I was on the start straight. That’s where I had to let Eli by because I clearly was off the track, big, big time. I feel like it would have not been good to jump back in there and stay right in front of him. I just feel like that would have not been the right thing to do.

Honestly, I was just trying to stay there and with him because I didn’t just want to let this be the decider. Just found an opening and took it without planning it, by any means. It just was a really quick, short decision.

Finally getting the win

I’ve just had huge motivation to win in general. It had really nothing to do with what happened the last couple of rounds. I honestly forgot about it. Like I said, I’ve talked about it over and over that I really want to—especially it got hyped up even more and more, which was to be expected just because it was a big deal. But I was over it way before everybody else stopped talking about it, pretty much. So, I just wanted to win. That’s all I wanted.

I’m just trying my hardest. I’m definitely not getting on this thing of I’ve gotten two two’s and one one, I’m the guy now. I don’t really want to have my mind work that way at all. Coming into this, I didn’t really know what to expect because I changed everything up within me and my program. I shouldn’t say everything, but a lot. I just kind of wanted to see where I was at, and honestly enjoy the process and put the ego aside and just kind of rebuilt my whole, not image, but just rebuilt my career a little bit. So that’s what I did.

Yeah, that was the case. Obviously after Eli crashed it was Adam and I in front. I made a couple of attempts that also after that I was kind of just a little bit further back and not really in striking distance. But every time I was on his wheel, we were kind of yo-yo-ing a little bit and then I really heard Eli coming. I had to start riding defensive a little bit which really hurts you first off because the front guy can take better lines and you’re losing touch a little bit. But there were just a couple of spots that the way the start was laid out, they were just really open turns. If you tuck it really tight you just are not as good that way as like if Eli, for example, sets up and he goes wide and cuts down. I saw him next to me a couple of times. I just really needed to get by Adam. I wasn’t really sure where I was going to make it happen. Then I just dove to the inside and finally steered clear of that. But it was a good battle. Obviously with all three of us it was a little hectic there for a second, but it was fun.

It will be interesting. I just thought it was an odd build. We have these two big doubles in-between there. I think the day started off kind of weird, just because the free practice was a shit show, I thought. We were doing a few laps and then red flag, and the start this, start that. It was just weird. When I originally saw the dirt when we got our tests done, I’m like, it looks sick. It look a lot more loose, but then it got really rutted. I think that rhythm section was built really tight and steep. I thought the track was pretty gnarly with how many ruts that developed. Even on the big doubles and stuff, because I cross-rutted there obviously and jumped off the track. It will be interesting to see. They also watered it, I think, before the first practice this morning, so it will be interesting to see how it will develop in this next race and then how the build will be as well, if they’re building it as tight again. In general, the track was super basic, but just the ruts made it gnarly.

While we’re racing, you don’t have that much to think about. For example, when I was sitting out for outdoors, as much as I needed that break, but we’re used to it and done it our whole life. There’s just something about competing. We’ve done it 80 percent of our lives. Of course, it’s the fun, otherwise I wouldn’t do it. Especially now having family, it makes that whole thing even better. Honestly, I’ve just figured out a way again to just enjoy the process of trying to be my best and trying to win and doing all the stuff. There’s something about it that makes us keep coming back. At least for me, it kind of felt like a little bit of a new beginning. Of course, there’s anxiety, if you want to call it that, but that’s the nature of competing. That’s I feel like why we do it, with the adrenaline and getting antsy and things like that. I love that feeling. Now we’re doing it as a family which makes that even sweeter.

First win as a dad

It was the greatest thing ever. Obviously lately, even on the couple of second places, my wife wasn’t able, and my son weren’t able to come down there, but seeing them there as soon as I went down there, he’s just such a smiley bugger in general but as soon as I was looking at him and he was just smiling and laughing the whole time, it’s the best feeling ever. It really is. Hard to explain to somebody that doesn’t have a kid. It just gets better and better every single day, I feel like. Now that this was in our bag, was just a huge relief. I don’t even know what to say about it. It just makes my heart smile. Even in-between all the practices and the races and whatnot, we’re up in the semi here and just playing around, changing diapers in-between the practices. It kind of eases everything up a little bit.