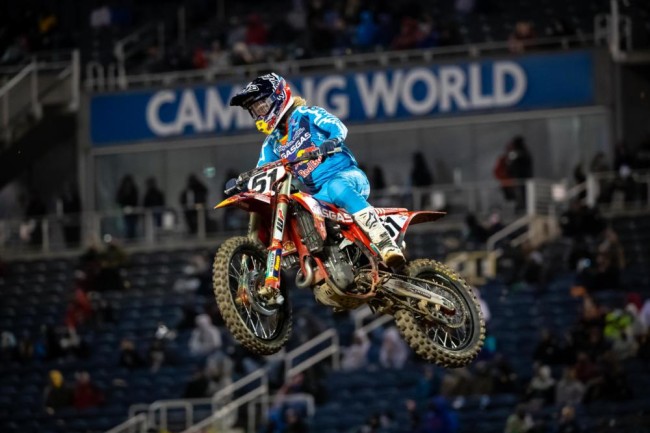 Justin Barcia: This was a brilliant turnaround for Justin Barcia after heavy crash in Q1 threatened to ruin his night. He was 18th fastest when he went out for Q2 and it looked like a disastrous night for the Gas Gas rider but Barcia is letting nothing disrupt his momentum this year and he pulled the starts he needed to get the job done. He held of Tomac then Roczen in the main to score a superb podium while riding in pain and third place that looked very unlikely earlier in the day. Barcia is consistently fast this season, and it might be the best year of his career so far indoors with his ability to push through bad moments and still be a podium threat.

“It was a tough day for sure, admitted Justin. “I had a crash in practice and kind of destroyed myself. I had to regroup and I felt like I got a little bit better. We made a lot of changes on the bike for the Main Event and I got off to a great start. I picked my speed up at the end of the race and I got into a flow, which was cool. For how the morning went, to be up on the podium was a solid race. Obviously, I want a lot more out of myself but it will be nice to have a week off, regroup and get the body right before heading to Daytona, which I’m excited for.”

Adam Cianciarulo: Yes he crashed out of the main event but after a disastrous race last week Adam looked back close to his best this weekend in Orlando. Fast all day AC got the start and pulled a little gap initially showing his determination to get his season back on track. Even when Webb passed him Adam still wouldn’t give in and wasn’t allowing Webb to pull to far away, then the mistake happened that cost him a podium but this was the Adam Cianciarulo we expect to see and his determination to put himself back in that position after a poor performance the week before has to be admired.

“Well, today certainly didn’t go the way we would have liked it too, acknowledge Cianciarulo. “We had some great momentum all day long. I qualified in sixth, finished second in the heat, and in the main event, I got such a great jump out the gate on my KX450 and was able to just lead some solid laps. Once Cooper (Webb) got by me, I was able to see some lines where he was a touch quicker than me and felt like he wasn’t getting away from me, but as I began to look for lines to try and make a pass back, a lapper threw off my whoop section and I miscalculated my jump into the whoops that resulted in me going down. It was not the way I wanted to end the night, but I can’t thank the Monster Energy Kawasaki team enough for their support on the good days and the bad days.

Cooper Webb: Here we are again with Cooper Webb, needing to deliver and doing just that. With Roczen buried in the pack Webb had to win to inflict maximum damage to Roczen in the points and he did just that. He didn’t panic with Cianciarulo’s early speed believing he could run him down, then clicked off his laps despite Cianciarulo and then Musquin never being to far away but you got the impression Webb was in control all night long. Just six points behind now and Webb has stolen the momentum in this championship – with half the championship left, the title fight is on!

Webb said: “This one is huge, back-to-back wins is amazing! It was a great race battling with AC [Cianciarulo] and great points for tonight. Marvin was riding great. I knew he was coming there at the end and I know how strong he is because we ride and train together every day. I felt like start to finish I was in my comfort zone just clicking laps away and it felt really good.”

Justin Cooper: Coming off a foot injury and shoulder injury Justin Cooper’s speed and execution at round one was more than impressive. Even after enduring a red flag while leading, Cooper didn’t let it fluster him and came out firing again to win going away and the rest have a lot of work to do to get on that pace especially when the rider closest in speed, teammate Jeremy Martin DNF’d on lap one. This was the best race of Justin Cooper’s supercross career – he dominated in style.

Cooper said of his win: “It feels awesome to get the win. That’s definitely the way you want to start the series. I had a foot injury coming in, so I was a little bit nervous about that, not having enough time on the bike, but it all started out well. I was fastest in all of the practice sessions. I just didn’t have my starts down. We didn’t really practice too many of those at home, so that was a struggle until the Main Event. Luckily, we pulled it off twice, so I’d say they came around at the right time.

“It was good to get out of this place safe. There’s always a lot of hype around the season opener. You don’t really want to throw away the championship at the first round. I got myself in a good position where I could ride my own race and was able to take it easy to the finish line. It was a pretty perfect night for me. “