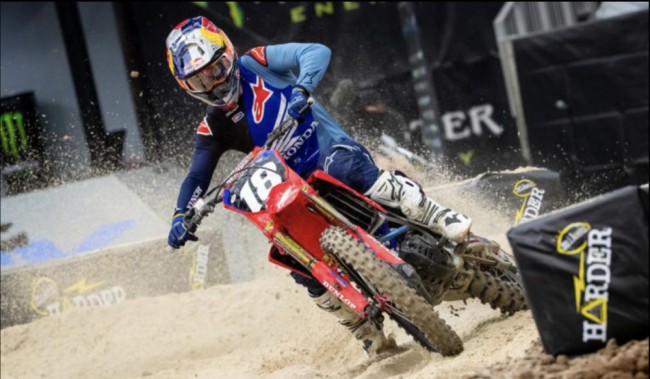 Jett Lawrence: What a ride by Jett Lawrence! The Aussie had all the hype coming into 2021, a lot admittedly created by himself and his social media presence and comments. But after a disappointing sixth place at the opening and getting passed by Forkner in the heat and the main, Lawrence showed just how confident and mentally strong he is too blitz the second round and win by 14 seconds easing away from the field with brilliant style and technique!

Lawrence said it was like playing a computer game and that he felt totally comfortable – and he looked it! The Australian teenager has stolen the momentum away from Craig and Forkner – and now he has even more self-confidence! It could be a deadly combination for the rest of the competition who will have to do everything they can to stop Lawrence winning on Saturday and really getting on a roll.

Dylan Ferrandis: Even Dylan Ferrandis can’t believe he got on the podium – but it’s shouldn’t come as a shock! The Frenchman showed in the 250 class he is one of the elite riders in America and when you have raced against the fastest rider on the planet in Jeffrey Herlings, it’s a bit puzzling that you should be intimidated by racing the 450 class in America – but it shows just how much the French grow up in awe of US supercross.

Ferrandis rode fantastic, making passes on elite guys and catching Osborne at the end, then taking advantage of the American’s crash to inherit second. Now just two points out of the championship lead and right in the mix for the title, Ferrandis is riding a wave of momentum and if that’s what he can do when he doesn’t believe in himself, he could go to the another level when he does!

Eli Tomac: This was a mature performance from Eli Tomac despite the pressure to win after his first round debacle. When Cianciarulo and Sexton sprinted away from him Tomac used his head and didn’t panic, he even stayed calm when Osborne was coming and lifted his pace at the end to ensure the win.

Tomac isn’t used to having other riders just spring away from him or reel him in but in a way this made his win more impressive and shows how the champ is in it for the long-game and isn’t going to over-react to other riders going all-out, he recognizes the depth of the class and thanks to his calmness and execution under pressure, Tomac is now right back in the mix for the title already in the points chase.

Justin Brayton: You can never write Justin Brayton off! 36 years old and riding for the Australian Muc-Off team, Brayton got yet another good and and rode strong for the entire 20 minutes and 29 laps, he didn’t even give and inch to his Honda mate, Ken Roczen, or the ultimate fighter, Cooper Webb, this was a brilliant ride from Brayton to score a podium in a deep class at 36 years old!

His technique has always been great for supercross and that no doubt helps him at his age, but you still need the fitness and the desire to do it and Brayton, with not racing motocross anymore, has kept the fire burning and when you can still ride like that there is no reason to quit! It is also great for the Australian team who have put a lot of work in to commit to doing the US series and this is a wonderful reward for their endeavors and justification for turning a distant dream into their reality.

Ken Roczen: They say you win your championships on your bad nights and after a terrible start Ken Roczen still moved through the pack on a tight track to take fifth a posityion that would have sw him take the red plate untilt he contorversial points deduction for jumping on a red criss flag that Roczen says he didn’t see thanks to frrandis blocking his view.

But the ride was still great especially when the German has been struggling with health issues. To see him coming through a deep field with purpose and precision shows that so far at least, his fitness is on point and that he could just be the man to beat for this title. He is good from the front and not good from the back, Roczen is ticking all the boxes so far.