Talking Point: AMA v FIM – the battle is on! 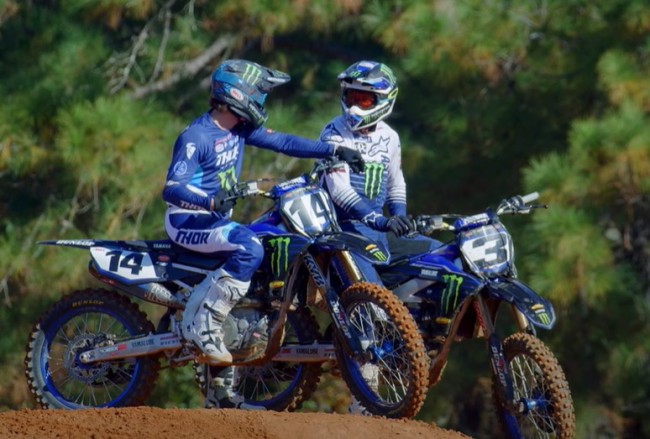 It’s all out warfare between the AMA and the FIM as the US industry announce a world Supermotocross championship to go against the FIM sanctioned World Supercross series that threatens to take away AMA riders from US motocross! This is all after the FIM split from co-sanctioning the AMA supercross series to go it alone with world supercross and big backing from SX Global promoters plus some huge prize money.

The biggest irony of all is that the FIM and Youthstream had the first idea of the Supermotocross championship but it was roundly shunned by the US industry and media as a bad idea, with too many races already and given very little coverage despite a good event that saw Dungey battle Herlings and Gajser for the unique title.

See the action below:

The bottom line was it was a good idea but you need the US industry behind it to make it work and now they are very much behind it to fend off the WSX threat – so I expect it to be a success.

Yeah, it’s bizarre…the WSX has united the teams like never before. Nobody wanted any more races for years, now we’re adding 2 more! (11 nationals next year, 3 SMX ones) https://t.co/dEe4uexfwU

With the big prize money on offer in WSX and Roczen rumoured to be on 250k per round this year, and the fact the schedule would run concurrently with the several AMA motocross rounds in 2023, it is a huge threat for MX Sports and the AMA with top riders potentially choosing to go supercross only all year round.

Now with the SMX in October alongside big prize money it creates a much bigger incentive and a new title to win and American’s, once again, don’t have to leave their own country.

The press release stated: The Monster Energy AMA Supercross Championship and the Lucas Oil Pro Motocross Championship will both continue to crown their own champions at the conclusion of their respective series. Afterwards, the top 22 250cc athletes and the top 22 450cc athletes in combined Supercross and Pro Motocross points will qualify to compete in the two SuperMotocross Playoff Rounds and World Championship round for the SuperMotocross #1 plate and sport’s richest payout.

The whole situation gives a great insight into how difficult it is for anything global to crack America, it’s why MXGP is still given relatively low level coverage in America, underpinned by a bizarre and factually inaccurate tweet by Steve Matthes trying to discredit the fact that MXGP is a real world championship.

Hey, MXGP is a “world” championship that doesn’t come to North America…who cares. Call it whatever you want, names are inconsequential https://t.co/GgnEMO06Ag

The irony being, that when MXGP did go to and race in America, and wanted to do more than one race, Steve complained about having too many US GP’s and that AMA riders had too many races already. With that attitude permeating the US industry, is it any wonder fans don’t show up to a US GP and riders don’t want to race it – it’s because they don’t value it as the world championship of the sport.

The bottom line is basically the two USGP's & the SMX cup are total bullshit races for USA racers. NO ONE CARES BRO

For fans of course, having the WSX series and the SMX in Oct/Nov is actually fantastic but sometimes it would be nice if the AMA and FIM could work together. Imagine if MX Sports joined forces with the FIM and InFront for the world motocross series, Feld and SX Global combined for the world supercross series and they all united for a 2/3 round SMX series?! That would be the dream.

Personally, I like the idea of this new look FIM world supercross series and the AMA Supermotocross series – hopefully the talent won’t be spread too thin and the racing will be fantastic and both can survive. Another interesting part is – will MXGP riders be tempted to get their US fix with the Supermotocross series? That could be a VERY interesting series if the likes of Herlings, Gajser and Prado join in!

As of now, the battle lines are very much drawn between the FIM and the AMA – let’s see what happens from here.